By Sourcementor (self media writer) | 9 months ago 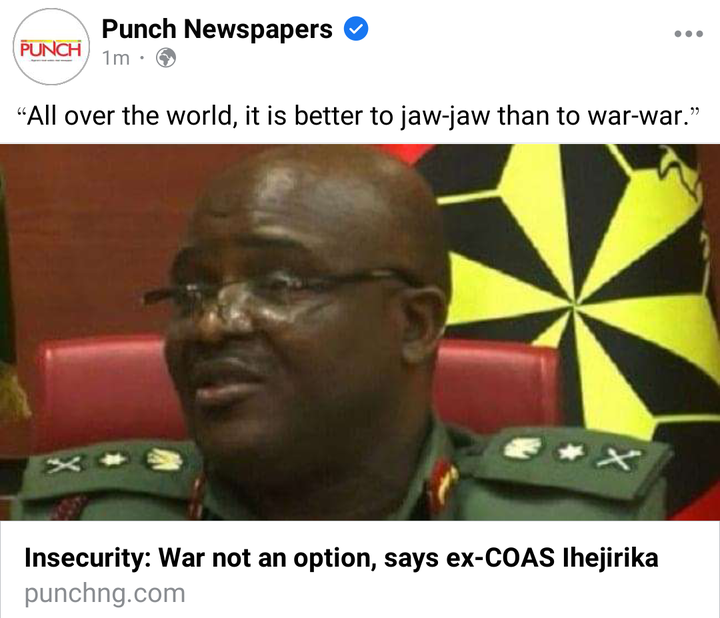 A former Chief Of Army Staff, Azubuike Ihejirika, on Thursday said that war was not an option over the insecurity bedevilling the country.

Ihejirika who spoke with journalists during the visit of the Chief Of Defence Staff to Owerri, Imo State, said that he was advocating dialogue as a strategy to returning peace to the country.

The CDS, Lucky Irabor, was in the state to meet with retired senior military personnel who are from the South-East zone to proffer solutions to the insecurities in the region nay the country.

Ihejirika advised the federal government to go to a roundabout with groups who were aggrieved with the system. 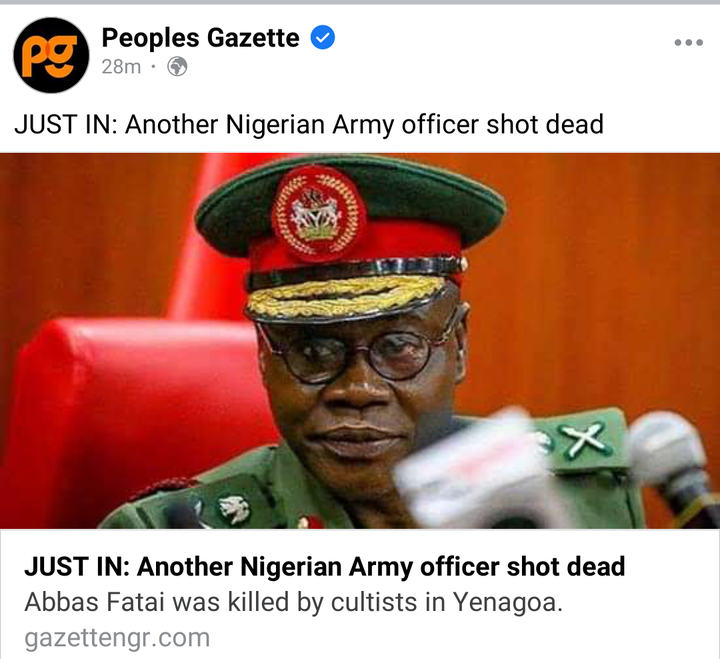 Mr Fatai was shot dead at about 09:12 p.m. on July 22, at Igbogene Junction in Yenagoa Local Government Area of Bayelsa State, where he resided, according to preliminary investigations by the army.

The cult group led by a man named Confidence attacked and shot the officer who was subsequently rushed to the hospital where he was confirmed dead. 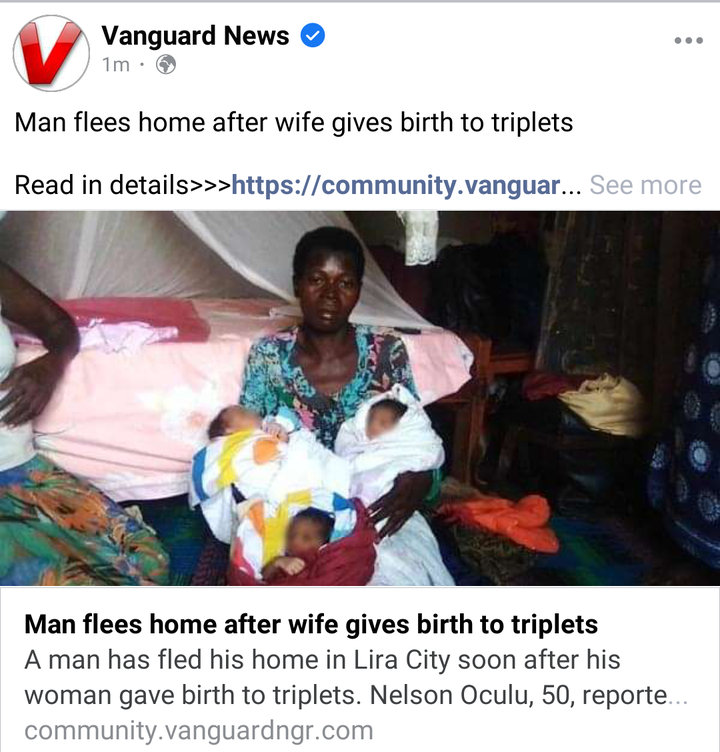 A man has fled his home in Lira City soon after his woman gave birth to triplets.

Nelson Oculu, 50, reportedly vanished from his home in Anai-Okii cell, Anai ward in Lira City West Division on Tuesday after receiving the news that his wife had given birth to three babies, all boys, Daily Monitor reports.

Ms Catherine Akello, 42, said that when she returned from Lira Regional Referral Hospital on Wednesday with her three bouncing babies, she found the door locked with a new padlock. She quickly sensed that there was a problem. 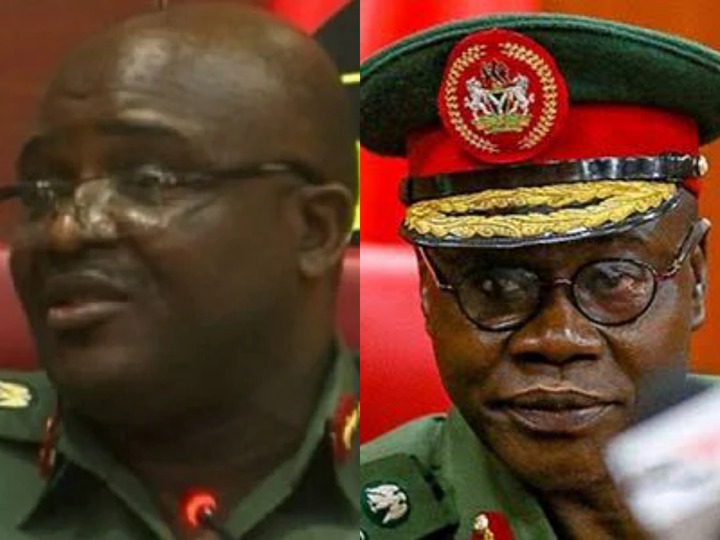 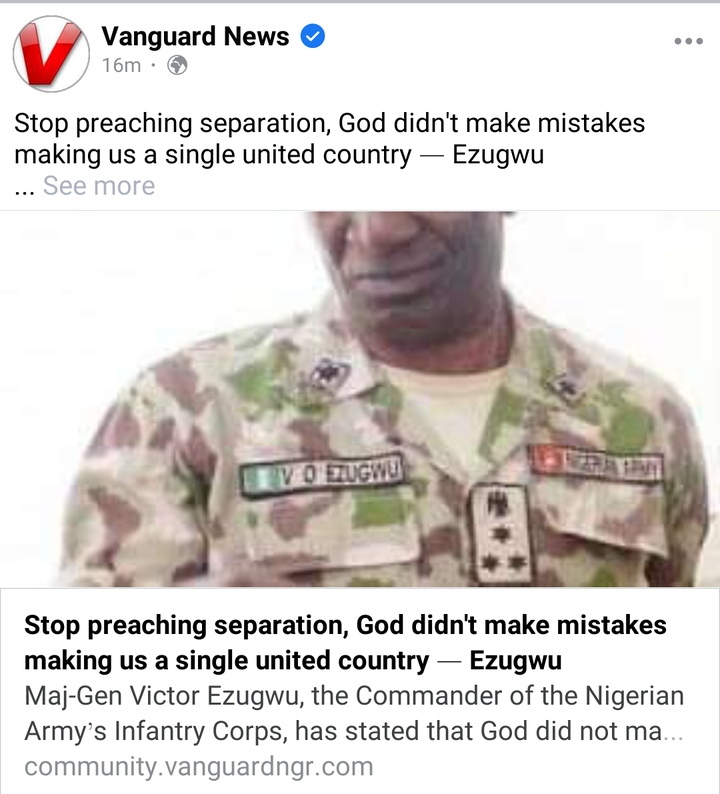 Maj-Gen Victor Ezugwu, the Commander of the Nigerian Army’s Infantry Corps, has stated that God did not make a mistake in uniting Nigeria and that Nigerians should preach against separation.

For a long time, many individuals and organizations have called for Nigeria’s division, particularly in the country’s western and eastern parts.

The General expressed confidence that the country would become more peaceful soon and urged Nigerians to refrain from calling for separation, saying that God had made no mistakes in uniting the country.

I could come to Daura anytime I like -Buhari 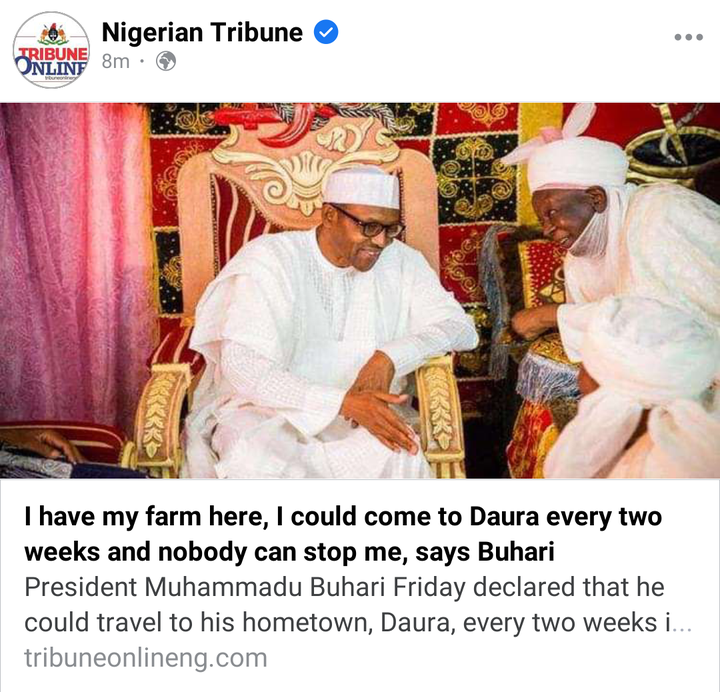 President Muhammadu Buhari Friday declared that he could travel to his hometown, Daura, every two weeks if he likes and nobody can stop him but there are constraints of cost and exposing security to weather.

He made the declaration when he visited the Emir of Daura, Dr Umar Faruk Umar, at his palace.

The president regretted his inability to visit Daura more frequently, assuring that his heart remains with the people. The Alara of Ilara Kingdom, in Epe Division of Lagos State, Olufolarin Ogunsanwo, on Friday urged the federal government to grant constitutional sovereignty to traditional institutions.

He told the News Agency of Nigeria (NAN) in Epe that this would lead to national prosperity.

Mr Ogunsanwo also advised the government to reinstate the roles assigned to traditional rulers in the 1969 Constitution.

The traditional ruler stressed that such moves would bring about national peace, harmony, progress and advancement to Nigeria.