Why Would Supposed IPOB Agitators Be Armed To The Teeth As Narrated By An Igbo Lawyer Onwughalu?

A prominent lawyer named Fabian Onwughalu, a former chairman of Ohaneze Ndigbo, Lagos branch had an encounter with supposed IPOB Agitators, he called them the supporters of Nnamdi Kanu, the self-acclaim leader of the proscribed Indigenous People of Biafra (IPOB). Onwughalu said the people he met in Anambra that trailed him to Nnewi were heavily armed with sophisticated weapons. 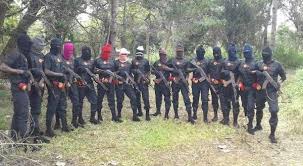 According to the story narrated by the cable, Onwughalu said the gunmen stopped him and query his Igbo citizenship, they asked him several questions before he was released. He was affirmative that the boys are armed to the teeth as he said they were wielding AK 49, machine guns, anti-aircraft missiles, Russian-made SMG, LA rifle, and pistols. Onwughalu even described one of the gunmen which was about 30 years old, who had an ammunition belt rolled around his body like a wrapper with two pistols by his trousers side pockets.

Many Nigerians have wondered why supposed agitators would have such sophisticated weapons? That is the reason the government has proscribed them as terrorists. These people are ready to kill and destroy the properties of people in the southeast geopolitical zone of Nigeria. Their recent activities across the zone are a testimony to that. These gunmen have attacked high-profile Nigerians in the southeast geopolitical zone of Nigeria.

According to different reports by the Nigerian Police and confession from arrested gunmen who were leaders of ESN, an armed wing of IPOB, they have carried out different attacks on police formations and critical infrastructure in the region. Of recent, Gunmen attacked and killed the husband of the late NAFDAC boss, Dora Akunyili. A few days ago they attacked one of the House of Assembly members that decamped to APC from APGA and others. The gunmen killing and destroying critical infrastructure in the southeast geopolitical zone of Nigeria in the name of agitation should shelf their sword and embrace peace with the people.