Where is the swagger stick of Inspector General of Police Usman Alkali?

At every Independence Day anniversary in Nigeria, the tradition has always been for the Federal Government to roll out activities for the celebration which will culminate in the grand finale on the main day. Sometimes, the programme can last for one week while in some other cases, it can last for three days.

During the grand finale of the Independence Day ceremony on October 1, it is expected that there will always be a military parade while the service chiefs are expected to be fully dressed in their official uniforms.

Other service commanders are also expected to be at the venue of the celebration for the ceremony as the president will always be in attendance. Sometimes, there is always a change of presidential guards. 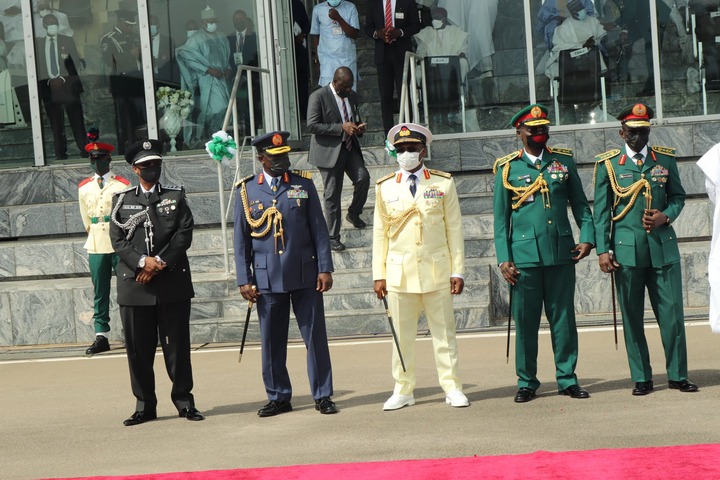 The situation was not different during this year's Independence Day ceremony on October 1, where President Muhammadu Buhari led other dignitaries to hold the ceremony at the Eagle Square, Abuja, where he also signed the register of participation.

At the ceremony were the service chiefs who were led to the event by the National Security Adviser, retired Major General Babagana Monguno.

However, one unusual thing observed during the Eagle Square ceremony was that while all other service chiefs held their service swagger sticks, which are their symbols of authority, the Inspector General of Police did not have any swagger stick.

This is contrary to the situation in the past when all other former Inspectors General of Police held their official swagger sticks during Independence Day ceremony.

The swagger stick, according to Wikipedia, is a short stick usually held by a top uniformed person as a symbol of authority at official functions. The stick took the form of a short cane of polished wood, with an ornamented metal head of regimental pattern. Its use derives from Roman centurions who used it as an emblem of office.

What this implies is that at every formal occasion when service chiefs are fully dressed in their official uniform with their full ranks, they are expected to carry the swagger sticks with them as symbols of authority and as emblems of office.

However, during the ceremony at the Eagle Square on Friday, while other service chiefs were in their full regalia and carried the swagger stick as symbols of authority, the Inspector General of Police, who was also fully dressed in his official uniform with his rank, did not come with his swagger stick.

This definitely indicates that the Inspector General of Police did not remember to take it along with him to the venue of the ceremony and his aides did not remind him about it.