By Religiousbeliefs (self meida writer) | 1 months 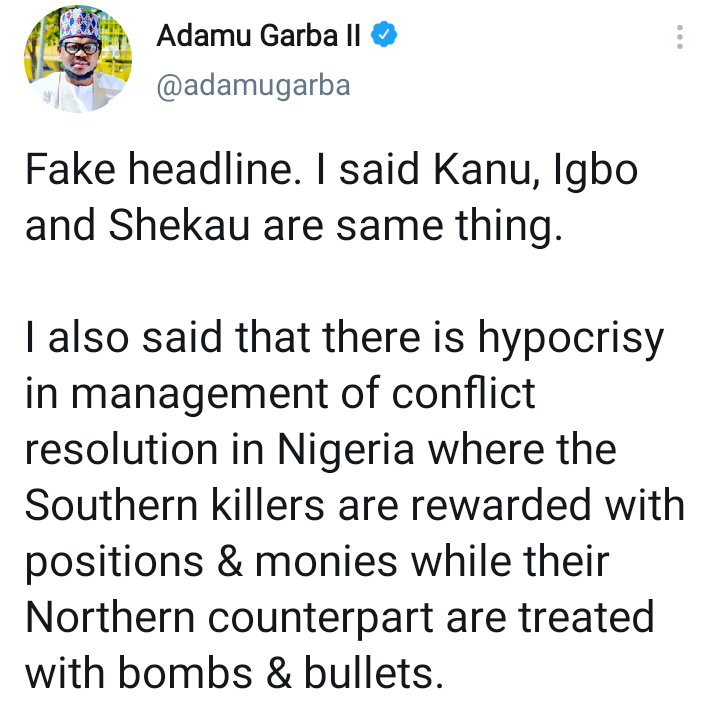 I also said that there is hypocrisy in management of conflict resolution in Nigeria where the Southern killers are rewarded with positions & monies while their Northern counterpart are treated with bombs & bullets.

Early Adamu Garba said that he has been frustrated with many things happening around.

It appears some people are hell-bent on converting Nigeria to animal kingdom where affiliation are along tribal lines than common humanity. Crime is no crime provided committed by my tow man. A very dangerous move

It may play out well for a short time, but same townman you are trying to encourage will one day have no blood of your imaginary enemies, hence he will now extend his blames on not sharing same local Govt, dialect or even street with them. We should learn from Dahomey Kingdoms.

See mixed reactions as adamu garba reactions a reporter on what he said earlier today.

...federal government are now being rewarded by positions and monies as you claime, while the Northern terrorist that has been terrorizing the whole nation and getting negotiations from both the federal and state governments while working freely around the country are now...

Kanu and Igboho are fighting for their people.Who is shekau fighting for? Shekau in most of his videos is fighting Jihad. to kill infidels.Adamu the headline is perfect.All you fulani are same. murderous in nature.only Kanu and igboho stopped you guys from killings in the South.

You're still repeating what's in Headline. Kanu & Igboho are Freedom Fighters. High point is your temerity to compare them with one of World Most Wanted& 2nd Most Dreaded Terrorist, Who have taken responsibility for mass murder of over 30k Nigerians? You must be a member yourself

Idris Died In Battle, He Gave His Life In Defence Of His Nation - FFK

'No Yoruba Indigene should be interested in National Census'- Koiki Olayomi

General Mahamat Idriss, A Son To Late President To Take Over As Military Head (Photo)