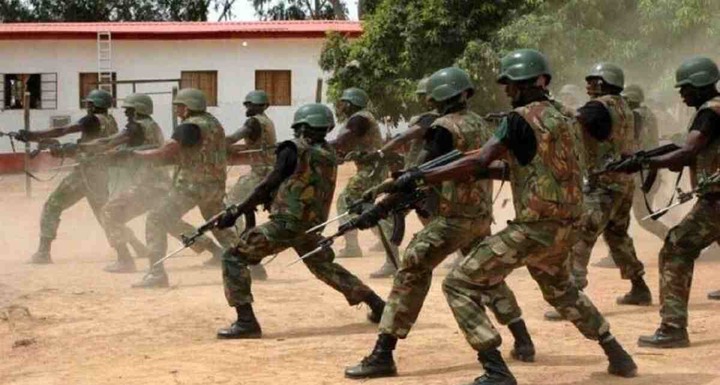 A resigned Nigerian soldier has alleged he was gunned down by his colleague for always killing Boko Haram members.

The anonymous soldier told Journalist Sandra Ezekwesili that the Nigerian Army needed to be investigated because there was “low morale” and sometimes soldiers were not paid as and when due.

He also alleged that there were people gaining from the prolonged insurgency in the North, recalling that during his stay in the army he was barred from communicating with his family. “My father thought I was dead.”

The ex-soldier said: “I was in the battalion and we were fighting Boko Haram, Sandra. I’m a left-handed person, so I’m a sniper. I was one of the best snipers that was shooting. I was fighting and I was shooting, one of our soldiers shot me in the ribs. He said that I killed people too much.”

Recalling further he said that during the fight, a woman and her daughter were killed and he was trying to save the second daughter. “I was running, they shot me. I was barely breathing. It took the grace of God for me to survive,” he told the journalist, who was anchoring the programme ‘Hard Facts’ on Nigeria Info 99.3FM.

There has been a sharp division among social media users after the audio conversation was shared online with some saying his claims seemed likely to be true while others dismissed it outrightly.

A Twitter user wrote: “Though I didn’t listen yesterday but seeing this now made me remember why I refuse joining the 65th and 66th recruitment in 2011 and 2012 when I was in 241 recce battalion in nguru yobe state. We had the privilege of been friends with some soldiers who relayed devastating details of the tribalism and evils perpetuated in the military.

Another user said: “This guy [Ex-soldier] is obviously lying ….soldiers in NE are paid their RCA as at when due or at times with little delays especially when one is newly deployed. I doubt if he has ever attended a basic or even advanced Snipers course.”

And another said: “When I was serving in Kogi state I was opportune to meet a soldier that was recuperating from a gunshot he relayed many of his experiences like this one you brought to limelight. If there are not people feeding fat from the invasion of Bokoharam then they should have been out!”

3 Things A Blind Volunteer Teacher In Kano State, Dahuru Idris Has Gotten In The Past Few Weeks