Did The Army Commander Who Gave Kill Anyone You See Order Put His Emotions First?

By Therealthing (self media writer) | 1 day ago 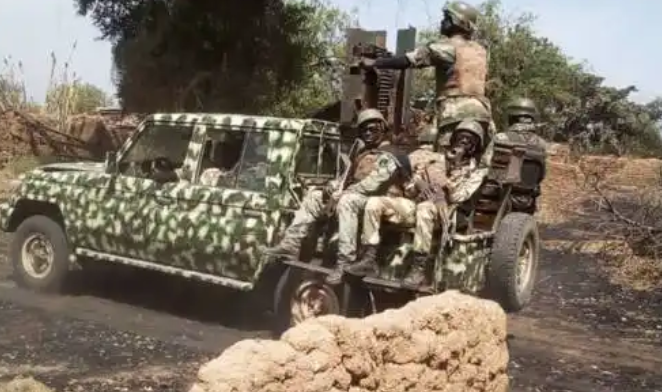 Many of us would have seen the viral video that recently surfaced online of an army commander giving orders to his soldiers to kill anyone they see.

As reported by ejesgist who posted the video, it was said to have been taken when the army invaded Izombe, a community that is in Oguta, Imo State.

We all recollect that Vanguard recently reported there was a clash between soldiers and some youths who were suspected to be oil smugglers in the Izombe community in which two soldiers and one member of the community died during the clash.

Due to the circle of repeated violence, more troops were sent to the community to maintain peace and apprehend perpetrators of the crime but things might have taken a different turn as it seems the people in the community are no longer safe in the hands of the soldiers.

As seen in the viral video, there was a military vehicle that was already burnt, as no tires could be seen which might have contributed to the army commander's anger of the ongoing recent clashes between the soldiers and some youths of the community as he gave his soldiers the command to kill whoever they see.

As the soldiers cracked their guns while shouting "let's go, let's go", the commander could be heard in the background of the video saying "anybody you see kill", a hurriedly made decision which meant the soldiers should lay waste to anyone they met on the way with no exception to if the person partook of any of the recent atrocities in the community or was a resident of the town.

Did The Army Commander Put His Emotions First?

The Army commander put his emotions first as he let the recent atrocities perpetrated against the Army in the community cloud his better sense of reasoning to only lookout for and apprehend perpetrators of the crime rather than order the killing of anyone who comes into sight, as they might end up killing easy going and innocent civilians whom they are meant to protect.

What is your take on this? Please do make sure to leave your comments below and share this article if you found it interesting.