Forget Smart Bombs: The US Air Force Gets Ready to Test Its New Thinking Bombs 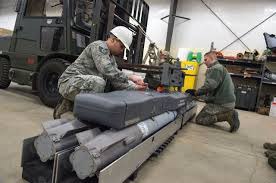 The Air Force Is Moving From Smart Bombs to Thinking Bombs

The munitions can change attack plans while en route to their targets. 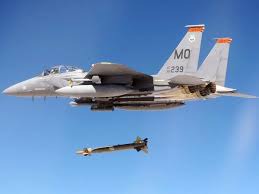 The Golden Horde is a munition concept of the US Air Force capable of firing multiple weapons at ground targets from an aircraft. The Air Force says it is preparing to test the new “swarm” munition. The Golden Horde is an advanced weapon that can think. The project aims to show weapons can work together in self-directed swarms according to a set of predetermined rules.

The Air Force has selected variants of the Small Diameter Bomb I and Miniature Air Launched Decoy as the initial demonstration weapons for the Golden Horde swarming munitions vanguard program, according to a service spokeswoman. Ilka Cole referred to these variants as "Collaborative" Small Diameter Bomb 1 and "Collaborative" Miniature Air Launched Decoy. The Air Force will begin the first simulations and flight tests this fall, leading to an integrated capstone event with CSDB I and CMALD weapons next summer.

Here’s the concept; this is a kind of armament that can reroute or change their targets even when already fired and airborne, according to newly-received information, thereby making on-the-spot decision about which targets to hit. Consider the following scenario:

A USAF fighter pilot closes in on an enemy coastline, on the deck, trying to avoid detection and enemy ground-to-air missiles.

Bingo! The target is in range … lock on … fire … four GPS-guided bombs are headed in to a target.

As the weapons swarm toward their destination, they share information about their surroundings. One of the munitions sights a higher-priority target nearby.

Instantly, the game plan changes — the bombs’ programming now directs two of the weapons toward the high-priority target, while the rest carry out the original strike.

All on their own, without any human interaction — literally, weapons that can think for themselves.

The Golden Horde weapons system is a leap forward from “smart” weapons to “thinking” weapons. As reported by Defense News, the US Air Force Research Laboratory will test the innovative weapon between September and December this year, using a Collaborative Small Diameter Bomb (CSBD), one of the two munitions the Air Force is developing in the Golden Horde program. The strike will be fired from an F16 during the weapon test.

Small Diameter Bomb (SDB) is a 250 lb (110 kg) precision-guided glide bomb that is intended to provide aircraft with the ability to carry a higher number of more accurate bombs. The original SDB (CSBD1) is equipped with a GPS-aided inertial navigation system to attack fixed/stationary targets such as fuel depots, bunkers, etc. The second variant (Raytheon's GBU-53/B SDB II) will include a thermal seeker and radar with automatic target recognition features for striking mobile targets such as tanks, vehicles, and mobile command posts.

Col. Garry Hasse, Director of AFRL’s Munitions Directorate says the Golden Horde is the Air Force’s vision to determine the potential of autonomous munition networking even after the “gun” has been fired. This is an essential move toward armaments that can think for themselves using predetermined rules based on AI (Artificial Intelligence). This munition post-launch interaction is what the service calls “playbooks,” allowing the weapons to make semi-autonomous decisions. 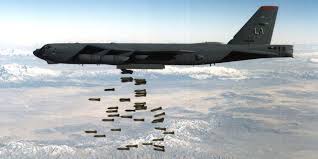 Imagine that a U.S. Air Force fighter pilot closes in on a target, she fires four GPS-guided bombs. As the weapons swarm toward their destination, sharing information about their surroundings, one of the munitions sights a higher-priority target nearby. Instantly, the game plan changes — the bombs’ programming now directs two of the weapons toward the high-priority target, while the rest carry out the original strike.

The ability of bombs to reroute themselves to unplanned targets will result in a more resourceful use of munition and an increased rate of operation success. Golden Horde-enabled weapons largely eliminates the need for human pilots to make multiple passes or reruns on their targets since the weapons fired can intelligently distribute themselves. This technology is handy both for airstrikes and anti-air defence purposes. Golden Horde can help when air defence is outmaneuvered or caught by surprise by the first airstrike.

Also, Fighter jets can, instead of bracing themselves to make multiple passes against an increasingly alert adversary, pilots can release their “thinking” weapons and then concentrate on flying their jet home. The deployed bombs does the rest of the work, distributing themselves among multiple targets.

The Golden Horde “Playbooks” technology does not imply fully autonomous munitions. In other words, Golden Horde does not guarantee that “bombs away” will search and mark new targets all on their own. However, the system can independently prioritize between existing targets. The swarm can be programmed to go for target B if A is not available (or A is a less-risk), or team up with missile 4 to hit target C. It's reasonable to assume this might eventually grow to include new, last-minute targets selected by human battle managers.

Is Golden Horde a danger to civilians? Not more than any other weapon system. A target attacked by Golden Horde faces just as much destruction as one attacked by a human pilot. The larger issue is the target vetting process and ensuring targets that needlessly risk civilian lives don’t pass the approval process, Popular Mechanics reported.

The capacity for an actual thinking weapon is a novel weapons technology. Similarly advanced weapons are “smart weapons” capable of identifying targets by the use of onboard maps, GPS data, and lasers. America’s Golden Horde is leap forward from “smart” weapons to “thinking” weapons. The Golden Horde may not have human-level cognitive thought but the weapons do think for themselves using a predetermined set of rules.

A pilot’s experience launching the CSDB-1 or CMALD should be about the same as the baseline version of the weapon, with mission-planning teams working to preprogram the networked munitions with information about its rules of engagement ahead of takeoff. Some members of the public are nervous of lethal autonomous weapons (LAWs), which are a type of autonomous military robot that can independently search for and engage targets based on programmed constraints and descriptions. Such people can find solace in the Golden Horde’s Playbook which effectively restricts the autonomy of the thinking weapon.