Here is the true story behind the angels of Mons who fought in world war 1.

Here is the story behind the angels of mons.

World was 1 was just getting started in August 1914.The German soldiers were preparing to invade France,but first they first had to pass through the British expeditionary force.They were very out outnumbered and the British had more experience and they met the Germans at Mons Belgium.The British expeditionary forces managed to hold them a bit,but unfortunately they were forced to retreat. 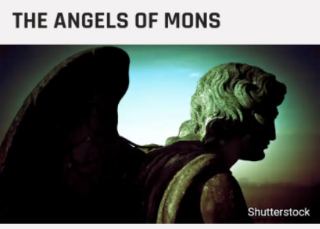 That's a fascinating story, according to many, Mons was a British victory.When the going got tough,it is believed that a band of angels descended from the heavens and decimated the Germans.This story spread across Britain and news papers,churches courtesy of books.Many of the faithful believed that other worldly beings had shown up with flaming sword at Mons, how did this celestial story get started.

Well its through BS journalism.Weeks after the battle a fiction writer called Arthur machen,strongly write a story called the bow men.In this mystery tale, ghostly medieval archers appear at Mons yo help fight the German.The story was made up,the bowmen sold the seeds for what happened next

In April 1915,a story made up published as a group of as a troop of angels was published in numerously newspapers.In the article, it was written that two unarmed men reported seeing angels on the battle field.Things became more confused when another published that every soldier had seen divine beings.In 1931,brigadier general published the letters he write during the war,one mentioned the angel but many believed the story was made up after the war for propaganda purpose.

Well looks like the bowmen stirred up a very big over reacting from people.While the story grew more and more over the years, the truth is that it all got started with a silly short story.