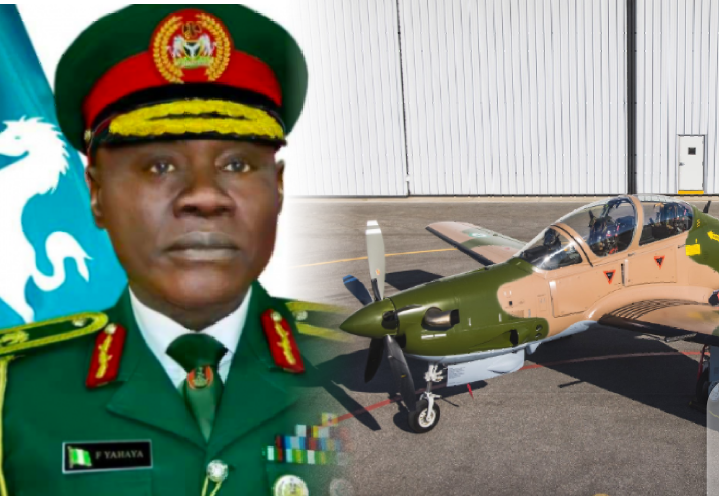 Following the recent attack by bandits on Goronyo market in Sokoto state which resulted in the killing of 40 persons, the Chief of Army Staff, Lt. Gen Faruk Yahaya on Monday commenced an operational visit of the 8 division area of responsibility with a charge to troops to redouble their efforts in routing the bandits from their camps and enclaves.

The COAS gave the charge just as the Governor of Sokoto State, Right Hon Aminu Waziri Tambuwal stressed that the recent attacks on Goronyon village was quite disheartening and therefore informed the need to review strategies of military operations in the zone to prevent a reccurrence. 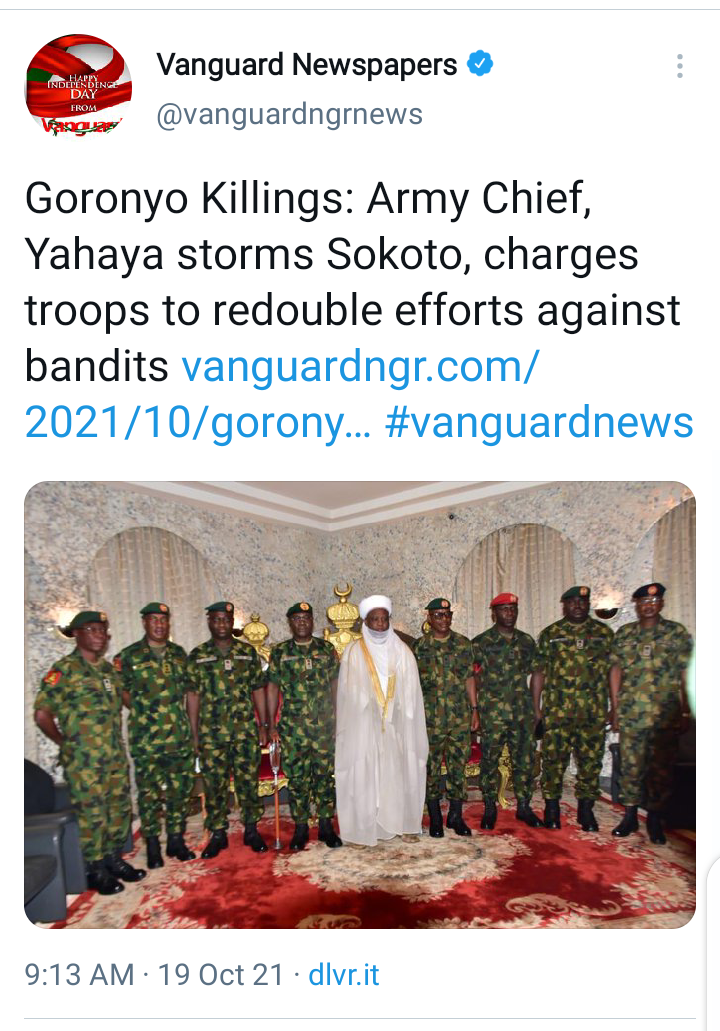 On his part, the Sultan of Sokoto, Alhaji Muhammad Sa’ad Abubakar urged the COAS to mobilize every available resources at his disposal to confront the adversaries of the state.

Speaking during a courtesy visit to the governor, Lieutenant General Faruk Yahaya assured, that the NA will not disappoint the government and people, as effort is ongoing to reorganise and rejig the operations in the Northwest.

The Federal Government says it has taken delivery of the final batch of the 12 A-29 Super Tucano fighter jets expected from the United States.

The Minister of Information and Culture, Lai Mohammed, disclosed this on Monday when he featured on a phone-in programme of TV Continental, “This Morning,’’ monitored by the News Agency of Nigeria (NAN). 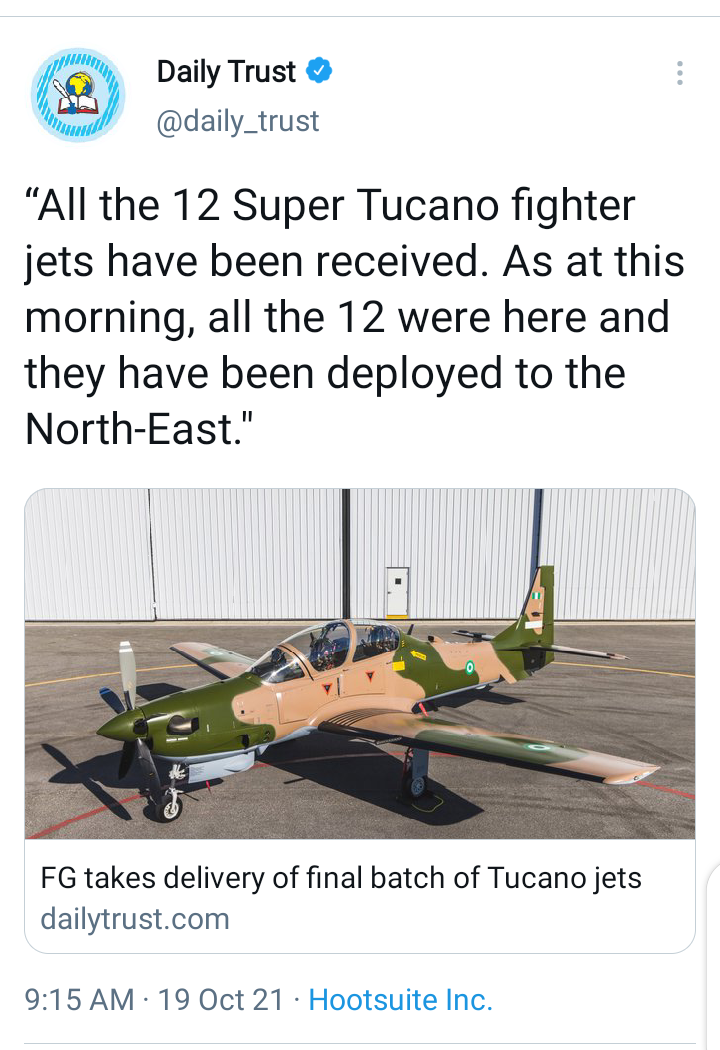 “All the 12 Super Tucano fighter jets have been received. As at this morning, all the 12 were here and they have been deployed to the North-East.

“We can see that the Tucano jets are actually game changer.

“Most of the successes we’ve recorded in recent time is because of the acquisition of the new platforms, not limited to the super Tucano,’’ he said.

Former President, Goodluck Jonathan has reacted to the death of General Colin Powell, a former United States Secretary of State and Chairman of the Joint Chiefs of Staff.

Recall that Powell died on Monday at the age of 84. 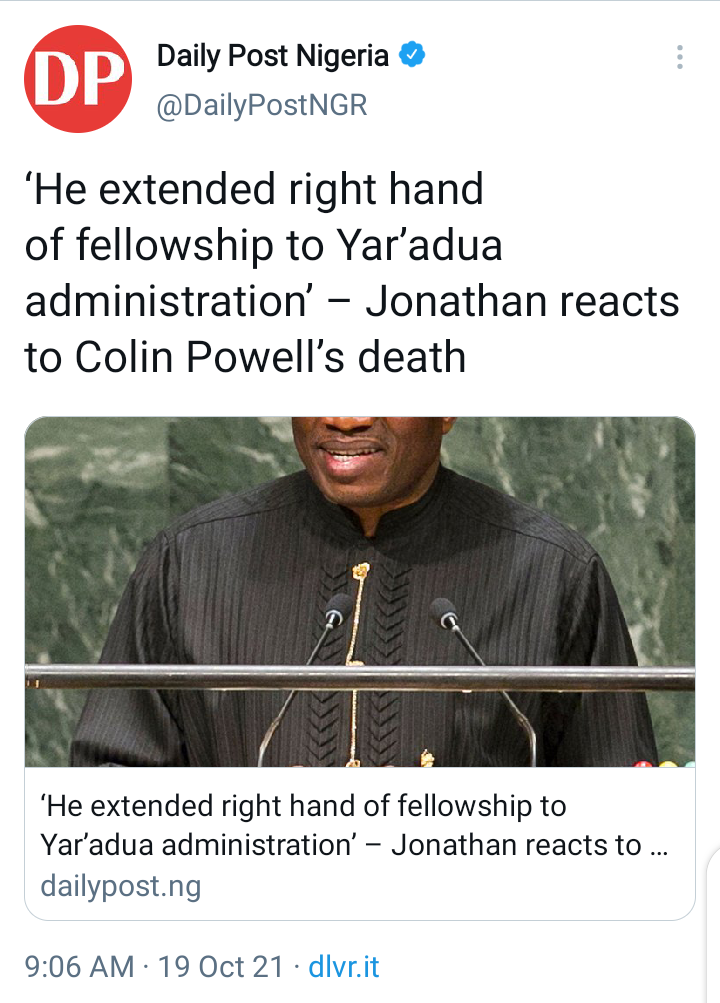 Jonathan, in a tribute he personally signed in Abuja on Monday, described Powell as a great leader and a famous US public servant, who left indelible and solid footprints in the sands of time.

He disclosed that Powell’s stellar military career paved the way for other African - Americans to reach for the top.

Niger State Governor and Chairman North Central Governors Forum (NCGF), Abubakar Sani Bello has advocated the need for Muslim Ummah to reflect deeply over the unique conduct and lifestyle of Prophet Muhammad (peace be upon him) as they join their counterparts worldwide to mark this year’s Eid-el Maulud. 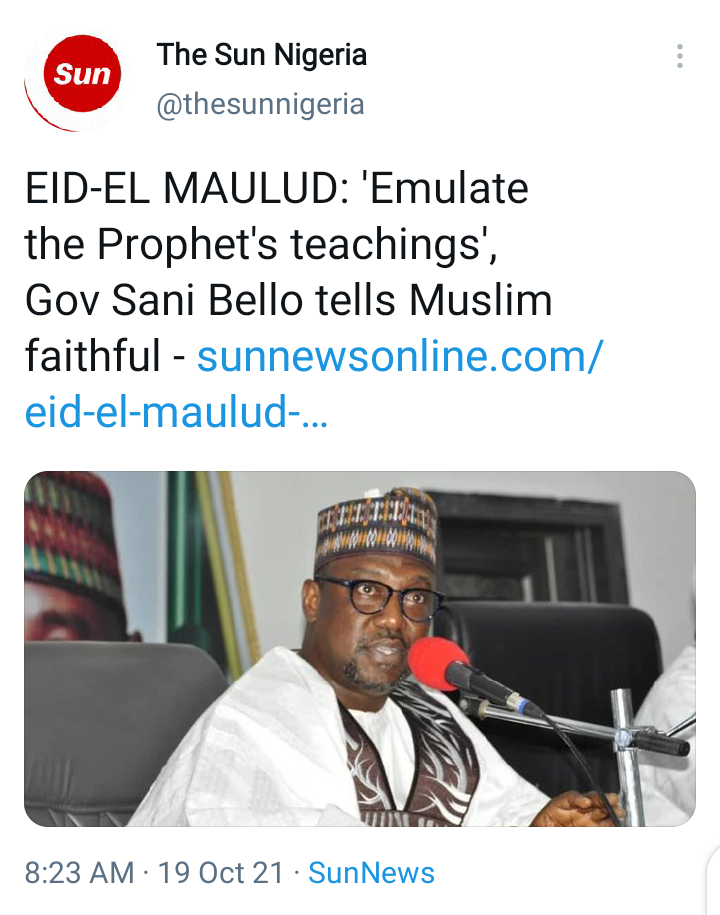 The Governor in a message to issued by his Chief Press Secretary, Mary Noel-Berje to commemorate the birth of the Holy Prophet Muhammad, said imbibing the spirit of love, patience, perseverance, humility, honesty, generosity and above all putting others first would guarantee peace, unity and Nigeria would be a better place to live in.

Governor Sani Bello explained that the life of Prophet Muhammad (peace be upon him) from birth to his death is a great lesson, hence the Holy Qur’an which remains the main source of truth and knowledge in Islam was revealed through him, while his teachings help humanity to become the best possible servants of Allah as well as a panacea to the challenges confronting mankind.