UK and US withdraw Troop from Afghanistan.

By Newscaptain (self media writer) | 10 months ago 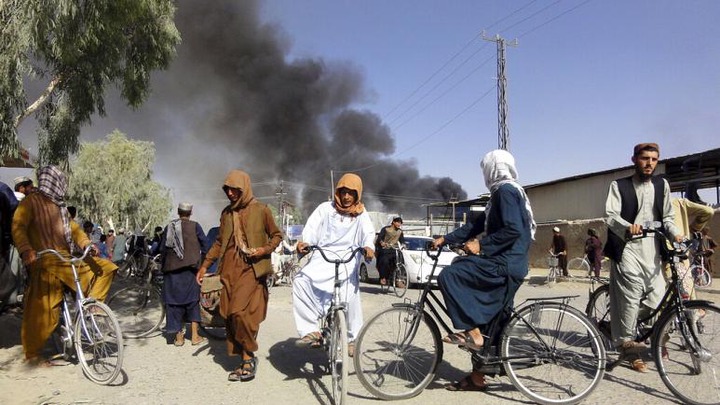 Smoke arising from after fight between Taliban and Afghan soldiers in Kandahar, southwest of Kabul.

UK and US withdraw fighting troops from Afghanistan despite the current security issues faced by the people and government of Afghanistan. you may wonder if the country will not be devour by the Taliban group who are imposing brutal attack on the Afghan people especially the women with reasons being that they are defending the sharia law. Amid the tension caused by the Taliban's, the UK and US have decided to pull out their troops from the country.

As gathered from the Euronews,this sudden withdrawal of the British and American troops has led to the Taliban overpowering most cities leading to people leaving their house and property.

The UK's defence secretary, Ben Wallace stated that he was worried that Al-Qaeda who was once sheltered by the Taliban could return to Afghanistan. He admitted that the withdrawal of the US and British force posed a lot of strategic problems and agreed the was a risk of a renewed security risk to western populations.

In his statement, Wallace further added that he had previously criticised the 2020 deal struck by the Trump Adminstration with Taliban as not the right thing,but he defended the British troop withdrawal as the solution has to be international for Afghanistan.

Former military veteran minister Johnny Mercer who served as a soldier in Afghanistan said the UK had chosen defeat describing the lack of political will as shameful, sad,humiliating for the British army and above all a tragedy for the Afghan people.

Content created and supplied by: Newscaptain (via Opera News )