Reason Why The Govt Should Be Careful Of The Repentant Bandits

By AnointedInk (self media writer) | 11 months ago

According to a report reaching our desk from a reliable source, the Defence Headquarters disclosed that no fewer than 5,890 terrorists and their families have surrendered to troops of Operation Hadin Kai in the North East as a result of the military firepower. Bernard Onyeuko, the Acting Director of Defence Media Operations, said this at a briefing on the armed forces' operations across the country on Thursday in Abuja. Mr. Onyeuko stated that the army has continued its operations against the militants and that the kinetic and non-kinetic tactics had forced the terrorists to surrender in large numbers. The Nigerian army has done an outstanding job fighting this terrorist organization to the point where they have no choice but to surrender. This shows that the federal government and the military are working together to put an end to all violent groups wreaking havoc in the country. We can obviously see that the Buhari administration is doing everything possible to ensure that Nigeria returns to peace. 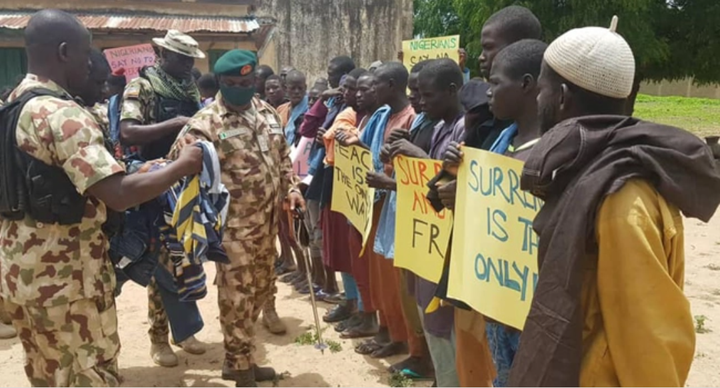 1. There are some of the reasons why the federal government should no longer trust repentant Boko Haram and bandits. The federal government should not only accept them; it should investigate them properly to see if anything arises from their minds. Because this dangerous group may have hidden agendas, they should never trust or accept them as they are. This murderous gang should not be given entire faith in their repentance; instead, they should be held accountable for their crimes.

Recall how the Katsina State Police Command nabbed three repentant bandits in Ingawa Local Government for robbery. So this is sufficient reason for the federal government to be careful of repentant Boko Haram and bandits and hold them accountable for their horrific deeds; this gang has killed many people and damaged property.