They are always combat-ready, here are the photos of Armenian soldiers and their weapons

Armenia is a nation, and former Soviet republic, in the mountainous Caucasus region between Asia and Europe. Among the earliest Christian civilizations, it’s defined by religious sites including the Greco-Roman Temple of Garni and 4th-century Etchmiadzin Cathedral, headquarters of the Armenian Church. Khor Virap Monastery is a pilgrimage site near Mount Ararat, a dormant volcano just across the border in Turkey. 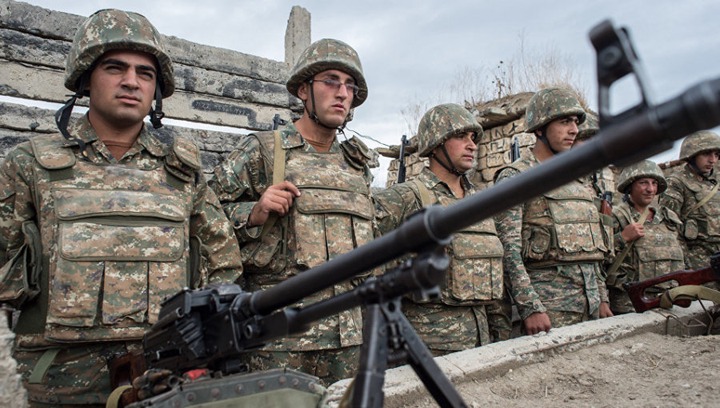 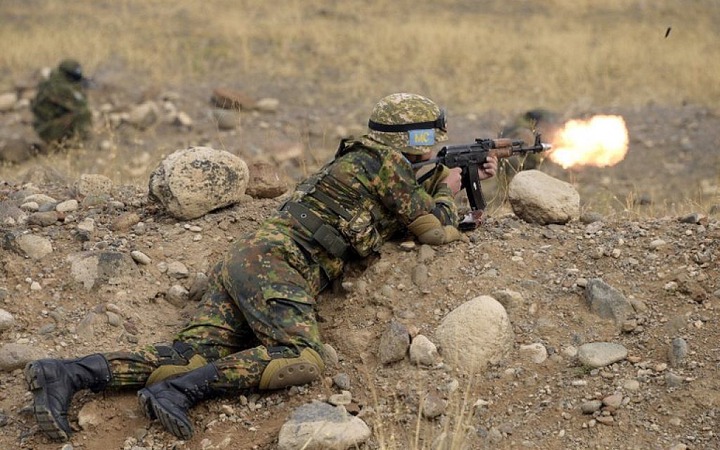 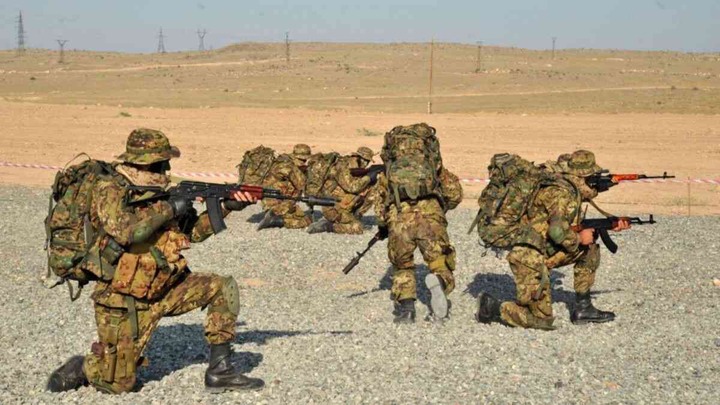 The Armed Forces of Armenia comprise two services: the Army, and the Air Force and Air Defense (a unified branch). Though it was partially formed out of the former Soviet Army forces stationed in the Armenian SSR (mostly units of the 7th Guards Army of the Transcaucasian Military District), the military of Armenia can be traced back to the founding of the First Republic of Armenia in 1918. Being a landlocked country , Armenia has no navy.

The Commander-in-Chief of the military is the Prime Minister of Armenia, Nikol Pashinyan. The Ministry of Defence is in charge of political leadership, headed by Davit Tonoyan, while military command remains in the hands of the general staff , headed by the Chief of Staff, who is Lieutenant-General Onik Gasparyan . Armenia established a Ministry of Defence on 28 January 1992. 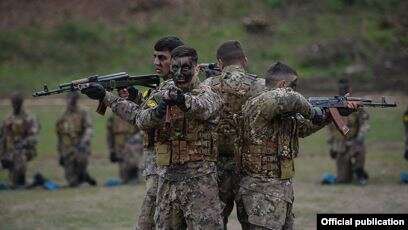 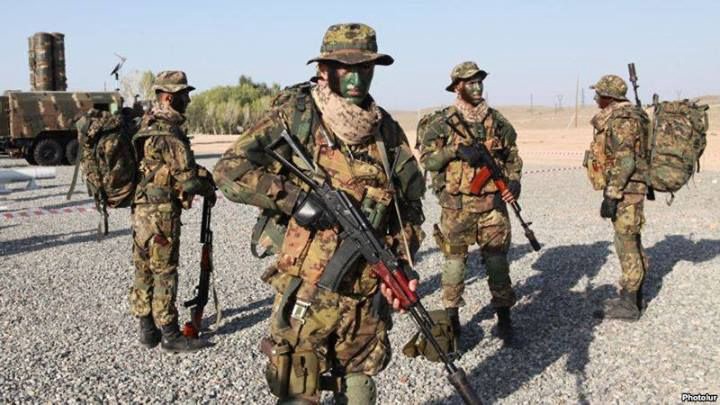 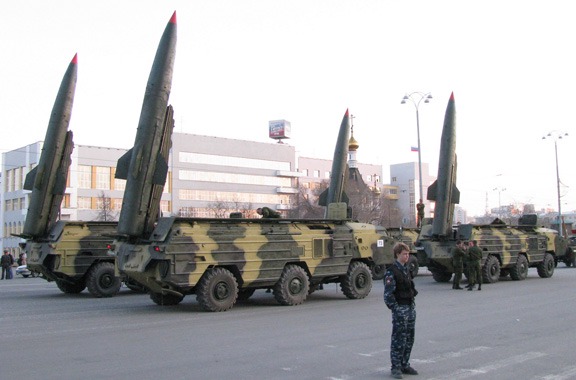 Border guards subject to the Ministry patrol Armenia's borders with Georgia and Azerbaijan , while Russian troops continue to monitor its borders with Iran and Turkey. Since 2002, Armenia has been a member of the Collective Security Treaty Organization. Armenia signed a military cooperation plan with Lebanon on 27 November 2015.

The Armenian Armed Forces are Headquartered in Yerevan , where most of the general staff is based. Headed by Chief of Staff Onnik Gasparyan, the general staff is responsible for operational command of the Armenian Military and its two major branches. In addition to the services listed above, Armenia established its own Internal Troops from the former Soviet Interior Troops after the dissolution of the Soviet Union. 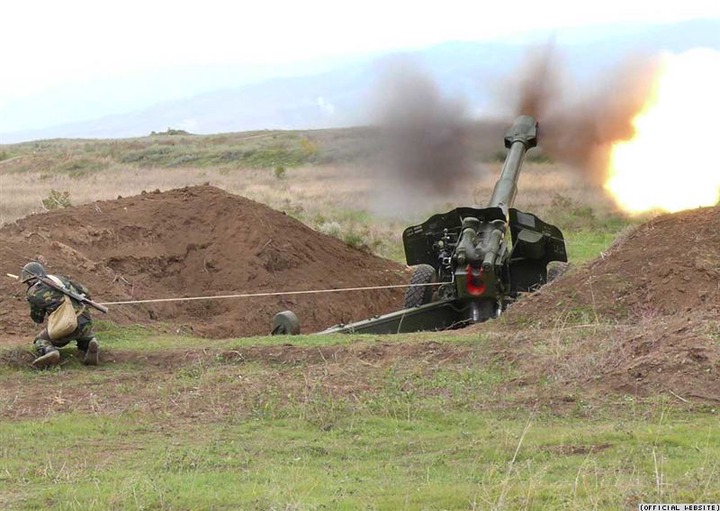 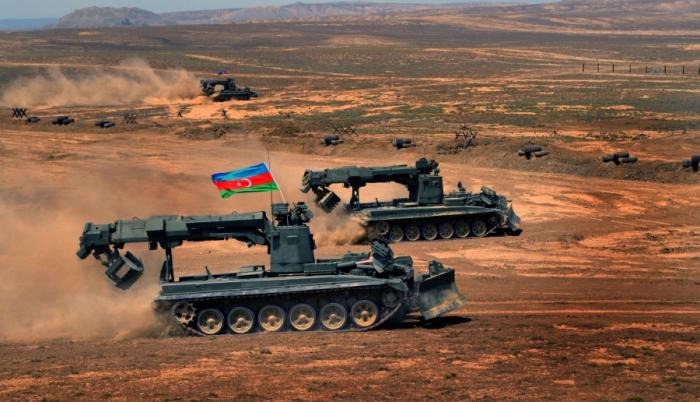 Up until December 2002, Armenia maintained a Ministry of Internal Affairs, but along with the Ministry of National Security, it was reorganised as a non-ministerial institution. The two organisations became the Police of Armenia and the National Security Service. In February 1999 the Deputy Minister of the Interior and Commander of the Internal Troops, Major General Artsrun Makarian, was found shot dead. In 2013 the International Institute for Strategic Studies attributed the force with four paramilitary battalions, 55 AIFV including 44 BMP-1 , and 24 wheeled armoured personnel carriers.

Although the Russians have supplied newer equipment to Armenia over the years, the numbers have never been sufficient to upgrade all ground force formations and many of the lower readiness units still have older, Soviet-legacy systems that have not been upgraded or in many cases effectively maintained. These older systems are placing great demands on the logistics system for service, maintenance, replacement parts and necessary upgrades, costing the army both financially and in overall readiness. The ground force is engaged in an effort of reassessment, reorganisation and restructuring, as the future of Armenia's defence needs a revised force structure and unit mix. 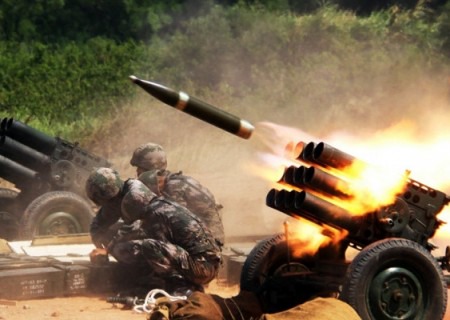 The army sees the need to maintain much of its traditional mechanised formations, but is looking to lighten and make more mobile and self-sustainable a small number of other formations. It must develop these newer formations to support its international requirements and effectively operate in mountainous and other rugged terrain, but it must do this without affecting the mechanised capability that is needed to confront Azerbaijan's conventional forces.

Since the fall of the Soviet Union , Armenia has followed a policy of developing its armed forces into a professional, well trained, and mobile military. In 2000, the Centre for International Studies and Research reported that at that time the Armenian Army had the strongest combat capability of the three South Caucasus countries' armies (the other two being Georgia and Azerbaijan ). CSTO Secretary, Nikolay Bordyuzha, came to a similar conclusion after collective military drills in 2007 when he stated that, "the Armenian Army is the most efficient one in the post-Soviet space" . This was echoed more recently by Igor Korotchenko, a member of the Public Council, Russian Ministry of Defense , in a March 2011 interview with Voice of Russia radio. 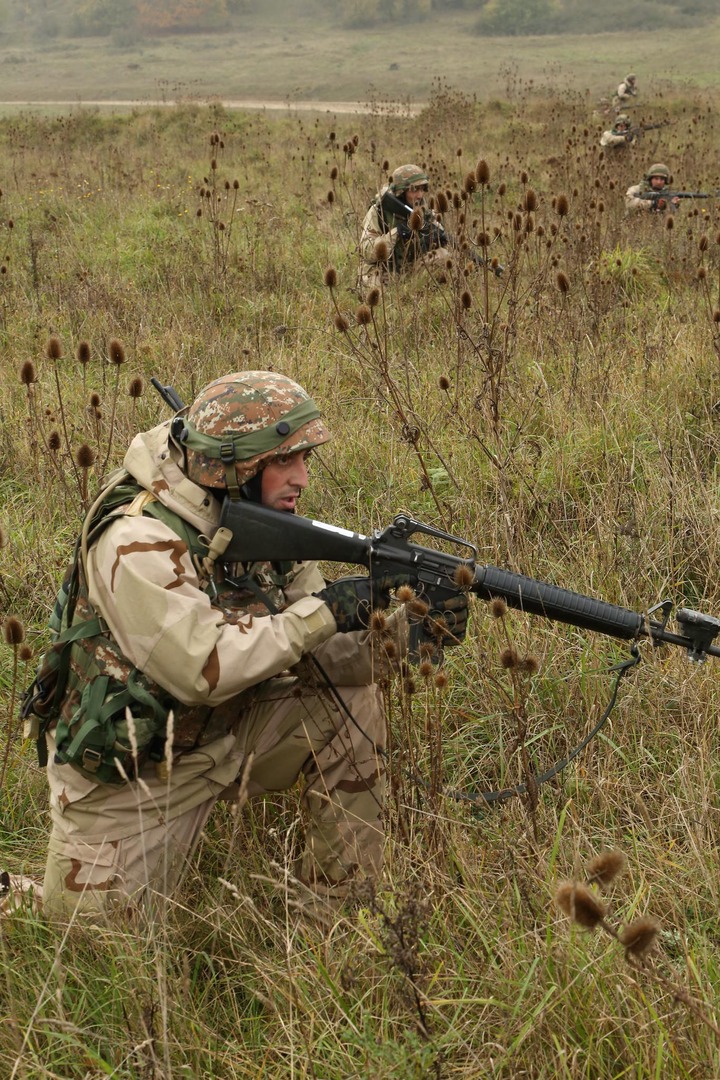 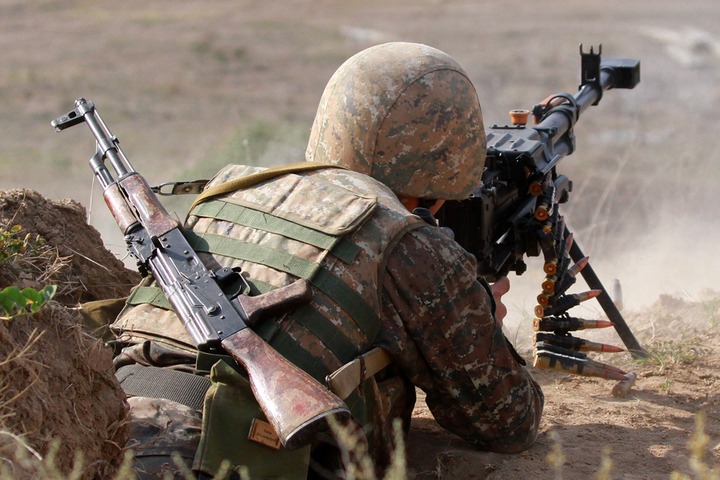 The Army is functionally divided into Active and Reserve Forces . Their main functions include deterrence, defense, peace support and crisis management , humanitarian and rescue missions, as well as social functions within Armenian society.

The Active Forces mainly have peacekeeping and defensive duties, and are further divided into Deployment Forces, Immediate Reaction, and Main Defense Forces. The Reserve Forces consists of Enhancement Forces, Territorial Defense Forces, and Training Grounds. They deal with planning and reservist preparation, armaments and equipment storage, training of formations for active forces rotation or increase in personnel. 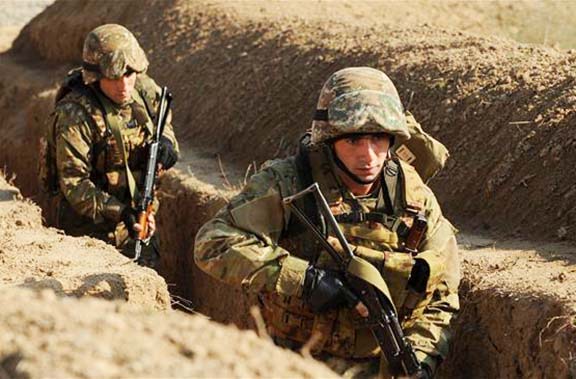 During peacetime the Army maintains permanent combat and mobilization readiness. They become part of multinational military formations in compliance with international treaties Armenia is a signatory to, participate in the preparation of the population, the national economy and the maintenance of wartime reserves and the infrastructure of the country for defense.

In times of crisis the Army's main tasks relate to participation in operations countering terrorist activities and defense of strategic facilities (such as nuclear power plants and major industrial facilities), assisting the security forces in proliferation of weapons of mass destruction, illegal armaments traffic and international terrorism. 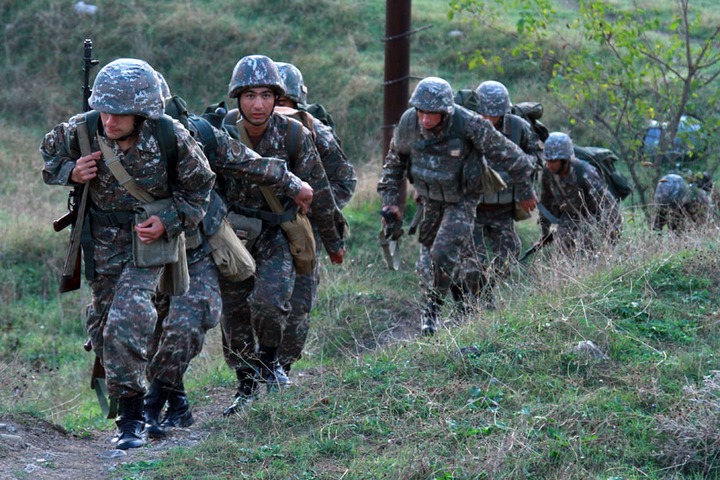 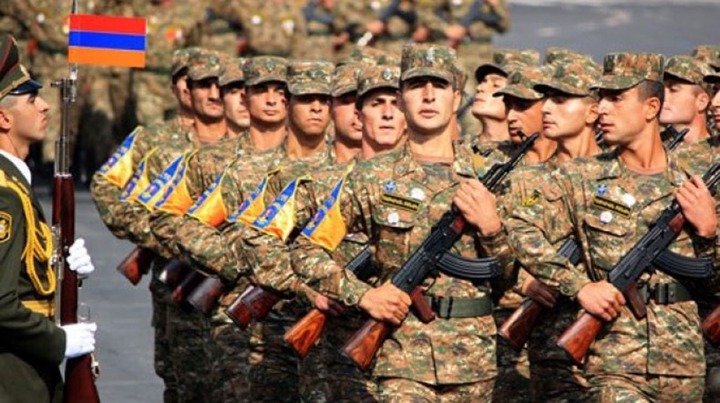 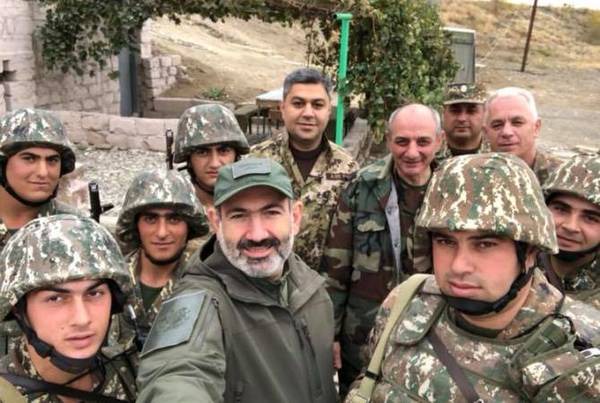 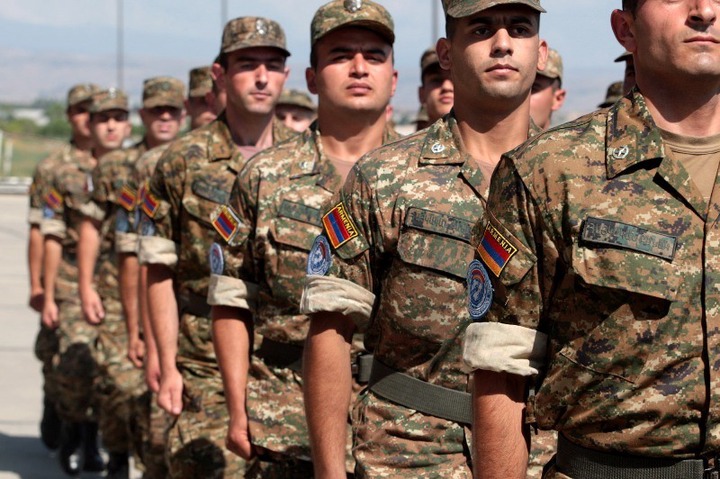 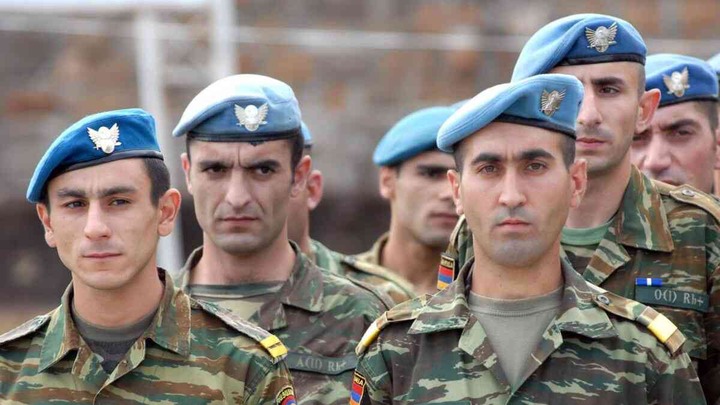 Experiments in developing small arms have been undertaken in Armenia, producing the K-3 assault rifle, but Jane's Infantry Weapons estimates that the program has ceased, and the rifle is not in widespread service with the army. The AK-74 is the standard issue rifle of the Armenian Army with older AKMs in reserve use. Beside AK rifles Armenian forces use mostly Russian small arms like the Makarov pistol , SVD sniper rifle, and the PKM General Purpose machine Gun.