By Quick (self media writer) | 2 years ago 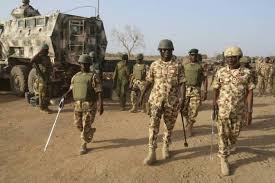 According to an official military statement, the troops were ambushed as they advanced to a notorious criminal gang camp deep in a forest near Jibia in Katsina State.

It says 17 bandits were killed and three soldiers were killed in Saturday's violence. As against on going rumours that over 17 soldiers died during the ambush.

However, there are reports that the army lost 16 troops - including several senior officers - and another 28 were injured.

In the last ten years, more than 8,000 people have lost their lives there. Military operations and the offer of an amnesty have failed to stop the violence.

Recently the Nigerian Defence HQ reported that it has gained massive momentum against terrorism as a top Commander of the Boko Haram was killed along with other members of the terrorist group.