The most intelligent criminal in history and why? 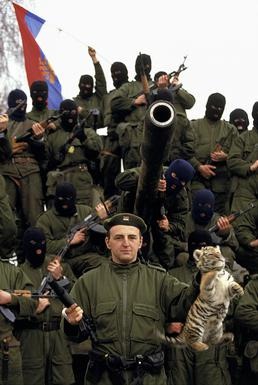 ﻿See that man holding the Tiger while posing among many masked Serbian Paramilitary/Militiamen? His name is Zelijko Raznatovic and, in my opinion, was a rather brilliant Criminal. I will delve into a little history on the guy before I get to my main point on why he is a “Brilliant Criminal”.

So basically this guy is born in Serbia in the early 50’s in Yugoslavia (or the Federal People’s Republic of Yugoslavia and this was when Tito was still ruling) and he basically gets into the Serbian Underground and works his way up. Upon “working his way up” from being just a regular Burglar/Thug his talent is recognized by Tito and Tito offers him to be his “Right Hand Hit Man” against anyone who dares to act against Yugoslavia either in The USSR or Western Europe. Upon Tito’s death this man uses his financial assets to create a Ice Cream Store and also a Football Team called “The Red Stars”. Upon the outbreak of the Yugoslav Conflict this man then begins hiring Police Commanders/Trainers and begins training these people into becoming “The Serb Volunteer Guard” or otherwise known as “Arkan’s Tigers” or even “Arkan’s Guard”. These men would, during the conflict, participate in “Ethnic Cleansing” Missions to rid Serb Controlled areas of either Bosniak Muslims or Croatians and they from time to time did Terrorist Attacks in areas such as Croatia and Bosnia.

The brilliance mainly comes from the fact that he basically climbed a proverbial “ladder” to where he was from whence he was. Going from a small time Thug to a big time War Criminal/Lord. And also what added to that was that, during the conflict, he managed to equip his units with the latest and greatest Military Hardware (though Bosniak Gangs and Croat Gangs also did the same. Hell the Bosniaks got support from none other than Hezbollah).

In conclusion sometimes climbing the ladder can be the mark of brilliance in The Criminal World.

Content created and supplied by: Contactpoint-247 (via Opera News )