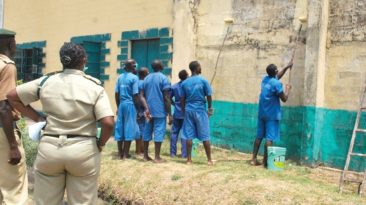 Ayodele Olawale, a former Nigerian soldier who ended up in Kirikiri prison tells his story.

During his time in the Nigerian army, Ayodele Olawale was one of the soldiers who fought Boko Haram Militants. He claims that he did not commit any crime but he ended up in KiriKiri, Nigeria’s maximum prison as a result of his job as a soldier.

He begins his story by pointing out where he served, in Maiduguri plateau state 2013. “We had a call to move to Maiduguri, in order to chase away those bad elements called Boko Haram,” he began.

He talked about an attack his troop was supposed to make in September 2013 where 38 members of his troop were lost. When they returned from the attack their Brigade commander paid them a visit and addressed them. Olawale asked the commander a question when he was done addressing them.

The commander in return said that the air force failed him. The surviving members of the troop did not believe the commander’s excuse and this caused outrage among the soldiers.

About a month after this incident he was called by his superiors to narrate the incident that happened that day.

Shortly after his battalion commander accused his troop of causing a violent stir in around civilians and they were detained in Maiduguri for about 8 months, they were moved to different locations until Femi Falana came and defended them.

While the soldiers awaited their death day to arrive, the court president said the judgement was subject to confirmation, a judicial system that takes place in the army. The conclusion of the confirmation was a 10 years’ imprisonment instead of a death sentence. Their lawyers carried on further to appeal the 10 years’ sentence.

On the 30th of May 2019, the court of appeal discharged Olawale and his colleagues. When he was told about the court ruling, he was very surprised and didn’t believe the news until he spoke to his lawyer.

He said he thanks God for his experience in Kirikiri because he learnt a lot, things that no university in the world can teach. He said first, you have to know how to manage your resources very well.

Secondly, you’ll understand how to worship and praise God. He says he’s neither angry with the country nor the army for failing them.

Sanwo Olu Surprises Artist, Taiye Oniyakuya, Who Made A Carricature Of Him