The heavy presence of security operatives in Anambra State has been declared commendable by some citizens of the Federal Republic while many citizens, surprisingly, condemned the decision to deploy 'Exercise Golden Calm' to the Southeast state, Anambra. 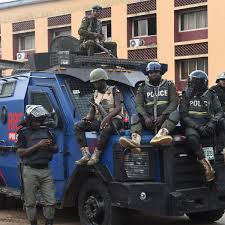 It could be recalled that Nigeria Military, in collaboration with other security operatives in the country, recently, launched 'Exercise Golden Calm' to manage the rise in the insecurity menaces that face the Anambra State and the neighboring states. The exercise was aimed at restoring peace and orderliness to Anambra State and her neighboring states within stipulated time.

First, the rise in the rate at which some unidentified criminals in the state commit arson is, certainly, regrettable and thus, require quick action of the State. 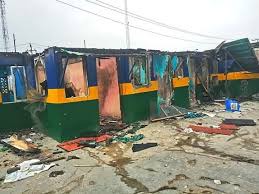 Unfortunately, some politicians, notable citizens and government have lost huge sum of money to incessant burning of properties by some hoodlums whose roots are yet to be traced. Houses that belong to some private citizens, police station, naval offices and other notable buildings have been burnt down by the hoodlums in Anambra State, over time.

Secondly, the rate at which some citizens of the Federal Republic of Nigeria are being killed by some hoodlums, who are being code-named 'unknown gunmen', in Anambra State is worrisome and, administratively, unacceptable. Hence, the heavy presence of security operatives in Anambra State.

Interestingly, there is no government that will keep watching citizens of her country being killed, incessantly, without taking reasonable action to curtail the cause of the killing. This alone could, reasonably, be enough for the Federal Government of Nigeria to deploy heavy security officers to Anambra State for the assurance of security of lives of the citizens in the state.

Thirdly, the vow by some unknown gunmen that the next governorship elections in Anambra State will not hold could be considered as an action against the state. It is, therefore, a dreadful offense which cannot be taken with soft hand by the government.

According to a report by the Vanguard, some citizens of the State have, recently, protested that the next governorship election will not hold, in the state. 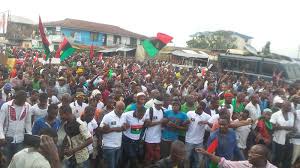 Photo: No Election Protest in Anambra, culled from the Premium Times

Considering the fact that the November 6 governorship elections in Anambra State is few weeks away, the Federal Government of Nigeria must have, find it deem fit, to deploy heavy presence of security operatives in Anambra State with the aim of ensuring smooth conduct of the electioneering campaigns and the governorship poll.