Tukur Mamu, a member of the negotiation team, claims that five other victims were freed.

By Muholanur (self media writer) | 10 days ago 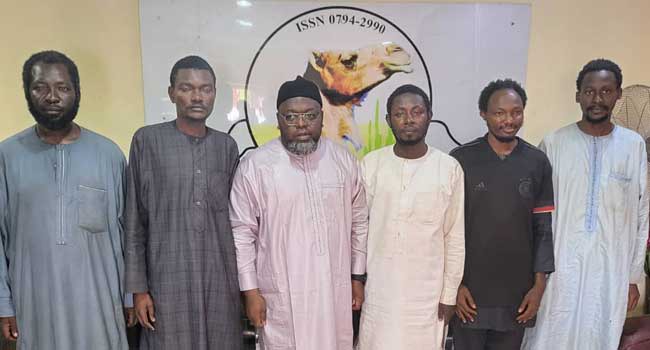 The Federal Government and security authorities have not officially confirmed the news, but Tukur Mamu, a member of the negotiation team, informed Channels Television that the victims were freed on Tuesday. Professor Mustapha Umar Imam, a physician at the Usman Dan Fodio University Teaching Hospital in Sokoto, identified the five freed inmates as Sidi Aminu Sharif, Abubakar Ahmed Rufai, and Akibu Lawal.

The release on Tuesday comes a few days after the militants released three other passengers from the kidnapped train headed for Kaduna. Around 11 a.m. on July 25, the victims—two men and a woman—gained their release, providing comfort to their individual families. They were reportedly freed by the jihadists at a place within the woodland near the Kaduna-Abuja highway, according to information obtained by Channels Television. Their family members then picked them up from that location.

As the Nigeria Railway Corporation briefly suspended operations out of concern for the situation, President Muhammadu Buhari ordered security agencies to save the victims. Only last week did the terrorists release a viral video of themselves beating hostages. They also threatened to abduct President Buhari and Kaduna State Governor Nasir El-Rufai. A few hours later, in response to the threat, the administration accused the rebels of using propaganda to pressure the government into giving in to their demands.

Content created and supplied by: Muholanur (via Opera News )