By Solosport (self media writer) | 8 months ago 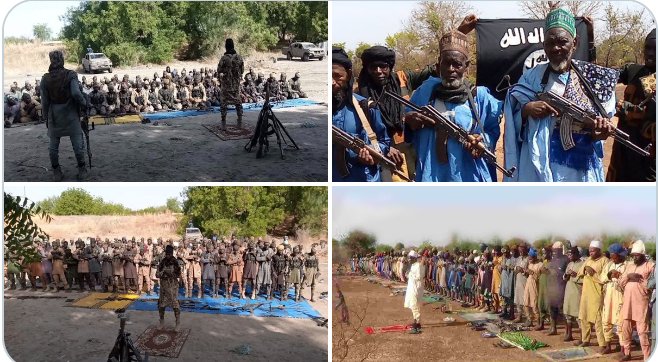 While the date of the event is unknown, Eid-el-Fitr was celebrated by most Muslim faithful across the globe on May 13.

According to the pictures sighted by SaharaReporters, the insurgents were seen in about four groups praying together in open fields.

The Nigerian military has repeatedly claimed that the insurgency had been largely defeated and frequently underplays any losses.

In the past months, the insurgents have targeted soldiers who lay ambush on their path.

Where please? Inside Maiduguri or in a hidden place? Who is sending these pictures to you

U are asking about the pictures was taken but u mumu never ask where one of family see Money, palliatives give to ur families by Bokoharam

this Sahara guys seems to have some intelligence that will be useful in getting Boko Haram...why not engage with Sahara ?

You should say: I wonder what kind of people does that. Why do you always find a way to tag things to a religion. Bad people are everywhere in all religion, they kidnap rapw and kill. No religion support that as such dont bring religion

This embarrassing and alarming, a general is president and terrorists have taken over!

But I have an issue, I read this and I didn't see any location/state and every news item should have the Ws and H.

Where did this happen?

Who is taking this pictures and send them to media houses; and our so-called intelligence squads are unable to locate them

So ppl r (...help complete) like say twitter followers r criteria to heaven. Tweeting nonsense on both serious and unserious ish. Go work on urself. If u hv value and relevant, u wont beg ppl to follow u like say na ur pass thru heaven's gate.

Now they don’t even cover their faces. It wasn’t like this 7 years ago. By 10yrs time, if the Southern leaders don’t help us break away from these people, Nigeria will become another Syria Flag of Syria This is not a prophecy. It is how it works.

Did I hear you say 10years, they're here already, our leaders are collecting a paltry sum of money and selling their pple, we will hold them accountable

Beggars belief that the Nigerian military cannot deploy or sustain ISR capabilities over a limited area to pinpoint these locations. BH is posing with weapons and vehicles graciously provided by the Nigerian army

In 2018 General TY Danjuma said that Nigerian Armed Forces are NOT neutral & they aid, shield the Terrorists.

The fact that Terrorists/ Boko Haram in Nigeria enjoy this level of comfort shows that attack on Boko Haram is attack on North as Buhari said.

So nah this few criminals dey trouble a whole Nigera and our army couldn't wipe them out of circulation. I want to believe this an organized and political sponsor group some are just using to cash out on the masses. Even the Israel army will finish these guys in one day