Brooks Lindsey didn’t get much of a chance to meet women given of the nature of his job. But during a leave when he met a girl named Haley who also lived in his hometown of Brandon, Mississippi, the two instantly became smitten with each other.

He was a soldier in the 114th Field Artillery Regiment, 2nd Battalion of the Mississippi National Guard. He was on base much of the year, and when he did leave, he spent most of his time with family. Until he met Haley.

It wasn’t long before Brooks popped the question and was met with a resounding “Yes!” from his now-fiance. In November of 2020, friends and family gathered to watch the two exchange vows and pledge their love to each other.

Soon, the ultimate familial decision occurred: The couple was going to have a baby and become a true family unit. It wasn’t long ago Brooks doubted he’d ever find true love, and now he was on his way to fatherhood.

The couple was lucky to have super supportive parents on both sides who swore they’d do everything they could to help once the baby arrived. For the first time in his life, the tough soldier showed a soft side.

As happy as the couple was during the course of the pregnancy, they both knew Brooks could get called back to duty at any moment. Unfortunately, not long before Haley was due, Brooks received word it was time for him to leave.

Brooks had to return to Fort Bliss in El Paso, Texas. If Haley went into labor, the plan was to call the Red Cross, who would then contact Brooks and get him home in time. Well, the day came quicker than they both thought.

Brooks was in a panic when he got the call. Everything was okay, but he wanted to be with his wife badly; he knew she was nervous. So, off to the Dallas-Fort Worth International Airport he went. 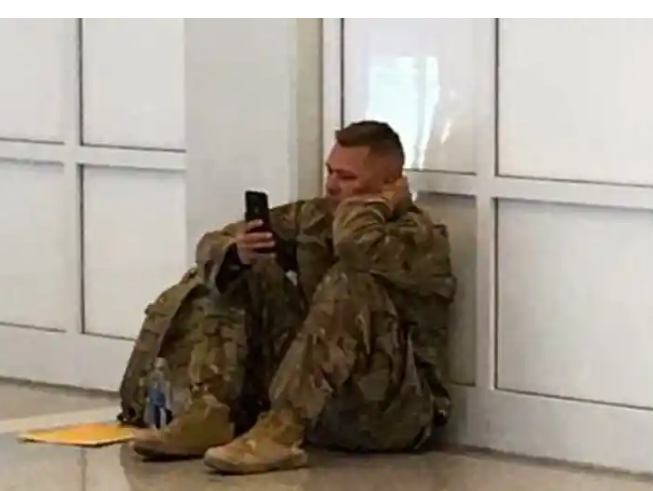 Brooks got to the airport and started running towards Terminal B where his plane was waiting. He was weaving in and out of people, and his nerves were full-blast. When he checked the board for the flight info, however, his heart dropped.

Every plane taking off from the airport was delayed at least two hours. This couldn’t be happening to him. There was no way he could miss the birth of his first child. He wandered off to a wall and collapsed on the floor, distraught.

He was in a daydream-like state. It felt like the world was against him. His wife was all alone in a hospital bed going through labor pains, and he was nowhere to be found. Just then, his phone rang.

The ring snapped him out of his daze, and he stared down at an incoming cal from his mom. She was attempting to Facetime him. This was weird. Why was mom Facetiming him? He picked up the call and immediately gasped.

There, on the small screen in the palm of his hand, was Haley, and she wasn’t alone. In her arms was the child she just gave birth to, a beautiful baby girl! Brooks sat and cried tears of joy in the airport!

It wasn’t easy for Teresa to convince the doctors to allow the call to happen, but under the circumstances, they let the camera in the room. As soon as Brooks heard the announcement to board his flight, he prepared himself to meet his new daughter.

When Brooks finally arrived at the hospital where Haley was caring for their newborn, he sprinted down the hall and came to a screeching stop in front of the room. There were both his angels, looking beautifully at peace.

The proud father scooped up his newborn, who they named Millie Fritz Anne, into his arms, closed his eyes, and held her gently for five whole minutes in silence. Haley knew this was the happiest moment of his life

Millie Fritz Anne was everything the couple hoped for. She was adorable and wore a huge smile on her face. She was part Brooks, part Haley, and all perfect. The family was now complete in the best way possible.

According to Haley, the fact the plane was delayed was actually a blessing in disguise. “Honestly it was a blessing that he was delayed because he would’ve been in the air, and he wouldn’t have known anything at all.”

The Lindsey family is happy and healthy, and funny enough, a person at the airport snapped a photo of Brooks while he took the incredible phone call, and it went viral on social media.