By Infowellness (self media writer) | 5 months ago

After a violent confrontation with troops from the Multinational Joint Task Force (MNJTF) Sector 4, Diffa in the Niger Republic, a total of 43 Boko Haram/ISWAP insurgents' bodies were removed.

Colonel Muhammad Dole, Chief of Military Public Information, HQ MNJTF Ndjamena Chad, stated in a statement on Wednesday that the troops demonstrated extraordinary bravery and valor when their area was assaulted.

In the early hours of Wednesday, August 25, 2021, sector troops stationed in Baroua were heavily attacked by suspected BHT/ISWAP criminals.

“The military strategically channeled the criminals to their effective killing zone, opened fire on them, and neutralized scores of terrorists, while others fled with varying degrees of injury.

According to the statement, “one terrorist suspected of being their leader was apprehended alive, a big cache of weaponry and ammo was found, and four enemy gun vehicles were destroyed.”

Seven heroic MNJTF members gave the ultimate sacrifice, according to the statement, while four other soldiers sustained varied degrees of injury and are being treated in a military hospital.

“On the 25th of August 2021, Major General Abdul Khalifah Ibrahim, the Force Commander (FC), MNJTF, was in HQ Sector 4 Diffa on the final leg of his familiarization/operational visit to the sectors. 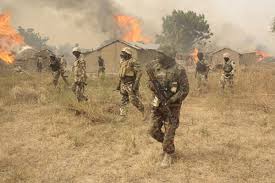 “General Ibrahim praised the troops for their selfless sacrifice and gallantry,” according to the statement.

The Force Commander expressed his condolences to the families of the slain soldiers and wished the wounded soldiers a swift recovery while praying for the repose of their souls, which he described as "martyrs of freedom."

These attacks, he said, were like the fruitless kicks of a dying horse.

He also told them to prepare themselves, stay watchful, and deal firmly with any remaining criminals on the outskirts of the Lake Chad region.

Content created and supplied by: Infowellness (via Opera News )