Does the United States have the courage and power to launch airstrikes in China?

China would never allow a “Dessert Storm” without counter striking the US and since China doesn’t have the “conventional forces” it would have to be a nuclear response. I ask you is America ignorant and arrogant enough to launch airstrikes in China? 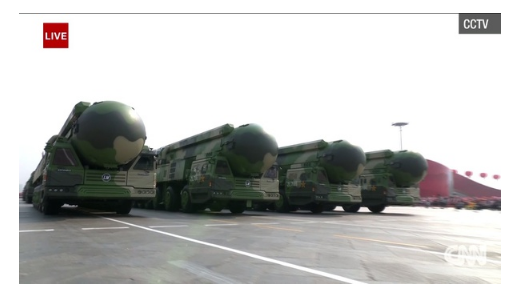 One highlight of the parade is the first public appearance of the the DF-41 intercontinental ballistic missile, says military analyst Tong Zhao. Much of the parade hype has focused on this powerful intercontinental-range ballistic missile, thought to be the mainstay of the People's Liberation Army Rocket Forces (PLARF) arsenal for years to come -- and, by some estimations, the most powerful missile on the planet. Under development since 1997, the DF-41 was rumored to appear in parades in 2015 and 2017, but instead was kept under wraps. It is carried by a transporter erector launcher (TEL) so that makes this missile highly mobile and increases its survivability and operational flexibility. "It is believed to have a big payload capacity which means it can deliver very heavy payload to very long distances. So most likely this missile will be armed with more than 1 warhead, but we don’t know how many it can accommodate. Some say it can accommodate as much as 10, but we don’t know. That would make it very powerful," says Tong.

The Missile Defense Project at the Center for Strategic and International Studies says the DF-41 will have a range of up to 9,320 miles (15,000 kilometers), more than any missile on Earth, and will be capable of carrying 10 independently targeted nuclear warheads. From launch in China, it could theoretically hit the continental United States in 30 minutes, the Missile Defense Project says. 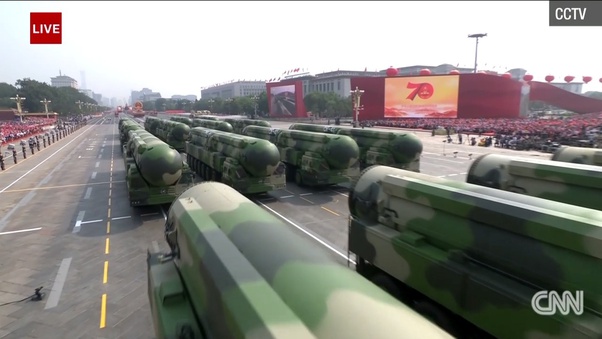 Mobile-launched DF-41s can be carried by trucks and trains. Satellite photos taken earlier this year showed DF-41 mobile launchers in the PLARF Jilintal training area in Inner Mongolia, according to the Federation of American Scientists (FAS), which monitors world nuclear arms developments. Those satellite photos also show what "strongly resembles" a silo, according to Hans Kristensen, director of the Nuclear Information Project at the FAS, who analyzed the images. Kristensen wrote the possible missile silos appeared to bear more of a resemblance to Russian ICBM versions than existing silos for older, liquid-fueled Chinese ICBMs. The DF-41 is solid-fueled, like the Russian missiles. Solid-fueled missiles are easier to deploy and quicker to launch than liquid versions. The backbone of the United States nuclear arsenal, the Minuteman III missile, is a solid-fueled, silo-based weapon. However, it carries only one warhead, as its original three-warhead design was limited by nuclear treaties with Russia.

China may be ready to deploy the DF-41 in numbers. At least 18 of them appeared to be at the Inner Mongolia training ground in satellite photos earlier this year. Though capable of carrying 10 warheads, it is likely only three would be on each missile, with the rest being dummy or decoy warheads, according to the Bulletin of the Atomic Scientists (BAS). Part of that has to do with warhead availability. China's nuclear warhead inventory is estimated at 290 for use on ballistic missiles and bomber aircraft, the Bulletin said in its 2019 report on Beijing's nuclear forces.