As Biden races against time to evacuate Afghans, the Talibans restrict Afghans from moving out

The Taliban has warned the United States to stick to next week's deadline to evacuate Afghans. 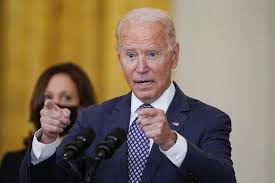 On Tuesday, they said they won't be allowing the evacuation of Afghans anymore. The United State President, Joe Biden aims to stick with August 31 deadline to withdraw troops from the warring country as long as the evacuation isn't interrupted by the Talibans. Top American officials are calling for an extension of the deadline in order to evacuate more people.

Spokesman of the Taliban, Zabiullah Mujahid told the huge crowd of Aghans who have gathered at the airport to return home and assured them they will not face reprisals from the country's new rulers.

He also said the road to the airport has been blocked which prevented the Afghans from taking that route but allowed foreign nationals to access the road.

The spokesman also said, doctors and academics of Afghanistan should not leave the country for Western countries but should work in their specialization in the country. He also reassured that the foreign embassies and aid agencies would remain open.

During a G7 meeting on Tuesday, the United Kingdom prime minister Boris Johnson called on the Taliban to guarantee safe passage for those wishing to leave the country through August 31 and beyond. Describing it as the council's "Number one condition" .