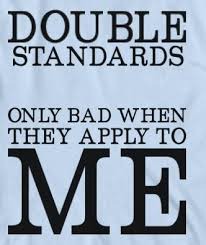 They say we are mad because we call the name of Allah too loud.They say, we have invented something New in Islam because we gather in the Mosque and mention Allah a lot, make

We also ask them,who invented the congregational salat( Tahajjud) that they do at the mosque in the last ten days of Ramadan around 12am-4am because what Rasul Allah did and later on revived by sayyiduna Umar was NOT TAHAJJUD But rather

If gathering together and calling the name of Allah qualifies one to be a Mad person, then we have accepted this madness

Double Standards- Following dual policy to be perfect for everyone

Irony- Being what exactly opposite of what suggesting others

The three terms are interlinked by the fact that they point to a common trait, Lie, False,Untrue.

However, difference do exist between them.Examples include:

Hypocrisy- Politics. The same person promising people safety,security and growth for sake of getting votes would be the same person who would kill people, spread terror in constituencies and never care about funds and facilities reaching the common masses.

Double Standard- Our society. People who can't afford even a decent standard of living, become extremely conscious about their honour, hence commit honour-killing.

Irony- Again our society. People visiting other's functions will always crib about lack of proper arrangements, bad food etc, even though the arrangements are decent and they are not paying a single penny for it.But the same people, when hosting a function themselves, curse guests for pointing their mistakes and not appreciating the efforts.

Overall, there are innumerable examples to demonstrate these traits. Although by implementing either of these, one can fool oneself for a short time. But ultimately, it will be visible that it was waste to imbibe these traits within themselves.

3 Things to consider when choosing a corporate style to wear