By Olaiyamedianlink (self media writer) | 3 years ago

A major incident has been declared in South Wales as record-breaking Storm Dennis sweeps the country.

Flood warnings have now reached an all-time record, with a staggering 594 in place across England.

Evacuations have taken place across the country as flooding hit homes. Rare, severe red warnings are in place in Worcester, Scotland and Wales, and the Met Office has issued amber alerts - meaning people must be prepared to change plans and protect themselves and their family from the storm - for parts of Yorkshire, Wales, Devon, East Sussex and Kent.

The military was deployed yesterday to build flood defences in West Yorkshire in areas where people are still struggling to repair their homes after the floods caused by Storm Ciara.

The US National Weather Service's Ocean Prediction Centre reported winds of up to 92mph yesterday and waves are predicted to reach more than 100ft (30m) high across the North Atlantic.

It was estimated that more than 40,000 travellers were affected by the disruption on air, rail and road networks and more than 700 homes in westerly Cornwall were left without power yesterday afternoon.

Two people were killed yesterday in turbulent seas off the south coast of England.

Two people killed on Saturday as Storm Dennis moves in

Army called in as West Yorkshire prepares for deluge

Hundreds of homes at risk from Storm Dennis

Official "immediate risk to life" warnings are now in places in Worcestershire, Shropshire and Herefordshire.

A yellow warning for rain is also in place across areas such as Warwickshire, Leicestershire and Nottinghamshire.

Major roads such as the M54 and M42 have been disrupted, with residential streets in Loughborough, Leics., and Lowdham, Notts, among those completely flooded.

Worcester has also been badly hit, with the home of Worcestershire County Cricket Club, New Road, under water. 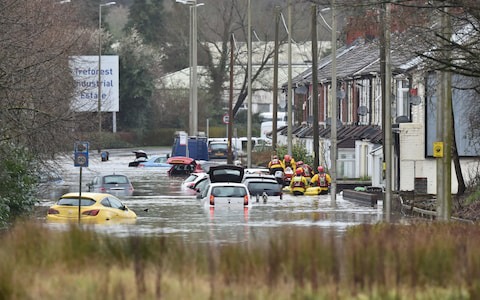 Content created and supplied by: Olaiyamedianlink (via Opera News )