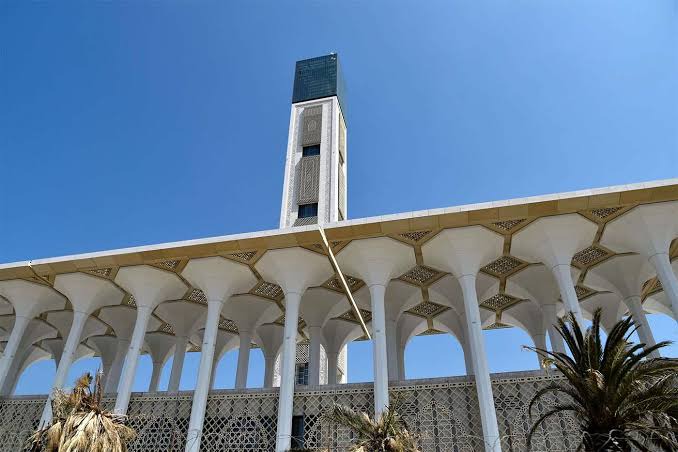 The construction of the mosque began in August 2012 after the Algerian government's contract, for 1 billion euros, was won by the China State construction engineering Corporation. The design was done by German architects KSP Juergen Engel Architekten and engineers Krebs und Kiefer International. The mosque faced construction delays owing to budgetary concerns due to the falling prices of oil. Around 2,300 workers from China, Algeria and other African countries were deployed to work on the project. The construction of the mosque was seen by many to serve as a symbol of the reign of long-serving president Abdelaziz Bouteflika

The mosque sits on a site covering 400,000 m2 (4,300,000 sq ft) and overlooking the Mediterranean Sea. The prayer hall has a capacity of 37,000 worshippers, while the structure including the compound can house up to 120,000 worshippers and has parking space for 7,000 cars. The complex also houses a Koranic school, a park, a library, staff housing area, a fire station, a museum of Islamic art, and a research centre on the history of Algeria.

The mosque also has a 265 m (869 ft) tall minaret, which makes it the tallest building in Africa. It also houses an observation deck atop the minaret, which has 37 floors. The mosque is designed to withstand an earthquake of magnitude 9.0 and the structure has been specially processed to resist corrosion. The main prayer hall has 618 octagonal columns serving as support pillars and 6 km (3.7 mi) of calligraphic writing engraved with a laser system. The dome of the prayer hall has a diameter of 50 m (160 ft) and rises to a height of 70 m (230 ft).