Piranhas: the beast of the Sea

A piranha is a member of family Serrasalmidae, or a member of the subfamily Serrasalminae within the tetra family, Characidae,Characiformes is a freshwater fish that inhabits South American rivers, floodplains , lakes and reservoirs. Although often described as extremely predatory and mainly feeding on fish, their dietary habits vary extensively, and they will also take plant material, leading to their classification as omnivorous . The total number of piranha species is unknown and new species continue to be described. Estimates range from 30 to more than 60 species

Piranhas have one of the strongest bites found in bony fishes. Relative to body mass, the black piranha produces one of the most forceful bites measured in vertebrates. This extremely powerful and dangerous bite is generated by large jaw muscles (adductor mandibulae) that are attached closely to the tip of the jaw, conferring the piranha with a mechanical advantage that favors force production over bite speed. Strong jaws combined make them adept at tearing flesh. 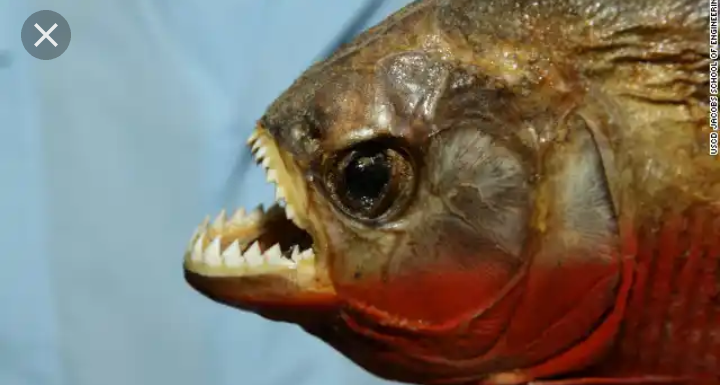 They mostly attack in groups and so can be deadly when in large numbers, they detect splashes and move enmass towards the spot and whenever they are hungry they take on anything stripping fishes to their bones in a short time.Piranhas post no threat to human being but can be responsible for some fatal injuries especially children at rivers, they mostly attack with bites to the legs and arms

They are rear incidences where piranhas attack humans to death, when former American president Theodore Roosevelt visited Brazil in 1913, a group of fishermen pushed a cow into a part of River Amazon where a school of starved piranhas dwelt, the fishes quickly tore the cow to pieces. When starved or angry, piranhas can be the most dangerous school at Sea