Roy Cleveland Sullivan born on the 7th of February, 1912 was a United States park ranger in Shenandoah National Park in Virginia. He was known as the "Human Lightning Conductor" and "Human Lightning Rod" due to him surviving on seven different occasions, hits by lightning. He is recognised by Guinness World Records as the person struck by lightning more recorded times than any other human being.

The odds of a person being struck by lightning for a period of 80 years have been estimated at 1:10000. If the lightning strikes were independent events, the probability of being hit seven unrelated times would be (1:10000)7 = 1:1028. However, these numbers do not apply to Sullivan because he was prone to more storms by the nature of his work. An average of 35 to 45 thunderstorm days per year is being experienced in Virginia, where he lived. 58 people were killed, with at least 238 people injured in Virginia where he lived. Likewise, 3239 people were killed with 13,057 were injured by lightning in the same period.

He was avoided regularly by people for the fear of them being struck by lightning and he was greatly saddened by this.

Sullivan died at the age of 71 on the 28th of September, 1983 from a suicide attack he had inflicted on – from a gunshot shot to his own head. In his honour, two of his ranger hats are being displayed at two Guinness World Exhibit Halls in South Carolina and New York City. 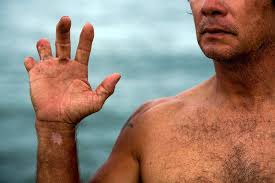