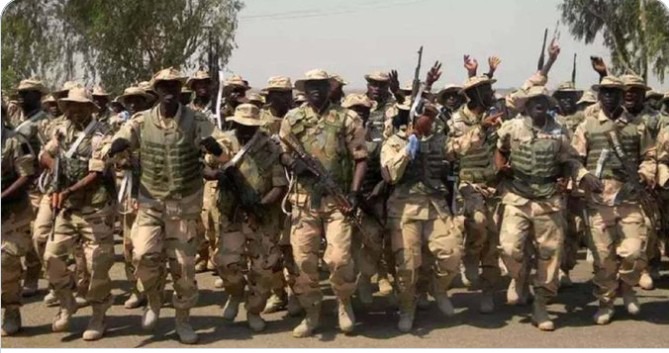 The troops of Operation Lafiya Dole have eliminated the top command and members of the Boko Haram/Islamic State of West Africa Province (ISWAP) terrorists in the recent fighting in the northeast, according to the defense headquarters.

Major General John Enenche, coordinator of the Defence Media Operations , announced this in a statement in Abuja on Sunday.

Enenche said that on July 17, troops killed six terrorists in Kolofata, a community on the border with the Republic of Cameroon, as they attempted to cross in the direction of the Sambisa forest axis.

Among the weapons and equipment recovered from the terrorists were three AK47 rifles, a magazine with 48 rounds of 7.62 mm ammunition, a Honda car, a motorcycle and eight bicycles, Enenche said.

Among the other items recovered were three mobile phones with various SIM and memory cards, as well as five copies of the Holy Qu'ran.

Enenche added that the troops also intercepted a letter written in the Hausa language addressed to Abu Fatima, one of Boko Haram's top commanders, as well as documents and other logistical records.

"Shortly after the success of the operation, the interception of enemy communications confirmed the death of a top Boko Haram commander named Sayinna and other combatants during the encounter.

"The other suspected terrorists killed are the Imam and Masur of Abu Fatima, who are hibernating in the Sambisa forest," he said.

According to him, the troops continued their attack on the terrorists in the northeast, killing eight prominent sect leaders in their futile attempt to infiltrate the Army Super Camp, Damasak.

Enenche noted that thanks to the persistence of the troops, their superior firepower and their maneuverability, the terrorists were devastated and the rest escaped in complete confusion.

In his opinion, the military's successes since the 2020 changeover have caused confusion and disharmony in the insurgents' camps.

"This can be seen in the frequent changes in ISWAP's leadership in a short period of time, and this is largely due to the many losses inflicted by its own troops, both in terms of men and in terms of weapons and equipment," he said.

Enenche said the main terrorists from Boko Haram and the leaders of the ISMAP were killed during the Damascus meeting and buried by the terrorists in the early morning of July 3rd in the village of Goski.

Enenche stressed that a series of successes recorded so far have led several of the insurgents to capitulate in number.

The spokesman said the military high command had praised the security agencies operating in the Northeast for their continued successful operations.

"They continue to be urged to stand firm and maintain the momentum of attacks against our country's enemies," he said.