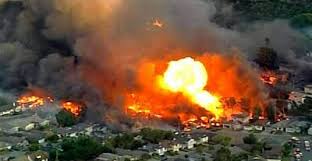 Amid ongoing insecurity across the country, another bomb explosion has led to the death of at least six people in Katsina state after some farmers mistakenly dug up the bomb while farming. The explosion was suspected to be from an improvised explosive device (IED).

The incident was reported to have taken place in Yardagi village, Zango local government area of Katsina State.

The bomb blast reportedly occurred today Saturday July 18, claiming the lives of about 6 people with at least five unconscious at Malumfashi General Hospital as a result of the blast.

Recall that Dr Umar Farouk Umar, the Emir of Katsina had earlier explained the state of Nigeria insecurity as being worse than the civil war. He made this comment during the visit of Lt General Tukur Buratai to his palace.

However, the President Buhari led administration would have to ensure that they tackle the rising cases of insecurity across the country, ensuring that the safety of lives and properties of the people are guaranteed.

People now live their lives in fear of the unknown, not knowing when they will be involved in another Ill fate.

However, if the government could put in place strict measures towards ensuring the safety of the people, the society would be a better place to live in