What do you know about the Nine eleven ?

The September 11 attack often refered to as the 9/11 were a series of four coordinated attack by the Islamic terrorist group know as Ai- Qaeda against the United States on of Tuesday September 11 2001.

The attack resulted in 2,977 fatalities,over 25,000 injuries, and substantial long term health consequences, in addition to at least $10 billion in infrastructure and property damage. 9/11 is the single deadliest terrorist attack in human history and the single deadliest incident for firefighters and law enforcement officers in the history of the United States with 343 and 72 killed respectively. 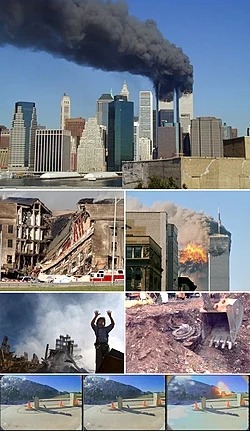 Their locations were Manhattan (New York,USA), Arlington country (Virginia,USA), Stonycreek Township nearShanksville(Pennsylvania, USA). Their main target were the World trade center, the Pentagon and the USA capital but that one failed.

These terrorist were just a number of nineteen people