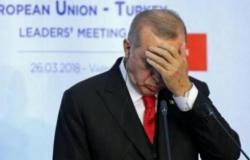 Turkish press reports said that the approval of the Egyptian parliament to send elements of the armed forces on combat missions abroad caused an earthquake within the ruling regime in Turkey, pointing out that Erdogan held a meeting with Turkish sovereigns to study the impact of Egypt's decision on the military scene in Libya.

The head of the Turkish Future Party, Ahmet Davutoglu, has said that what Turkey is doing in Libya is not in its interest at all, criticizing Turkish President Recep Tayyip Erdogan.

Ihsanoglu called in statements highlighted by the 360-degree program of the Turkish newspaper Cumhuriyet Erdogan to the need to sit with Egypt and negotiate the situation in Libya, and that a confrontation between Egypt and Turkey in Libya would not be in Turkey's interest.

These statements come amid continued Turkish aggressive moves in Libya by sending Ankara to its terrorist militia to support the government of the so-called Libyan National Accord.

The Egyptian House of Representatives announced its approval of sending elements of the Egyptian armed forces on combat missions outside the borders, news sites and newspapers in Turkey today, Monday.

The Turkish newspaper "Europe From" said that the Egyptian parliament unanimously agreed to send elements of the armed forces out of the country; In order to protect national security, this is in line with the strategic western trend against the presence of armed criminal groups and foreign terrorists in Libya.

Important Notice: The site is not responsible for the authenticity and reliability of the news, it is published from other press sources, and therefore does not bear any legal or moral responsibility, but rather the main source of the news. The site only transmits what is circulated in the Egyptian and international media circles to provide an integrated news service.