Zamfara: Government to give 2 Cows per 1 rifle to Bandits

By gidigo.com (self media writer) | 2 years ago 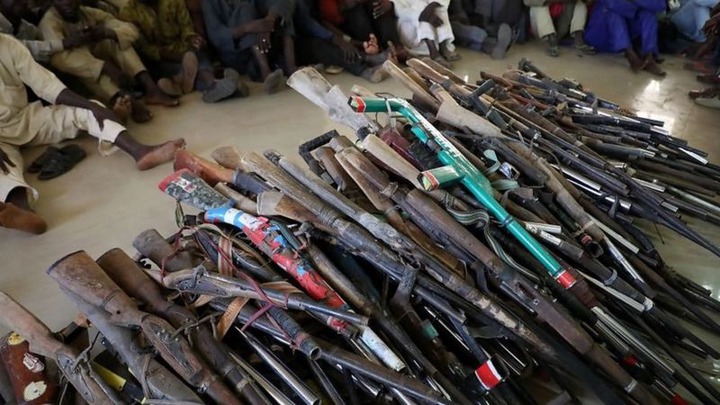 The Zamfara state government has said it will give the bush thieves two cows per rifle, in a bid to end the security crisis in the state.

State Governor Bello Matawale unveiled the plan while receiving Chief Inspector General of Police Mohammed Adamu and DSS Chairman Yusuf Bichi who were sent to the state due to security concerns.

But the government continues to attract people inside and outside Nigeria, while experts say caution is needed.

Zamfara State Commissioner for Defense Abubakar confirmed to the BBC that the governor had taken the initiative to reduce the proliferation of weapons in the hands of the people.

According to the governor, they will give the thieves two pairs as the Fulani need them most on cash.

Sound Effects of cooperation between Boko Haram and forest thieves

Boko Haram: What will happen if Zamfara militants respond to the group's invitation?

'What kind of two cows would match the price of an AK-47?'

Ever since the governor announced the move, the people of Zamfara State, as well as abroad, have been voicing their support for the move.

On our BBC Hausa Facebook page a man named Mubarak A. Suleiman asked to know what the authorities would do to the victims of the forest thieves.

"Ordinary people whose relatives and parents have been killed and what will you give them? And what about those who have been evicted from their cattle and burnt property?"

He also sought to know what the Zamfara government had provided for them, and said mediation with the forest thieves was not the key to peace.

Safiyyat Abdulhamid from Kumasi Ghana asked the state authorities, "Can they not be defeated? Or is the government not well equipped?" YES

Aminu Yaro Na-abba, on the other hand, looks at the issue from the perspective of the arms and cattle exchange.

Aliyu, the Emir of Gidan Aliyu, criticized the move as a whole: "Obviously this is not a solution to the government's reluctance to give anything to terrorists. But they are not allowed to continue to commit terrorism. "

He said the government has the power to look after any terrorist in the country as long as they stand between them and God.

But some see Governor Matawalle's move as commendable, because that is what he can do.

Expressing his opinion on the case of Suleiman Sani Aliyu Maisango that he did not feel guilty. "He has no control over the security forces as the governor. Buhari only has them ... so he has to find whatever way he can to bring relief to his state."

Content created and supplied by: gidigo.com (via Opera News )