By TopHub (self media writer) | 1 year ago

It was great achievement to see our gallant Nigerian Police Force and Nigerian Army always won against Boko Haram, Iswap Or Al-qaeda Troops.

This is tribute post on our Nigerian Forces Achievements in BORNO STATE, please consider leaving your comments.

The war against ISIS and Al-Qaida affiliates, Boko Haram and the Islamic State of West Africa Province (ISWAP) insurgency in the North-East Nigeria, particularly Borno State rages on after more than a decade.

There are several undocumented cases of selfless bravery from individuals putting their lives on the line to make sure the terrorists don't win.

Across different security outfits that are deployed to keep the enemies of the State subdued, an Officer and Commander of the Special Anti -Robbery Squad, Borno Command stands out – Chief Supretendent of Police(CSP), Mohammed Ibrahim.

CSP Mohammed Ibrahim was deployed to take the mantle of Leadership at the Special Anti-Robbery Squad (SARS) Command in Maiduguri (the Capital of Borno State ) in 2011. Since his deployment, the proactive and effective strategy and tactical operation of the dogged officer and his men have significantly impacted the fight against armed robbery kidnapping, and terrorism (Crime-terror nexus) in Maiduguri – the original enclave of Boko Haram violent activities.

Confidence in the SARS positive engagement has risen within residents of the city of Maiduguri and indeed other local government areas (LGA )of the state that were hot spots of the insurgency.

The officer continues to engage in live saving operations which provides complimentary support to the Nigerian military in the counter insurgency campaign.

This outstanding performance has been attributed to his deep understanding of the complexities of the asymmetric war tactics of the Boko Haram terrorists and his ever-evolving mastery of the operational tactics of fighting the insurgents with the effective use of the Armoured Personnel Carrier(APC).

His mastery of the APCs provides a tactical advantage in SARS operations.

CSP Mohammed and his men have won the admiration of the local population as courageous first responders whenever and wherever terrorists lunch an attack in Maiduguri, the ‘Home of Peace’.

Besides responding to attacks, the officer has led many successful offensive operations in the exclaves of Boko Haram, leading to the neutralization of hundreds of terrorists; rescue of women and children; rescue of security personnel abducted by the insurgents and recovery of large cache of arms and ammunition within the past years.

These efforts have been in collaboration with the Nigerian Military under the leadership command of Lt. Gen. Tukur Yusufu Buratai.

In the past five years, the frontline battle against Boko Haram insurgency in Northern Nigeria has been strictly under the command of the Nigerian military – especially the Nigerian Army and the Nigerian Air Force.

However, there have been occasions where the Nigerian Police Force (NPF) units have been involved in frontline activities before 2015.

On March 24th , 2012 at about 1730hrs, officers and men of the SARS squad exhibited an extraordinary act of gallantry in an operation when a group of hoodlums suspected to be Boko Haram tried to overrun Lamisula Police Division.

The insurgents were dislodged and, in the process, three were killed.

On April 6th 2012, at about 2330hrs, the Commander SARS led his officers to engage in an active incident to dislodge some insurgents who attacked Dikwa Police Division.

The insurgents had already loaded police properties including some weapons in the drive-away vehicle.

As they were about to drive off from the premises, the SARS team from Maiduguri engaged them in a fierce battle, which lasted for several hours.

Scores of the jihadist were killed and all the stolen weapons retrieved.

Five days later on the 10th April, at about 1920hrs, the same officer and his men showed an exemplary act of gallantry by responding to a distress call when a divisional police station in Banki was attacked by a group of insurgents.

Three of the terrorists were killed at the end of that encounter.

On 6th September 2012, at about 2045hrs, the same team raided a Boko Haram hideout at Bukar Tella word Bama LGA where a fierce battle led to the killing of ten Boko Haram insurgents.

Unfortunately, one Corporal Ibrahim Ali was killed during the encounter.

On 24th of January 2015 at about 0720hrs, the SARS team in collaboration with the military used tear gas smoke to repel Boko Haram insurgents from invading Maiduguri through the Maiduguri/ Damaturu road.

The following month on February 1, 2015, at about 0500hrs a large number of insurgents attempted to invade Maiduguri through Maiduguri/ Damboa axis.

They were repelled by the gallant team in coordination with the Nigerian Army by the effective deployment of tear gas smoke.

On May 7, 2013 the officer and his men exhibited another act of gallantry by dislodging more than 3,000 insurgents who invaded Bama town.

Leading from the front and without concern for his own safety, the officer and his team were dispatched from Maiduguri with two APC vehicles.

On their way, the insurgents had set up three ambushes against the team, undoubtedly, the officer successfully neutralised the terrorist's advanced team and headed to face thousands of the terrorist armed with various calibre of arms.

This battle ensued for more than eight hours, resulting to massive casualties on the side of the terrorist and recovering of kidnapped police families conveyed in three vehicles.

Also recovered, were the police and local government officials taken away by the insurgents as well as some of their weapons. Unfortunately, 27 police men and several soldiers were killed during the fierce encounter.

On 10/1/2013, 8/2/2013, 16/2/2013, following a tip off, SARS operatives on three occasions stormed insurgents enclaves in Bulabulin Alajari wards Maiduguri, a place used for concealment of robbed vehicles and other articles.

The insurgents on sighting the teams, opened fire on them with machine guns, rockets launchers and other assault rifles.

The SARS team promptly returned fire and overran the enclave. One of the insurgents, name not known, was shot, one other named Mohammed Hassan, was arrested while others fled.

The entire enclave was thoroughly searched and a total of twenty-four different make of vehicles stolen from innocent members of the public were recovered.

On January 6, 2019, The SARS team in collaboration with the IGP Intelligence Response Team apprehended 21 high profile notorious Boko Haram terrorist, responsible for all the bombings within Muna, Konduga Monday markets and other parts of Maiduguri.

On 26 December, 2019, Boko Haram militants ambushed a military convoy in North Eastern Nigeria, killing more than a dozen military and four police personnel of the SARS during raid on a nearby military base along the highway in Kukareta village, 20 km (12 miles) from Damaturu.

Note that villages along the road which connects Borno and Yobe states have been badly impacted by the resurgence of Boko Haram attacks.

In a reprisal attack against the killing of the four SARS operatives, on January 21, 2020, the team had another encounter with the insurgents in large numbers at Mainok in kaga LGA.

The insurgents dislodged the military from their base and made away with weapons. Two-gun trucks taken away from the military base were retrieved by the SARS teams including one other gun truck attached with Boko Haram flag.

Upon receiving the distress call, teams of SARS, CTU, Hunters on nipping point mobilized and moved swiftly to the scene where a camouflaged Hilux was abandoned with the body of an unidentified male.

In the process of a thorough search, the following fire arms and ammunitions were recovered. Two anti-aircraft guns with 4 spare barrels, one MG with 251 Ammunitions, 8 Ak 47 with 51 7.62mm and two Magazines, and one black Jacket.

These incidents of bravery from men like CSP Mohammed, many others and the SARS demonstrate the importance for inter-agency coordination , communication and collaboration in the theatre of war between all security agencies – especially the Nigerian Police. Without recognising the selfless efforts and sacrifices of individuals, the effort of the entire security architecture in the North East will continue to suffer a psychological deficit.

SEE PHOTOS OF CAPTURED WEAPONS BELOW: 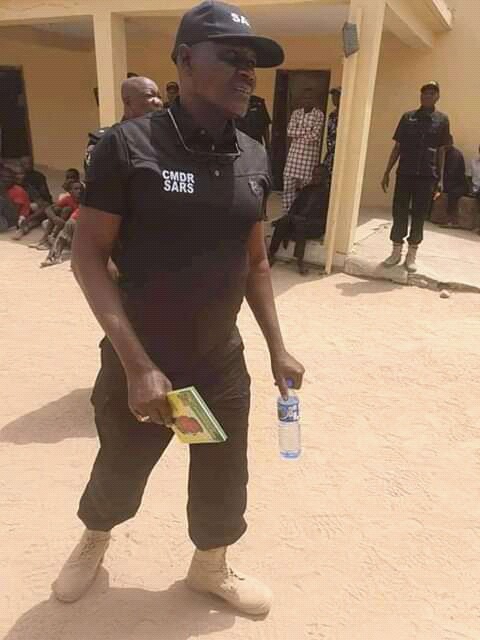 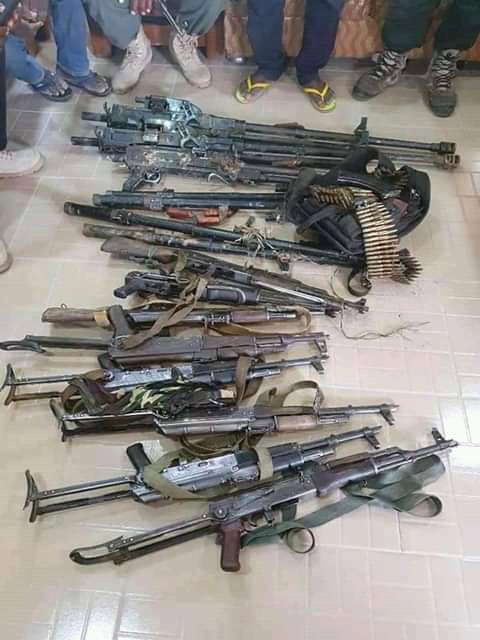 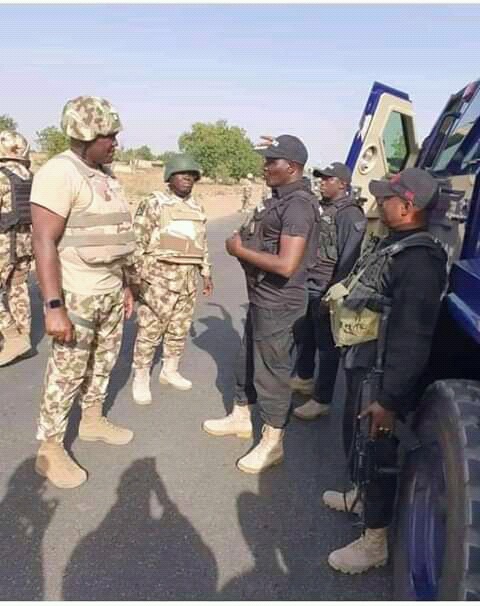 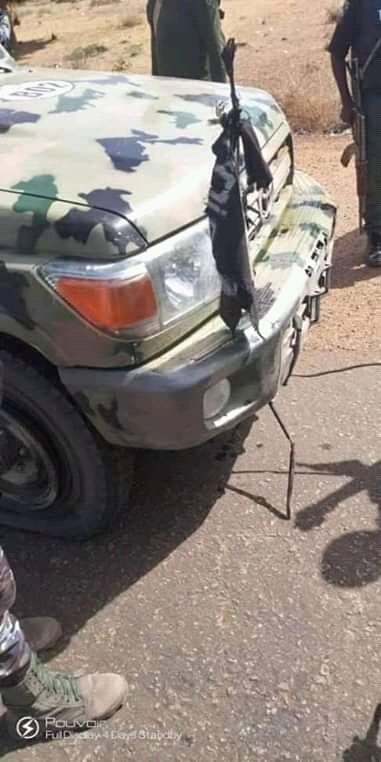 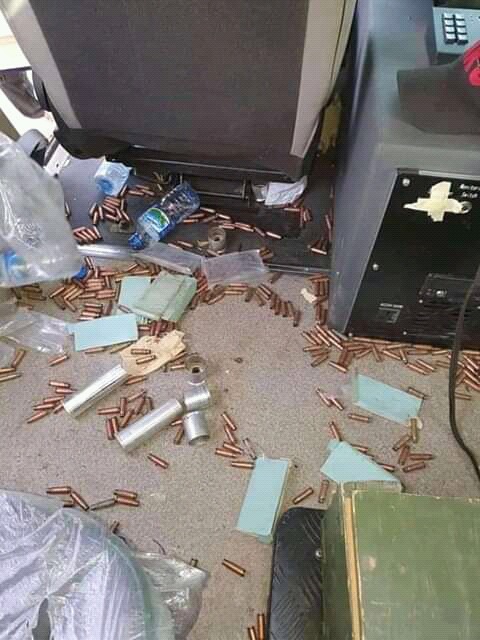 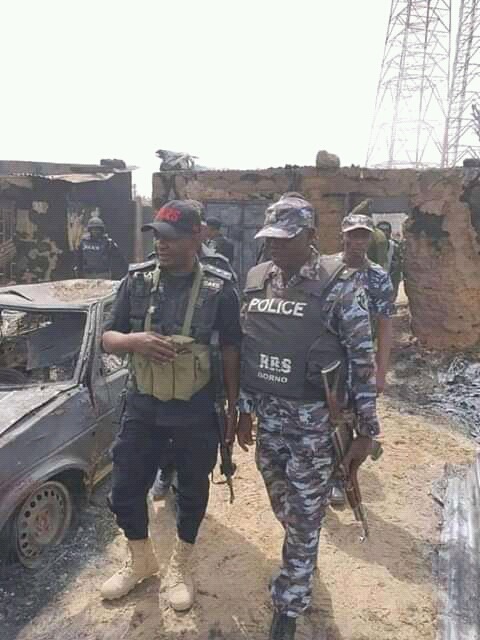 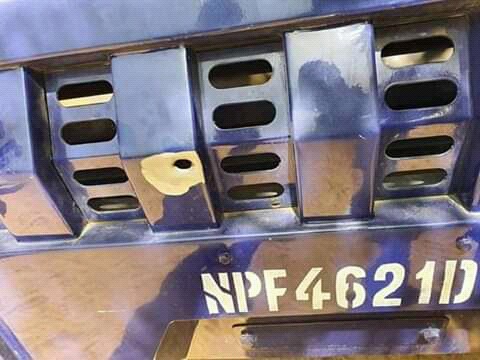 Follow us for more latest write-ups on our gallant Nigerian Soldiers and Police Force's achievements news.

Content created and supplied by: TopHub (via Opera News )