OPINION: The Punishment Pochettino should give Messi for His Rude Gesture in PSG vs Lyon Match

The 34-year-old Argentine professional footballer Lionel Messi is widely considered to be one of the best footballers in the world and is famous for all his career achievements in the Spanish La Liga club FC Barcelona. 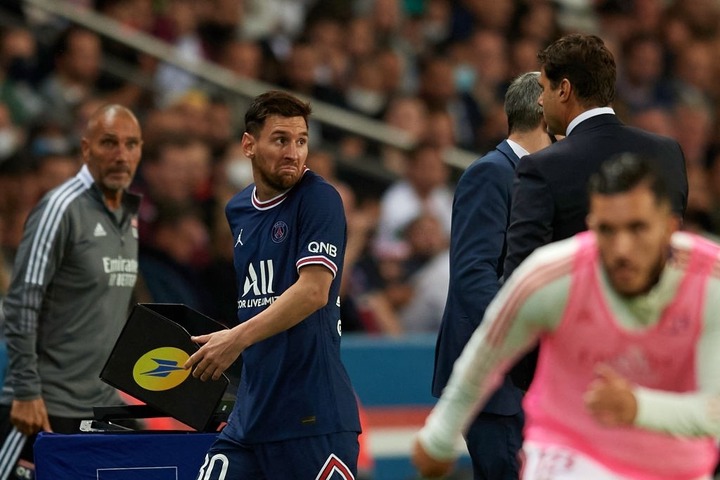 During the last European transfer window, Lionel Messi made a surprise permanent transfer move to the French Ligue one club Paris Saint-Germain from FC Barcelona as a free agent.

Lionel Messi has made three appearances for PSG since his arrival and the list includes the forward's Ligue one debut against Reims, a UCL clash with Club Brugge, and PSG's recent domestic league clash with Lyon which ended with a 2-1 victory. In this article, I'll be addressing an incident that happened between Messi and PSG's 49-year-old Argentine coach Mauricio Pochettino in the club's clash with Lyon

In the French Ligue one match fixture between PSG and Lyon, Lionel Messi was taken off the pitch in the 76th minute of the match and was replaced with Achraf Hakimi by Pochettino.

The newly signed Argentine forward wasn't happy with the decision made by the club's coach and failed to accept a handshake from Mauricio Pochettino after the substitution was made.

Messi's gesture in the match was a rude one and it's not right for players who truly respect their coach to do such a thing. Pochettino's decisions in PSG's match fixtures should be respected by every player in the club including the newly-signed Argentine forward.

I think that Lionel Messi should be disciplined by the coach for the rude gesture shown to him by the Argentine player in PSG's clash with Lyon.

The punishment I suggest should be given to the former Barcelona footballer is one most coaches often do to discipline their players when needed, which is The Bench Treatment.

Pochettino should intentionally bench Messi in PSG's next match fixtures as an act of discipline on the forward.