In today's article we would be sharing with you the Top 10 Longest Bridges In Africa.

A bridge is a structure built to span a physical obstacle, such as a body of water, valley, or road, without closing the way underneath. 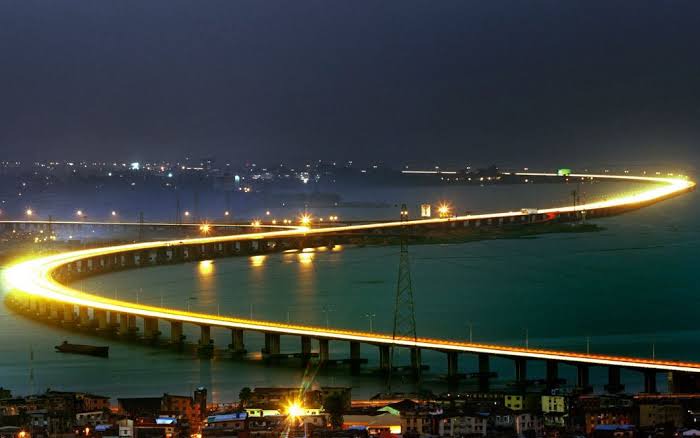 It is constructed for the purpose of providing passage over the obstacle, usually something that is otherwise difficult or impossible to cross. There are many different designs that each serve a particular purpose and apply to different situations. Designs of bridges vary depending on the function of the bridge, the nature of the terrain where the bridge is constructed and anchored, the material used to make it and the funds available to build it. 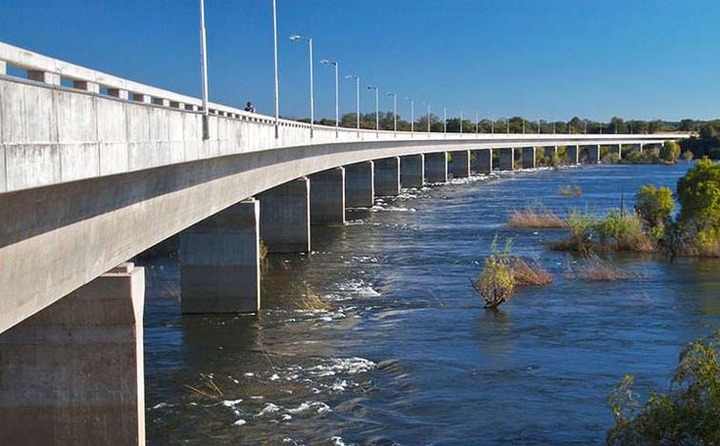 The Katima Mulilo Bridge (also known as Bridge 508 in the Namibian Bridge Register) was officially opened by the President of Namibia, Dr. Sam Nujoma, and President of Zambia, Levy Mwanawasa on 13 May 2004, in Katima Mulilo. 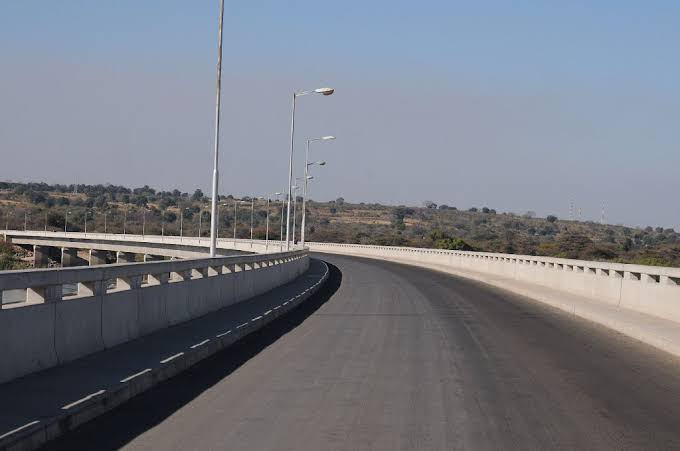 It carries the TransCaprivi Highway over the Zambezi River between Katima Mulilo, Namibia and Sesheke, Zambia. It is a road bridge, completed in 2004, 900 metres long and with 19 spans. It links Namibia's Trans–Caprivi Highway to the Zambian road network, forming a section of the trade route from south-central Africa to the Atlantic known as the Walvis Bay Corridor. It also carries tourist traffic. 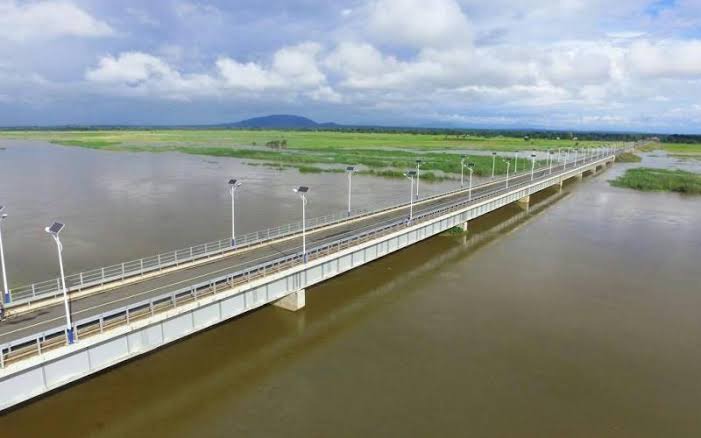 Mkapa Bridge is the longest bridge in Tanzania across the Rufiji River and was inaugurated in 2003. It was financed through a US$30 million loan from the Kuwait Fund, OPEC and the Government of Saudi Arabia. 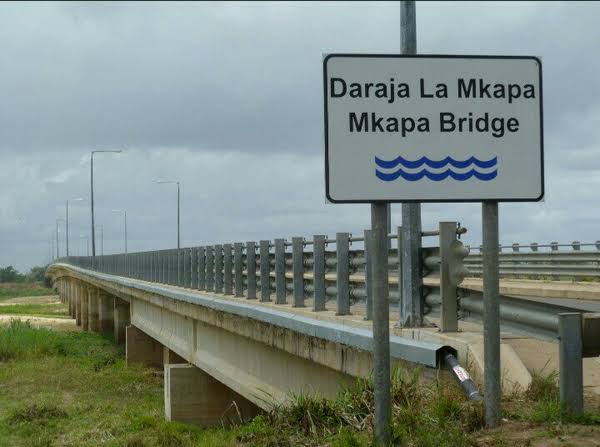 It was amongst the longest road bridges in east and southern Africa. The construction of the bridge has helped immensely in connecting the southern regions to other important areas of the country. It is named after Benjamin Mkapa, the third President of Tanzania. 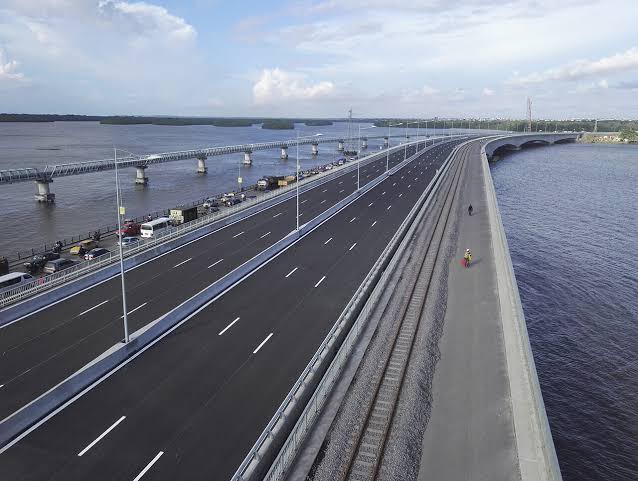 The Wouri Bridge, 5,900 feet (1,800 metres) long, constructed in the 1950s joins Douala to the port of Bonabéri and carries both road and rail traffic to western Cameroon. The city is connected by road to all major towns in Cameroon, has rail links to Kumba, Nkongsamba, Yaoundé, and Ngaoundéré, and is served by an international airport. 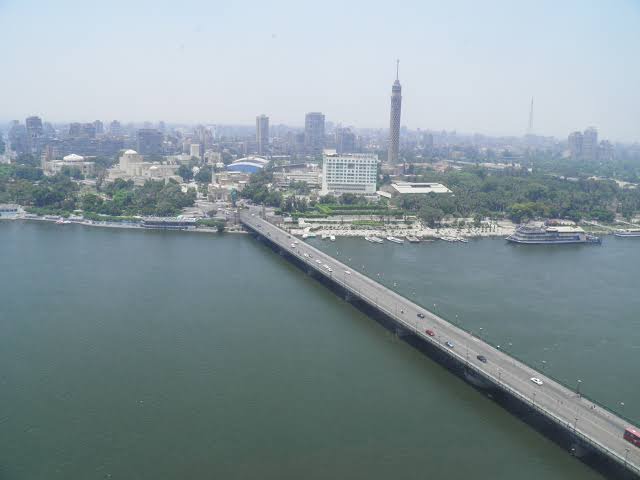 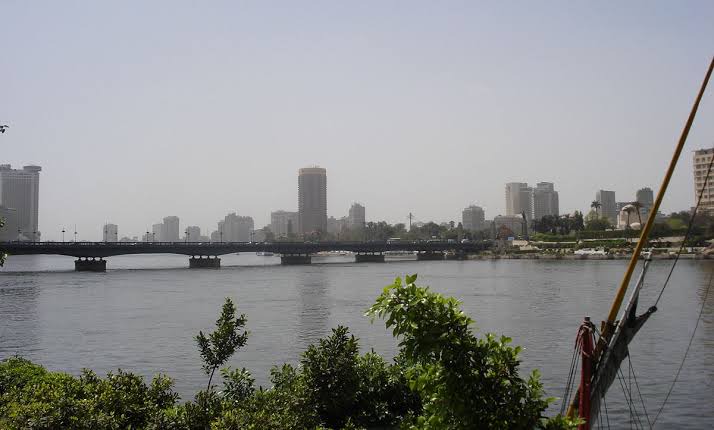 It is a historic structure dating from 1931 which replaced the first bridge to span the Nile River in central Cairo, Egypt. It connects Tahrir Square in downtown Cairo to the modern Cairo Opera complex toward the southern end of Gezira Island. At the bridge's east and west approaches are four famous large bronze lion statues; they are late 19th-century works by Henri Alfred Jacquemart, French sculptor and animalier. The newer and wider 6th October Bridge parallels its route 0.8 kilometres (0.50 mi) just to the north.

Armando Emilio Guebuza Bridge is a bridge located in Mozambique that crosses the Zambezi River. It connects the provinces of Sofala and Zambezia. It is named after Armando Guebuza, a former President of Mozambique. 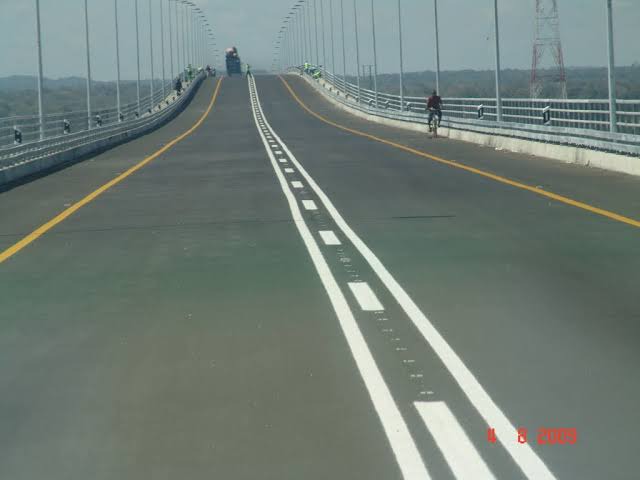 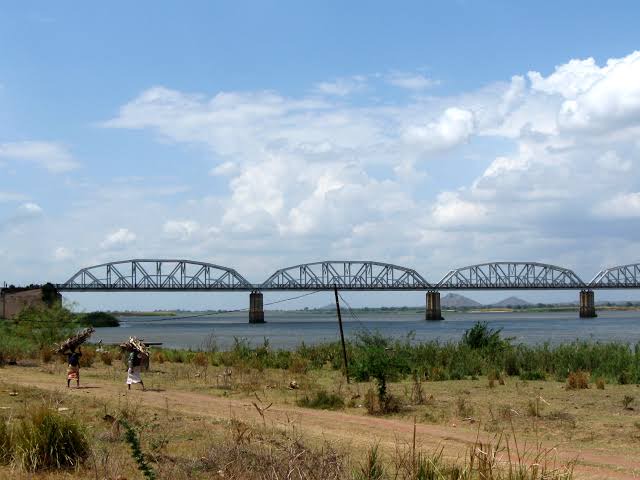 The Dona Ana Bridge spans the lower Zambezi River between the towns of Vila de Sena and Mutarara in Mozambique, effectively linking the two halves of the country. It was originally constructed as a railway bridge to link Malawi and the Moatize coal fields to the port of Beira. 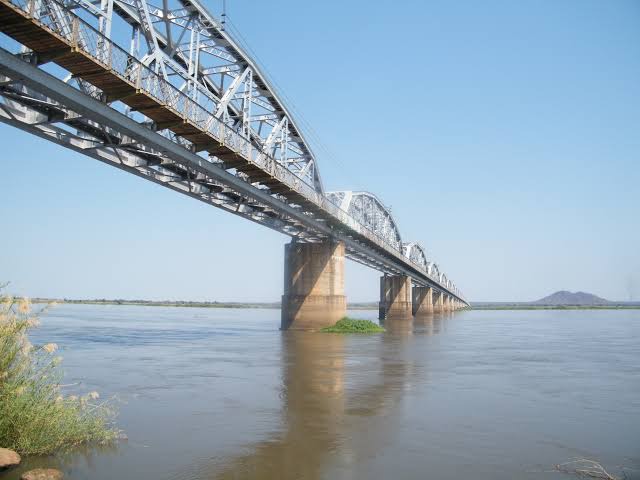 The bridge was completely closed to vehicular traffic in October 2006 for rehabilitation and re-conversion to a rail bridge and was reopened as a rail bridge in 2009. In 2017, it underwent renovation, particularly to its pedestrian lane, used by over 3,000 people daily. 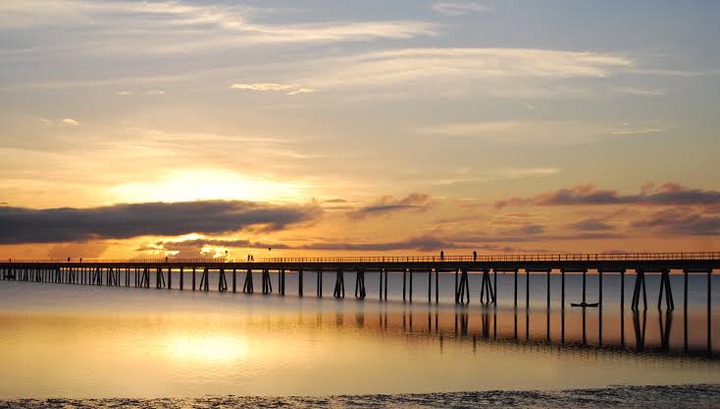 Mozambique Island Bridge is a bridge in Mozambique that connects the Island of Mozambique, the former capital of colonial Portuguese East Africa to the mainland over the Indian Ocean.

The Mozambique Island Bridge is a one-way, one-lane concrete bridge. In 1962, the government of Mozambique launched a tender for the construction of a 3,390 meter bridge to connect the Island of Mozambique to the mainland.

In July 2004, a construction to rehabilitate the bridge started with a $9-million budget. A lighting system was installed on the bridge in 2013. 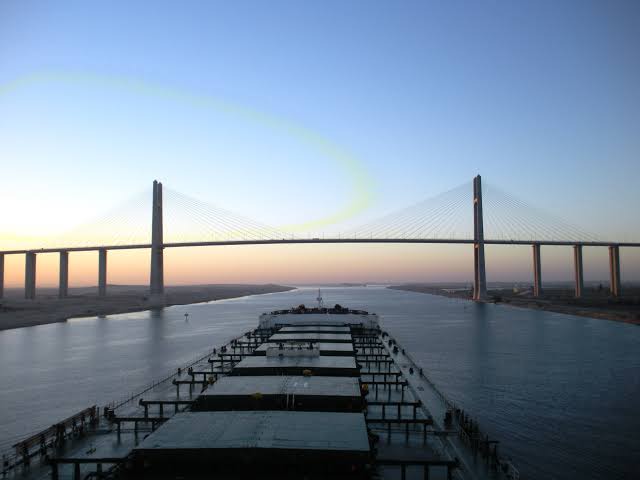 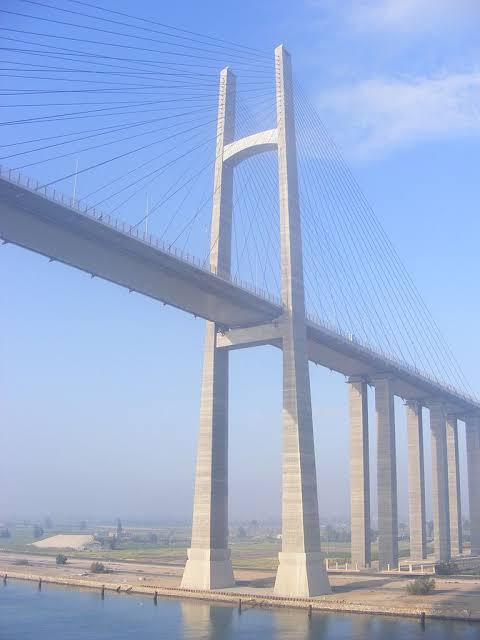 The Japanese grant, accounting for 60% of the construction cost (or 13.5 billion yen), was agreed to during the visit of then-President Hosni Mubarak to Japan in March 1995, as part of a larger project to develop the Sinai Peninsula. Egypt bore the remaining 40% (9 billion yen). The bridge was opened in October 2001.

It is a road bridge crossing the Suez Canal at El-Qantara, whose name means "the bridge" in Egyptian Arabic. The bridge links the continents of Africa and Asia. 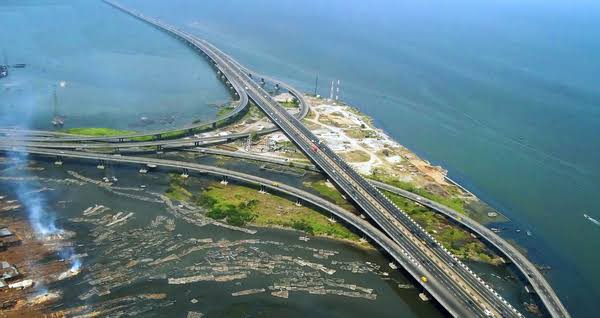 Third Mainland Bridge is the longest of three bridges connecting Lagos Island to the mainland, the other are the Eko and Carter bridges. It was the longest bridge in Africa until 1996 when the 6th October Bridge located in Cairo was completed. The bridge starts from Oworonshoki which is linked to the Apapa-Oshodi expressway and Lagos-Ibadan expressway, and ends at the Adeniji Adele Interchange on Lagos Island. 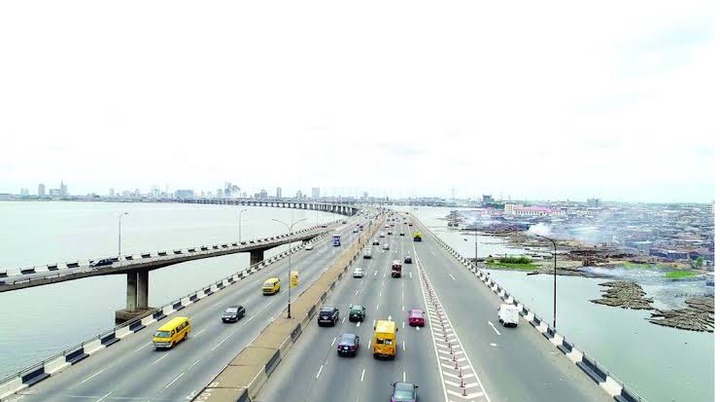 There is also a link midway through the bridge that leads to Herbert Macaulay Way, Yaba. The bridge was built by Julius Berger Nigeria PLC. A contract was awarded for a third mainland bridge in 1976. Construction of the bridge was done in phases. The first phase was contracted to a PGH consortium, a venture consisting, Impresit Girola and Borini Prono, while Trevi Group provided support services for piling. The first phase was designed to be 5 kilometers in length, starting from the Island and ending at Ebute Metta, towards Yaba. 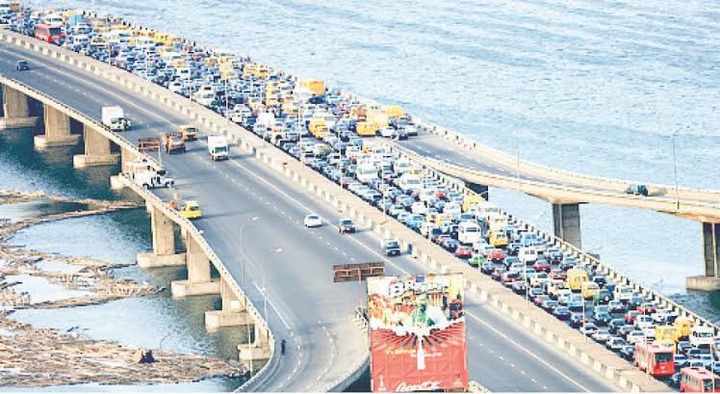 The bridge elevates to 3 kilometers above the water and made from pre-stressed reinforced concrete. Foundation piles had varying depths of between 36 and 54 meters and pile diameter is based on potential carrying road, diameters of 1500mm are used for the main bridge crossing the Lagos lagoon and for the slipway and approach roads, pile diameter was between 800mm and 1200mm. The first phase was completed in 1980.

The second phase from Ebute-Metta to Oworonshoki was awarded to Julius Berger in Nigeria.The phase one of the project was commissioned by President Shehu Shagari in 1980 and completed by President Ibrahim Babangida in 1990; it measures about 11.8 km in length.

According to a traffic report on Third Mainland Bridge in 2002, the number of vehicles in both directions recorded in 12 hours was 180,902 vehicles, which may have doubled or tripled after 16 years. 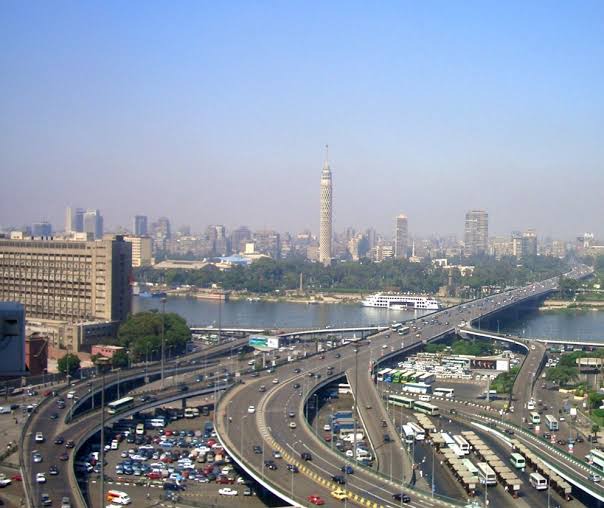 The building of the 6th October Bridge and causeway has been declared a national infrastructure project. 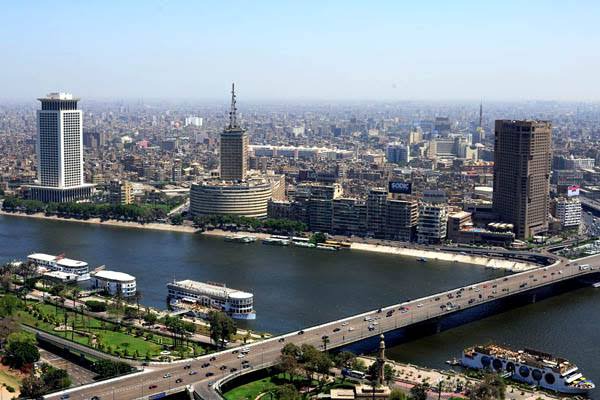 It is an elevated highway in central Cairo, Egypt. The 20.5-kilometre (12.7 mi) bridge and causeway crosses the Nile twice from the west bank suburbs, east through Gezira Island to Downtown Cairo, and on to connect the city to the Cairo International Airport to the east.