By Deephenominal (self media writer) | 7 days ago 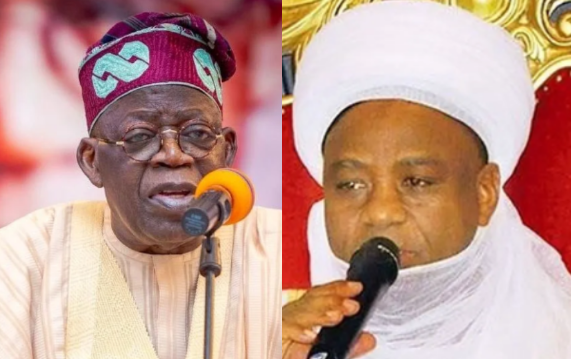 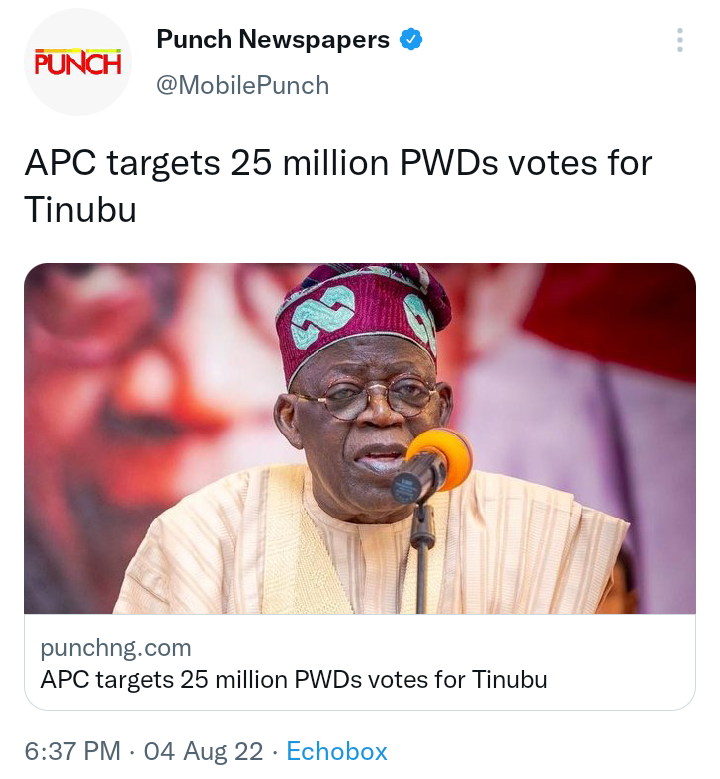 The All Progressives Congress on Thursday unveiled plans to attract over 25 million votes from Persons With Disabilities to secure victory for the party’s presidential flagbearer, Bola Tinubu; other governorship and National Assembly candidates ahead of the 2023 general elections.

This was disclosed in a statement issued by the APC National Leader of Persons With Disabilities, Tolu Bankole, at the inaugural national summit for state and zonal leaders, which was held at the Transcorp Hilton Hotel in Abuja.

Bankole said, “Over 25 million votes from PWDs are waiting to change the 2023 general elections narratives and we have resolved to set up an all-inclusive campaign structure to the polling units level, to work for the victory of Tinubu and Shettima as well as our governors and other candidates of our party.”

The development is coming three weeks after the APC national leader of Persons with Disabilities appealed to the Independent National Electoral Commission to address the plight of visually-impaired voters by providing braille ballots and dedicated polling units for the vulnerable in society.

Bankole made the call at a voter education and sensitisation training held in Osun State for people who were struggling with poor eyesight on the use of braille ballots ahead of the election.

While expressing appreciation to the President, Major General Muhammadu Buhari (retd.), for assenting to the Discrimination Against Persons with Disabilities (Prohibition) Bill on Thursday, Bankole appealed to state governors to domesticated the Act. He also called on the President to appoint a PWD as a minister.

“The summit passionately appealed to the conscience of state governors who have not domesticated the Discrimination Against Persons with Disabilities (Prohibition) Act, 2018 to bequeath an enduring legacy to the PWDs community.

“Equally, we resolved to write to the Independent National Electoral Commission (INEC) to know the correct data of PWDs voters. We ask INEC to extend the continuous voters registration exercise to prevent the disenfranchisement of eligible PWDs voters.

“On insecurity in Nigeria, we reject the drums of dooms and wars by merchants of instability. Nigeria’s security is the collective responsibility of all Nigerians. Enough is enough, this beat of war must stop, we in the PWDs community will not dance to it.

“This summit also charged all PWDs leaders to carry along women and children as a matter of priority. To achieve this, we shall create a directorate for women/children with disabilities to give them a sense of belonging.”

Sharia Law Not For Non-Muslims 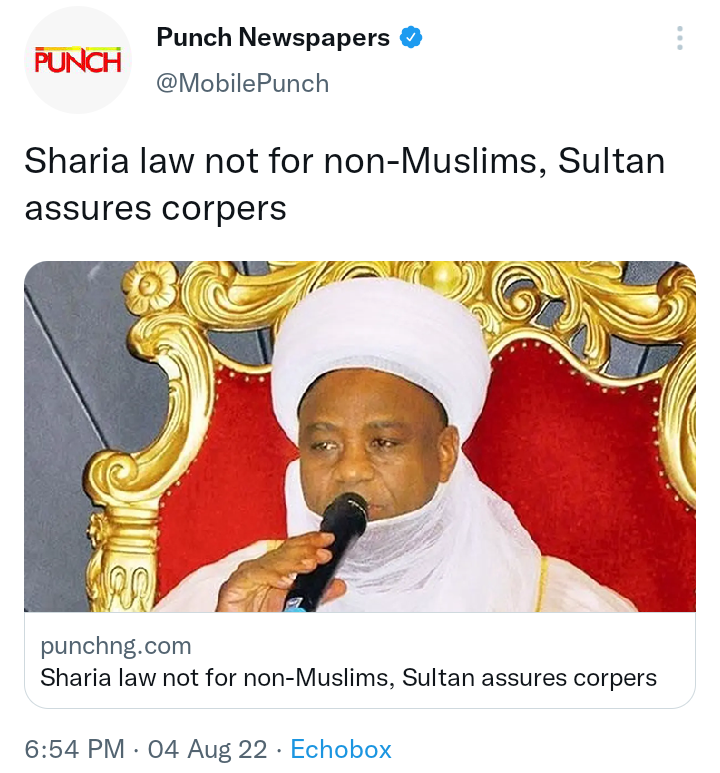 Sultan of Sokoto Alhaji Muhammad Sa’ad Abubakar has assured 2022 Batch ‘B’ Stream 11 corps members in Sokoto State that Shari’a Law is not binding on non-Muslims in the state.

He, however, assured them that their safety was guaranteed despite some security challenges facing the country.

Sultan gave the assurance on Thursday in his palace when the NYSC management team in the state led by the state coordinator and some selected corps members paid him a courtesy visit.

Abubakar further assured them that they would be allowed to practice the religion of their choice.

He noted that Sharia law is not binding on non-Muslims, stressing that nobody would be coerced to join Muslims against his or her wish.

“In Sokoto, Sharia law is only binding on Muslims, nobody will force you to wear hijab or force you to obey Islamic laws if you are not a Muslim he stated.

He enjoined the corps members to spread joy and embrace religious tolerance. He also urged them to continue to be law-abiding and serve as role models to the younger generations.

He implored them to perform their duties with diligence and guided by the provisions of the NYSC Act and Bye-laws as well as workplace rules and regulations.

“If you are posted to school, impact in the lives of the students, make them better than you met them,” he added.

The monarch urged them to respect the cultures and customs of their host communities.

“If you have a problem at the place of your primary assignment or where you are posted to, contact the district head over there they are your guardians in the community,” he said.

He maintained that injustice is responsible for most problems in society urging them to study and understand the lifestyle of the people of their host communities.

On his part, the NYSC State Coordinator, Muhammad Nakamba, said this batch of corps members are exceptional in terms of discipline and obedience to camp rules and regulations.

Nakamba said they were in the palace to seek royal blessings from Sultan while thanking him for unflinching support to the scheme.

The All Progressives Congress (APC) says it plans to challenge the results of the July 16 Osun governorship election at the election petition tribunal.

Gboyega Famodun, the state APC Chairman said this at a news conference on Thursday at the party secretariat, in Osogbo.

Mr Famodun said that the decision followed assurances by the party lawyers who said that there were good grounds to challenge the results after they had studied them.

“We are going to the tribunal. Our lawyers had informed us that we have good reasons to challenge the results of the election at the tribunal,” he said.

He decried the suspected anti-party activities of an APC faction in the state “The Osun Progressive (TOP).”

The chairman said that the faction, which was under the control of the Minister of Interior and former governor Rauf Aregbesola, worked for the opposition, the Peoples Democratic Party (PDP), to deny the APC victory at the election.

The Independent National Electoral Commission (INEC) on July 17, declared Senator Ademola Adeleke of the PDP as the winner of the Osun governorship election with 403,371 votes.

We Must Win Presidential, Governorship, All Elections In 2023 – APC Chair, Adamu 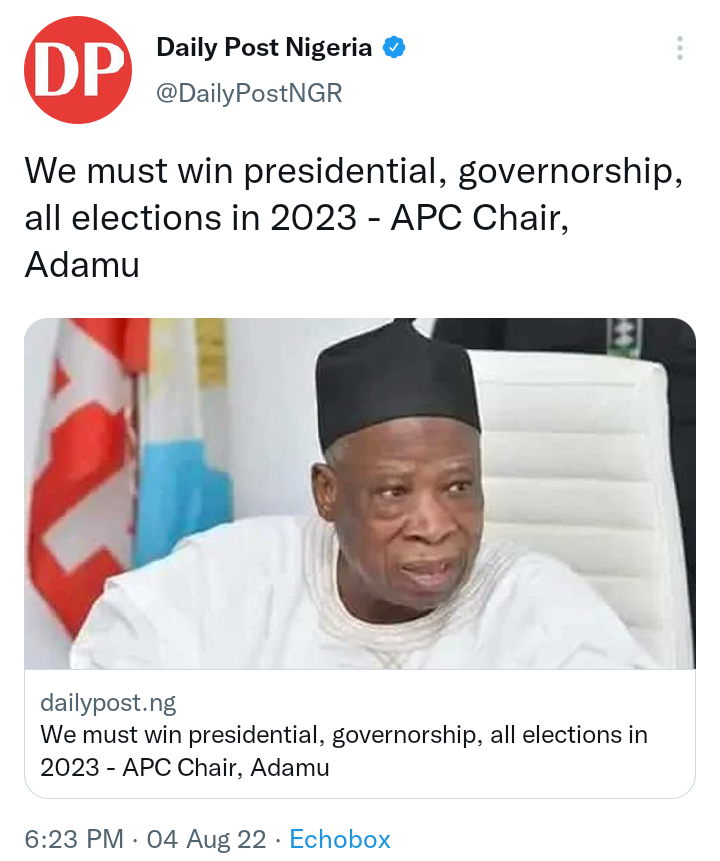 The National Chairman of the All Progressives Congress, APC, Abdullahi Adamu, has said the party must win big in 2023.

Adamu said APC must record resounding victories at the presidential, legislature, and governorship elections in 2023.

Speaking with journalists on Wednesday in Abuja, Adamu stressed that the APC would not be satisfied with just 25 percent votes.

“All the national elections, House of Representatives, Senate, Governorship, likely the presidential election, we’ll not be satisfied with just the 25 percent of votes cast.

“No halfway through it, if we’re to win, we must try to win every state,” Adamu stressed.

The APC National Chairman urged members of the ruling party to put their house in order and work towards the party’s victory in 2023.

Content created and supplied by: Deephenominal (via Opera News )