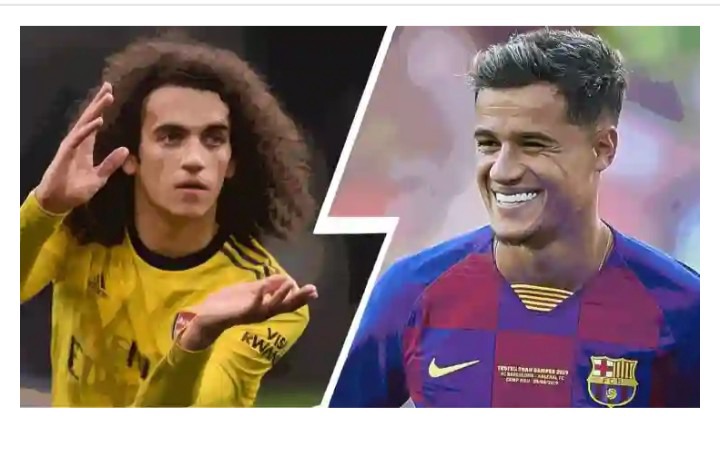 Barcelona are reportedly in talks with Arsenal over a possible swap deal involving Philippe Coutinho and Matteo Guendouzi in the summer.

Guendouzi’s future has been in the news lately following a series of disciplinary issues at the club, with Mikel Arteta leaving him out of his match day squad since the fuss in the game against Brighton & Hove Albion last month.

The Frenchman has been frozen out at the Emirates Stadium and has missed the Gunners’ last eight games across all competitions including the FA Cup semi-final win over Manchester City on Saturday night.

Coutinho on the other hand has failed to make anything productive from his move to Barcelona after forcing his way out of Liverpool.

The Brazil international failed to secure a starting spot in the 2018/19 season with the Catalan club which since seen him been loan to Bayern Munich where he has spent the 2019/20 campaign.

However, Foot Mercato reports that the 21-year-old could be used as a makeweight that will see him offloaded to Camp Nou with Coutinho heading to the opposite direction. Guendouzi was a regular under former manager Unai Emery but has done little to convince Mikel Arteta reinstate him in his place, with his below par behaviour said to have angered the boss.

He has recently been linked with Paris Saint-Germain, Inter Milan and couple others, while Coutinho is reported to be a target for Premier League sides including Manchester United, Chelsea and his former side.

Kia Joorabchian who acts as an agent for the Brazilian admitted recently that the player is open to a return to the English top-flight this summer.

“He has a desire to come back to the Premier League at some point. It may not happen this year, it may happen this year – we don’t know. We have not discussed anything for now,” he told Sky Sports. It will be interesting to know how this speculations continues in the coming weeks.