President Muhammadu Buhari has appointed a secretary and board members of the Economic and Financial Crimes Commission (EFCC). 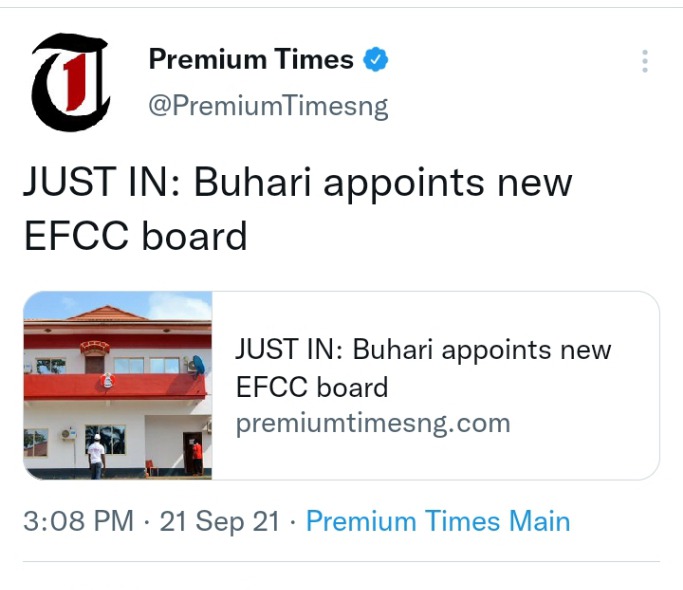 They are George Ekpungu as Secretary (Cross River); Luqman Muhammed (Edo); Anumba Adaeze (Enugu); Kola Adesina (Kwara); and Yahaya Muhammad (Yobe) as members of the board.

The president forwarded the nominees' names to the Senate for review and confirmation.

His request was contained in a letter dated September 17th, which was read aloud by Senate President Ahmad Lawan at the start of plenary on Tuesday.

The president explained in the letter that the request for confirmation of the nominees was made in accordance with Section 2(1) of the Economic and Financial Crimes Commission (Establishment) Act, 2004. 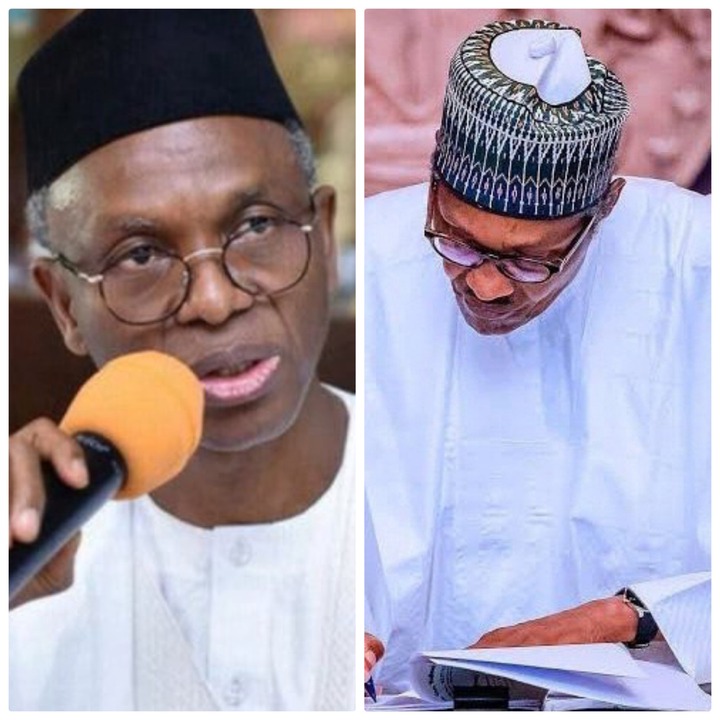 The governor of Kaduna State, Mallam Nasir El-Rufai, has advised his southern counterparts not to dissipate energy on anti-open grazing laws that cannot be implemented. 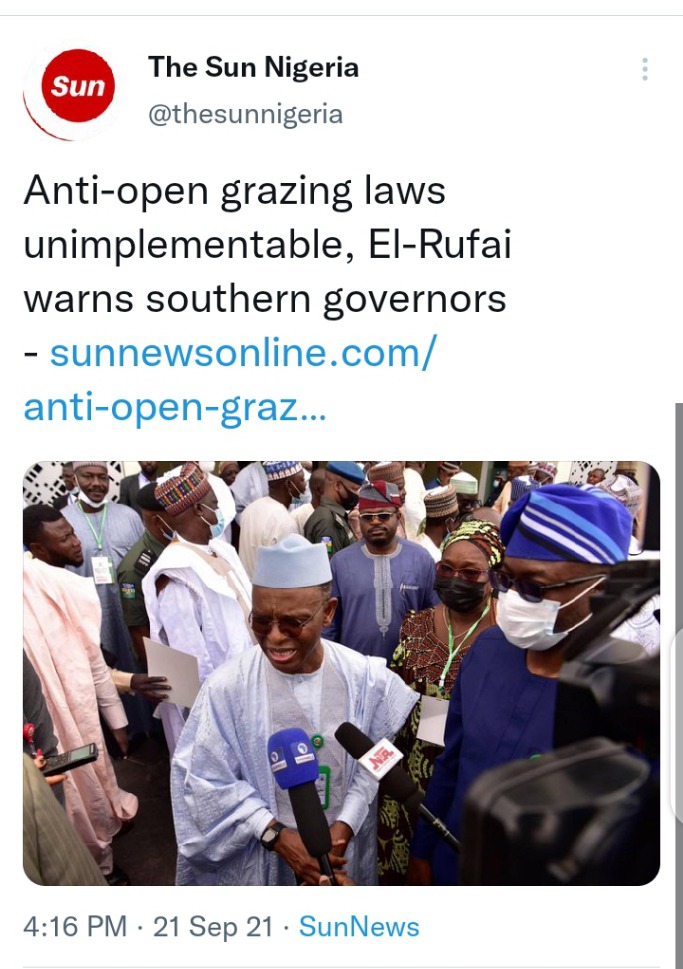 Speaking when he paid a short visit at the headquarters of the All Progressives Congress (APC) on Tuesday, Governor El-Rufai revealed that the Central Bank of Nigeria (CBN) has supported his state with N7.5 billion out of the N10 billion required to build a ranch.

The Kaduna governor cautioned southern governors that it is unhelpful politicising grazing rights and passing legislation that they know cannot be implemented.

Why table is turning against bandits in Katsina, others -Lai Mohammed

Nigeria’s Minister of Information, Lai Mohammed, has said that the “table is turning” against bandits in Katsina and other North-West states after security measures imposed by governors. 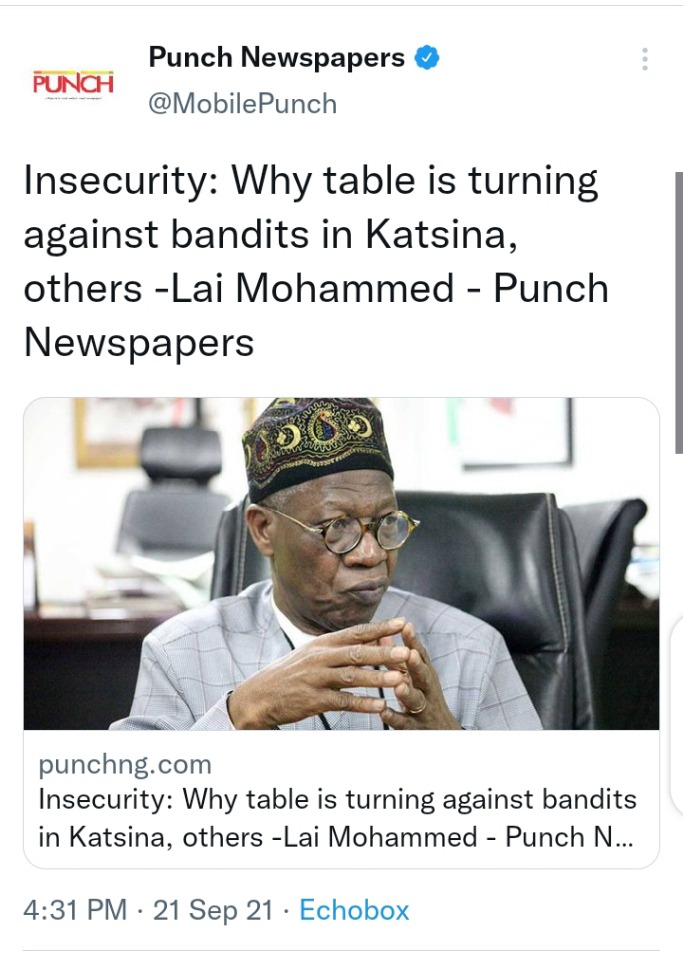 He also said the security measures were supported by the military, which stepped up its kinetic approach.

He said during a media visit to Katsina State on Tuesday.

The Delta State House of Assembly on Tuesday passed a bill for a Law Prohibiting Open Grazing, Indiscriminate Breeding, Rearing and Marketing of Livestock in Delta. 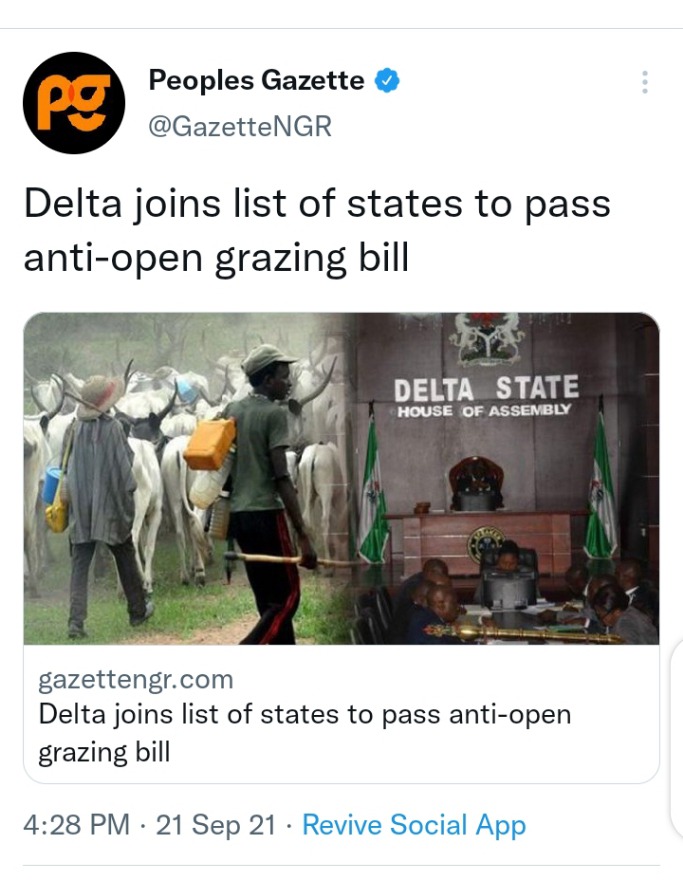 Also known as the “Anti Grazing Bill”, the passage followed a motion for the third reading by Majority Leader of the House, Ferguson Onwo, during plenary in Asaba.

The motion which was unanimously adopted, was seconded by Minority Leader of the Assembly, Innocent Anidi.

Earlier, Chairman of the House Committee on Special Bills, Pat Ajudua, had presented the report on the bill on the floor of the House, which was received and adopted.

While presenting the bill, Ms Ajudua, said inputs by stakeholders formed part of the proposed law.

She noted that the bill, when signed into law, would prohibit the carrying of firearms, either licensed or otherwise, by residents or individuals in the state, just as it seeks to address the arbitrary rearing and movement of livestock.