By Delexino (self media writer) | 18 days ago 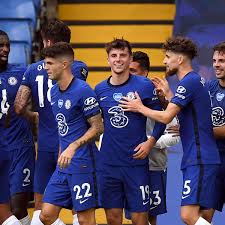 Chelsea Football Club, one of the contenders for this season's English Premiership Crown seems to be the most popular teams this week either negatively of Positively.

From other teams linking themselves to their players to, coaches trying to downgrade their system of play.

It is becoming ridiculous that every struggling coaches in their clubs saying Chelsea are a defensive team, I strongly disagree.

Aside from Liverpool football club at this stage of the competition with many goals scored as a team, Chelsea Football Club is next. I think theses coaches talking should hope to have the personnel Chelsea team has instead because, the energy used by the Chelsea team players, is what was lacking in other players in other teams.

The Chelsea Coach also does not play a player that is not 100 percent fit be you who because, his system requires massive defending and massive attacking. Thomas Tuchel won the October Manager of the month's award with 4 Chelsea Football Club wins, one goal conceded and more that 12 goals scored. Defensive team don't score that much.

Just like the Chelsea Coach's first interview, Chelsea Team are now becoming a team nobody wants to play against. In some hours time, they will continue from where they stopped before the last international break brought a blip to, their concentrations against Burnley Football Club. They will be at Leceister Football Club's playing for the whole 3 Premiership points, I hope those branding them as a defensive team will watch their game and have a rethink above their comments. The Chelsea team now, are fearless.

Content created and supplied by: Delexino (via Opera News )