By AkwaOnline (self meida writer) | 26 days 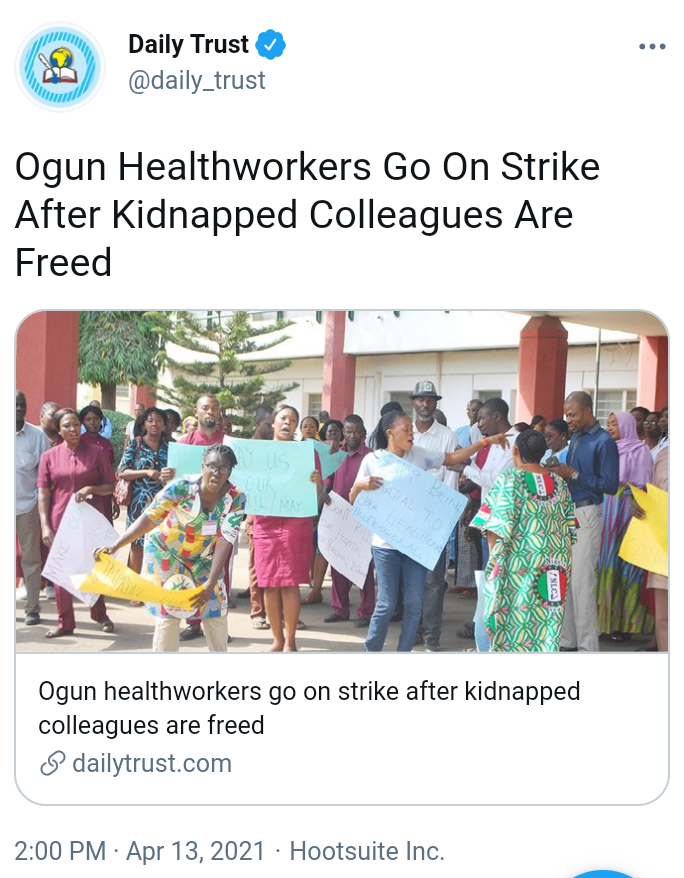 A doctor, Oladunni Odetola, and a nurse, identified as Bamgbose, who were kidnapped in Ogun State have been released, but doctors and nurses are proceeding on a strike to protest the government’s poor handling of the abduction.

Odetola, who is the head of General Hospital, Imeko, Imeko-Afon Local Government Area, alongside the nurse was kidnapped on Wednesday last week on Abeokuta – Imeko road.

Our correspondent gathered that the gunmen had emerged from the bush at Olubo village to attack their targets.

Their abductors subsequently demanded N20m ransom, a development which led to fund raising among the health workers in the state in order to secure the release of their colleagues.

The State Chairman of NMA, Ogunlaja Oladayo confirmed their release after about six days in captivity, in an interview with Daily Trust on Tuesday. 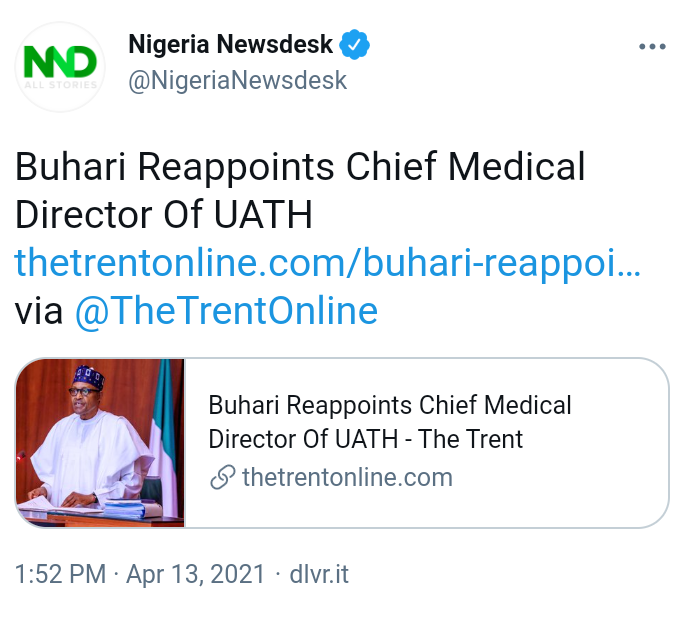 A statement issued to the News Agency of Nigeria, NAN, in Abuja on Tuesday, April 12, 2021, revealed that the appointment of Prof. Ekele would be valid for another term of four years.

Buhari while congratulating him on his reappointment, urged him to use the responsibility given to him to continue with the development of the hospital and health sector in the country.

“Prof. Ekele officially took over from the Acting CMD, A.S. Haruna, on July 3, 2017, and has performed creditably well in infrastructural development, research, clinical services, and industrial relations, among others,” the statement added. 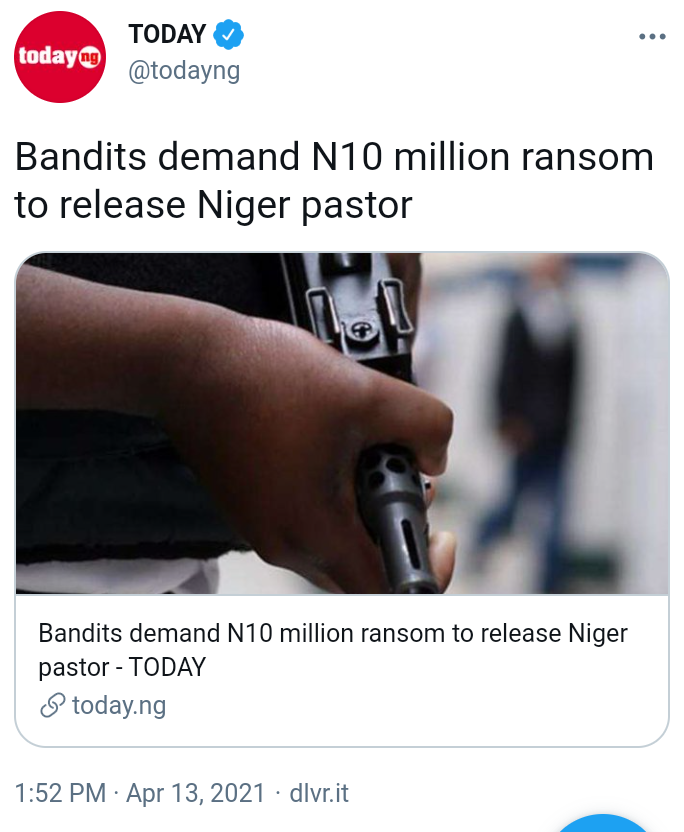 The kidnappers of the Pastor in-charge of a Baptist Church in Yakila town, Rafi Local Government Area of Niger State, Bitrus Gyang, have demanded a N10 million ransom to release the clergyman.

This is coming as bandits in the early hours of yesterday raided communities near Yakila town, during which three villagers were kidnapped.

Gyang, who was abducted about three weeks ago, newsmen learnt, had been taken into Zamfara forests by the bandits following the involvement of local vigilante in his initial release plan.

When the cleric was kidnapped, a reliable source in the church said his abductors demanded two brand new Bajaj motorcycles each costing N500,000; 100 litres of petrol and recharge card of any network valued at N100,000, but after negotiation, the bandits agreed to half the demand.

THISDAY was told that when the ransom was taken into the forest, they were unaware that some local vigilantes were following behind, and immediately the ransom was collected, the vigilance group members opened fire on the bandits killing two of them instantly. 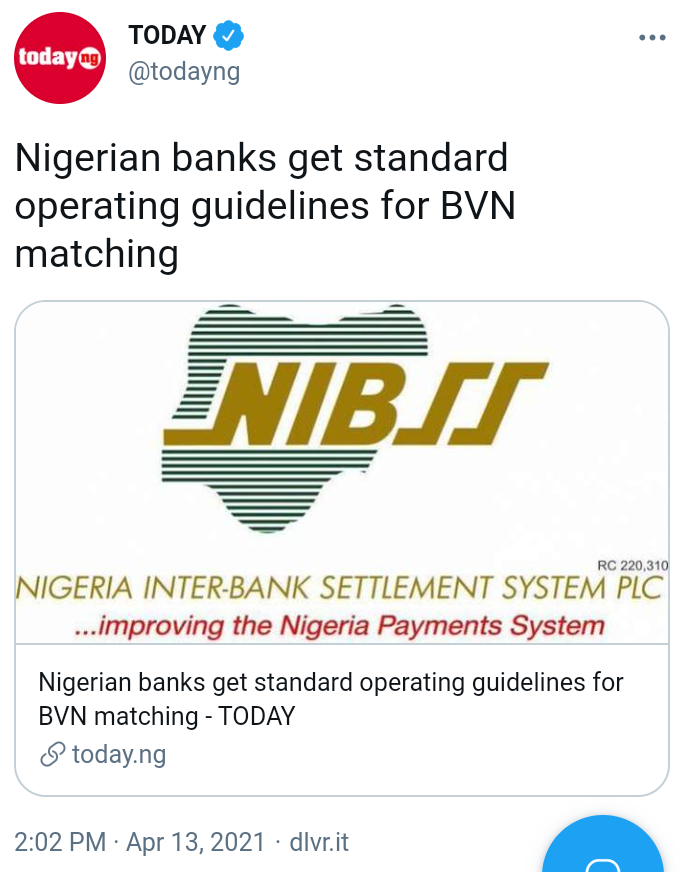 This, the company owned by all deposit money banks said, is to undergird the centralised BVN for a uniform repeatable approach in using the system in the banking industry.

This uniform approach needs to define the routine processes and procedures followed by every organisation in the industry that would facilitate consistent conformance to technical and quality system requirements and support data quality.

In a statement to this effect, it said, the NIBSS standard operating procedure for the BVN system would be specific to the banking industry and assist the industry to maintain their quality control and quality assurance processes and ensure compliance with governmental and nongovernmental regulations.

This document is developed by the Bankers’ Committee Operations committee for the project. The Operations Committee is commissioned to champion the development of BVN standards for the banking community. 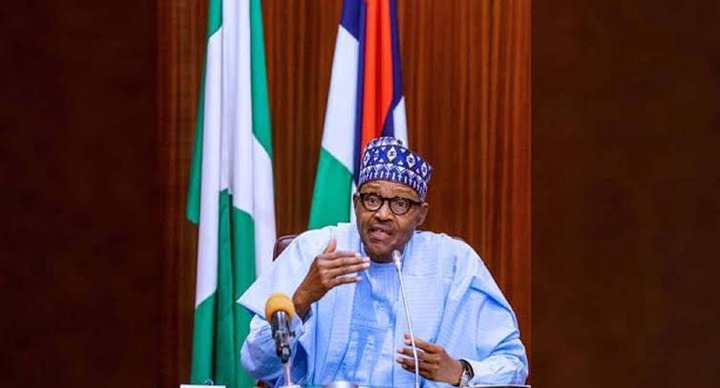