By People'sDaily (self media writer) | 26 days ago 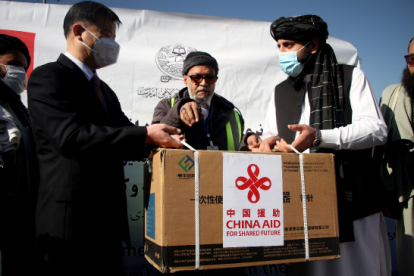 Afghanistan receives 800,000 doses of COVID-19 vaccines and syringes donated by China, Dec. 8, 2021. The vaccines are the first batch of a 3-million-dose donation under a 200-million-yuan ($31 million) emergency humanitarian assistance program for Afghanistan announced by the Chinese government. (Photo courtesy of the Chinese Embassy in Afghanistan)

Afghanistan’s deadliest earthquake in 20 years caused heavy casualties and economic losses. As a friendly neighbor and sincere friend of the country, China announced to provide humanitarian aid to Afghanistan and delivered the aid materials promised at the earliest time possible.

China’s selfless assistance for Afghanistan following the disaster is a vivid example of the mutual assistance and friendship between the two peoples, as well as a concrete action of China to build a community with a shared future for mankind. It mirrors the sense of responsibility of a major country.

China is among the first countries that have provided the biggest and most tangible aid to Afghanistan. In just about two weeks after the earthquake occurred, aid materials were sent by China via its Y-20 cargo planes and charter flights to Afghanistan. Besides, Chinese enterprises and overseas Chinese in Afghanistan also lent a helping hand, sending donations of medicines, tents and capital to disaster-hit areas. 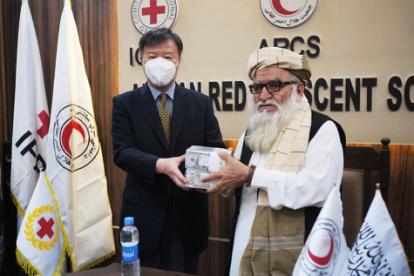 China’s assistance lit a hope for the Afghan people. They lauded the aid that came right on time and expressed heartfelt thanks to their friendly neighbor.

The Afghan people live in a country that has long been tormented by wars and chaos. China pays close attention on the difficulties faced by the Afghan people and is always offering assistance for them.

China keeps a people-centered approach in its assistance to Afghanistan. In a timely manner, China offered food, winter supplies, vaccines and drugs to meet the demand of the Afghan people.

China builds international synergy in its assistance to Afghanistan. It respects the leading role of the Afghan interim government in receiving foreign aid and opposes the politicization of humanitarian aid. 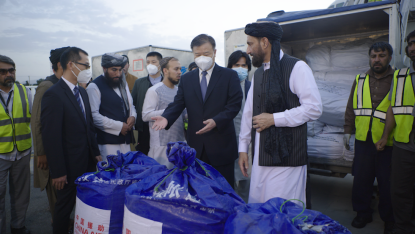 The first batch of earthquake relief supplies donated by the Chinese government arrive at Kabul International Airport in Kabul, capital of Afghanistan, June 27, 2022. (Photo courtesy of the Chinese Embassy in Afghanistan)

In March this year, China hosted the Third Foreign Ministers’ Meeting Among the Neighboring Countries of Afghanistan. The meeting promoted consensus building among all parties relevant on the severe humanitarian difficulties facing Afghanistan, and decided to keep offering humanitarian aid for the country and supporting Afghanistan’s economic reconstruction and self-generated development.

China never interferes in Afghanistan’s internal affairs, never pursues self-interest in Afghanistan, and never seeks a sphere of influence. China will continue to pursue the policy of friendship toward all Afghan people. It supports Afghanistan in building an inclusive government, ending turbulence, restoring stability and rebuilding the country, so that the Afghan people will be able to enjoy the benefits of peace and tranquility.

How a major country deals with its relations with Afghanistan mirrors its conscience and sense of responsibility.

The arrival of Chinese airplanes carrying disaster-relief materials at Kabul airport triggered wide attention on the internet. It was compared with the terrifying scene of two people falling off a fleeing U.S. aircraft last August.

“At Kabul airport, one airplane took lives while the other sent hopes,” said an internet user. Such contrast clearly explains major country responsibility.

The U.S. is the initiator of the current humanitarian disaster in Afghanistan. It shoulders more responsibilities than any other country does in providing economic, livelihood and humanitarian aid to the Afghan people. However, rather than taking the responsibilities, the U.S. split $7 billion of Afghan frozen assets. Such “robbery” made Afghan people’s miseries even more miserable and has been widely condemned by the international society.

Afghanistan is currently in a critical period to turn chaos into stability. To promote the peaceful reconstruction of the country, the international society must play a constructive role.

China will keep providing assistance to Afghanistan for the latter’s post-disaster reconstruction and disaster relief as its capacity permits, and work with the international society to play a constructive role in the peaceful reconstruction of Afghanistan upholding the vision of building a community with a shared future for mankind.