Lessons Every Nigerians should learn From the throwback photos of this couple.

By NigeriaNews001 (self media writer) | 2 years ago

Recently, news of a white woman who was forced out of her father's house for marrying her black lover, was seen all over different social media platforms. Many Nigeria's commended what she did for her man, at such a difficult time of her life.

Two interracial love birds married each other against the wish of the bride's father, a decision the bride took to prove the love she had for her husband, many years later they tell the story in smiling faces.

Mary, a white woman was sent packing from her original home in Trinidad when her father discover her love affairs with Jake her black lover. Her father was horrific by decision to marry a black man, he categorically made it obvious that he will never let her do so, which she intentionally later did, leading to her banishment from her original home.

Marry and Jake are from Solihuli, England, and are married to each other despite opposition to their union by the bride's father. Mary is currently 81 years of age and she's happily married to her husband. Mary narrate how her father told her that "if she marry black Man (Jake), should never set her foot in his house again". This wasn't only the problem, during the first year of their marriage, she confessed that she almost gave up, living in Birmingham was like hell, "i cried all day and barely eat, no one would speak to us...".

Mary, said they had to no shelter nor means of livelihoods, no one was willing to employ a black man or give them shelter to stay because her husband was black.

It was has a result of the hardship that befall them, Mary said she gave birth to a stillborn son during eight months of her pregnancy, adding it was due to the stress she passed through. 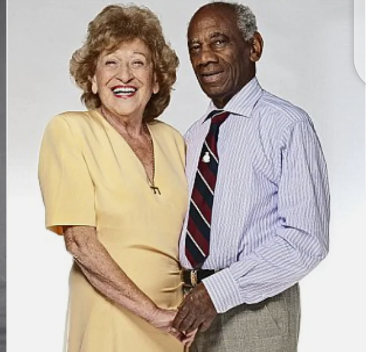 Marry despite all that has befallen them she said, she has never for one day regrets the decision she took many years ago, as they Celebrate their marriage even at old age.

Love is to be expressed and felt by a partner, not to be meaured or compared like some young couples do today, this lead to the next lesson.

2. Keep your family out of the public or family members:

Mrs Mary took a decision, that almost ruin her life, she suffered the consequences during the first year of her Marriage, this was because her family was involve, the public decide how they lived their, just because her husband was a black man.

3. You can only find true happiness within:

After many years being married, at age 86 Mrs Mary and Jake her husband stills lives happily as a couple, maybe if she had gone with her father wish and marry a white man, she might as well be suffering the guilt of divorce or being a single mom.

While others are trying to fixed your life remember nobody will love you, more than you love yourself.

There's no blueprint for a perfect Marriage, while Mr A is having a successful marriage, doesn't mean if you take that same step, you will be guarantee of success in your own marriage. The most important thing to do is that you find a system that works best for you and your partner and work with that system.

5. If you are willing to work at it, everything will work out just fine.

A lot of broken marriages and divided homes would have be saved if the both partners are Will to put in their best into the saving the marriage. The most important questions to ask and answer are: 'do I love my partner? And do I want to be with them forever?' If the answers to these questions are 'Yes', then putting in work to fix the marriage should come more naturally. .

Hope you find a peaceful and loving home like Mrs Mary and her husband Jake.

Also tell us, what feel about Mrs Mary decision.

Content created and supplied by: NigeriaNews001 (via Opera News )