Ekiti State Governor Kayode Fayemi at the weekend clarified that the All Progressives Congress (APC) "Muslim-Muslim" ticket was not done to undermine the influence or importance of Christians but as a deliberate political strategy to win the 2023 presidential election. 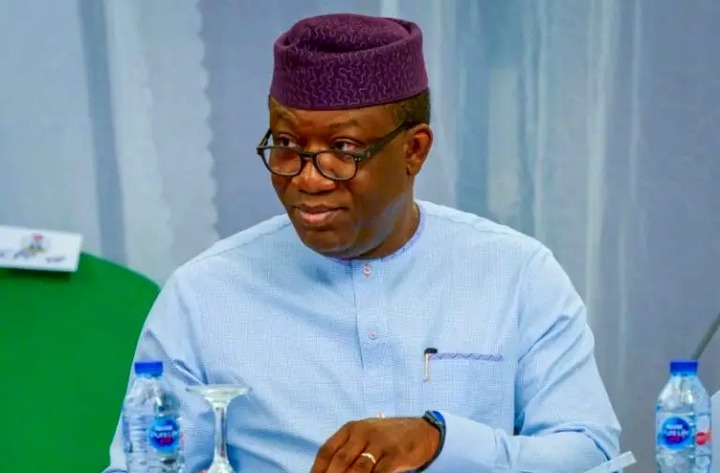 According to vanguard, This came on a day when the Islamic organisation known as the Osun Muslim Community, OSMC, yesterday described the excitement over the APC Muslim-Muslim ticket as unnecessary, especially by the Christian Association of Nigeria, CAN.

Fayemi allayed fears of Christians in the country over the controversy caused by the ticket, saying the choice of a Muslim candidate as the APC presidential candidate was not due to lack of competent Christian politicians from the North, as falsely claimed in some quarters.

The governor during a courtesy visit to the new leadership of CAN in Ekiti State led by its president, Dr Emmanuel Aribasoye, said there were many competent Christians in the North and across Nigeria.

He also said that the responsibility of a church where social justice is preached should include looking into the problems Christians face and finding ways in which good governance can address and improve them.

His words: "Many Christians see politics as a dirty game and therefore do not participate in the political process. The time has come to recognise that there are good reasons for Christians to get involved in politics. In my view, whatever makes us good Christians is also good citizenship.

"You have raised an issue that troubles the minds of many Christians, especially Christians who are not involved in politics, but I can tell you that Christians who are involved in politics are also concerned about the Muslim-Muslim ticket you have raised. Not so much because of religion, but because of fair representation, which will always be relevant in a multi-ethnic, multi-religious and multi-cultural environment. But I have also had occasion to discuss this with our political colleagues and our fathers in the Lord.

"But I encourage Christians to do what is expected of us. Yes, the excitement must continue, and for my part, as a Christian, I have told both the presidential candidate and the leaders of the other parties that we must take the swift action we should have done earlier by contacting Christian leadership and explaining the context of the upcoming election. Even if they disagreed with our choice, they would have seen the sincerity of intent and realised that the decision was not based on competence, because we have competent Christians all over Nigeria, but on strategic policy moves, which is what we do in politics. We have to look at scenarios and calculate where the votes will come from, it is a numbers game.

"I think it is time for Christians to move away from the theology of alienation - the belief that politics is dirty and not for God's children. When serious Christians, committed to the ideals of social justice and the common good, turn their backs on politics, they open the door for unprincipled opportunists to come to power. Fortunately, not all of us can or will hold elected office. Nor do we have to be. It is important that each of us find our place in the movement to build our nation and be true to the demands of that task."

Earlier, the new CAN chairman in the state, Dr. Aribasoye, who commended the governor for his generosity towards CAN in Ekiti, said the church was not at all happy with the Muslim-Muslim ticket of the ruling party, calling it "a cause for concern".

CAN - unnecessary noise - The Osun Group

Meanwhile, the Muslim community in Osun has advised CAN to create a political forum that focuses on partisan politics rather than using the religious platform for partisan games.

OSMC president, Sheikh Mustapha Olawui, at a press conference to mark the 1444 Hijra celebrations in Osogbo, said: "If people are not happy with the APC-Muslim ticket, they should vote for another party, there is no need for such clamour.

Content created and supplied by: 9jadirect (via Opera News )