By obottex (self media writer) | 16 days ago 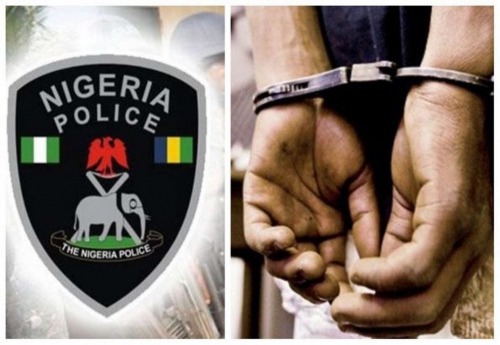 Grace Iringe-Koko, the state's Police Public Relations Officer, said in a statement yesterday that the suspects were found with a revolver weapon and two vehicles.

Saviour Gbarale, 24, and Onyedikachi Uhala, 18, of No. 12 Etche Street, Borikiri, Port Harcourt City Local Council, are among the suspects.

According to Iringe-Koko, the duo specialized in housebreaking and have been linked to a string of recent armed robberies in Port Harcourt and its vicinity.

He further stated that investigations found that the suspects raped and sexually abused a pregnant woman in the course of their nefarious operations.

According to her, on July 24, while on normal anti-crime patrol around Eleme Road intersection, C4i Intelligence Unit agents came across a gang of armed robbers. A police officer confronted them in a gunfight.

"They were subdued by the greater weaponry of the police," she stated. At Farm road, Eleme junction, Victor Okona,'m,' 23, and Onuoha John Odinaka, aka Precious' male, '22, were detained, while others escaped with minor injuries.

"One American Revolver pistol with breech number 134581 and one motorbike registered BGM 74VL were confiscated from the suspects, and efforts are being made to apprehend others who remain at large."

"Also, while on routine patrol at Teke Sogo in Tai Local Council, agents from the Command's Anti-Cultism Unit spotted an ash-colored Honda Odyssey bus with six occupants that lacked a registration number plate." When the motorist saw the cops, he took off at high speed, and the police squad chased after them to find out who they were and why they were fleeing. After a long trip, the occupants abandoned the vehicle and went into a nearby bush in the state's Teke Sogo Tai Local Council.

"The wrecked Honda Odyssey bus was found and towed to the station." A search of the abandoned vehicle revealed four PVCs, bags of stowage presumed to be cannabis, one jack knife, one plier, machetes, and face masks, among other items. The command has launched a detailed investigation to identify and apprehend the vehicle's occupants. In the same line, police investigations led to the arrest of three members of a car snatching ring in the state following recent accusations of car snatching at Sani Abacha Division. Gladstone Anderson, "m," 22, Emmanuel Hezekiah, "m," 26, and Chika Obiorah, "m," 29, were arrested along Amechi Drive in Obio/Akpor Local Council.

"During interrogation, it was discovered that the accused are members of a known syndicate that specializes in stealing automobiles from unsuspecting victims, primarily bolt/Uber drivers in and around the Sani Abacha/Casablanca region." They threaten their victims with a jack knife and strangle them with rope if they struggle. One Toyota Corolla saloon car, AAH 382 RM, in ash color, was retrieved. An increased effort is being made to apprehend additional members of the gang. "After the investigations are completed, all of the suspects will be charged in court."

He stated that criminals should have no place to hide in the state, ensuring that the momentum in the fight against crime, criminality, and other vices would be maintained for a safer Rivers State.

Content created and supplied by: obottex (via Opera News )