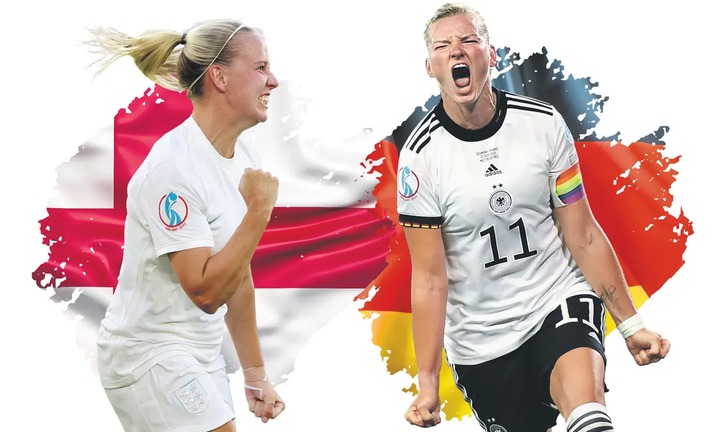 A resurgent England is set to clash with Germany, the most experienced and decorated side in the history of the tournament, in the finals of the UEFA Women’s EURO 2022, to be played at Wembley Stadium Sunday, July 31.

While a highly improved England is looking for their first tournament title, they will need to overcome Germany, 8-time winners in the history of the tournament to be able to do so, in a final that promises to be enthralling.

Germany has an intimidating record against England in the overall record of their meetings with 24 wins, 4 draws, and two losses.

However, what appears to be a gulf between these two sides has been considerably reduced as England beat Germany 3-1 in a friendly in Wolverhampton earlier this year.

The Lionesses had an easy run in the group stage winning all the way (scoring 14 goals and conceding none) but got their acid test in the quarter-final match against Spain when they fought from a goal down, to win 2-1 in extra time. They have a free-scoring attack going for them with Beth Mead as the point woman.

After their hard-fought victory over Spain in the Quarter-final, they appear to have attained a self-belief that buoyed them to a convincing 4-0 thrashing of Sweden in the Semi-final and are now deservedly in the final.

Die Nationalelf on their part got to the final on the back of a 2-1 slim victory over France in their semi-final encounter. They had also shown themselves to be a well-organized side in the tournament, overcoming a resilient Austrian side earlier before edging past France. They have to their credit a well-honed defense and sharp-shooting attack led by Alexandra Popp.

Interestingly, the two highest goal scorers in the tournament, Beth Mead and Alexandra Popp both on six goals each, are from England and Germany respectively, the two finalists, which makes the final a two-pronged battle – one for the title, and the other for the Golden Boot.

The main battle of the Final will be fought in the defense, as both teams are good in attack, and have each, one of the two most prolific attackers – Beth Mead for England, and Alexandra Popp for Germany.

The side that shows more resilience in defense and more resoluteness in attack will edge the other to a slim win.