By ReporterFK (self media writer) | 8 days ago 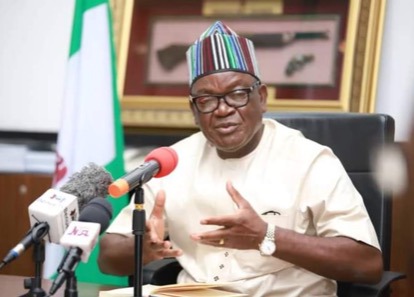 Governor of Benue State Samuel Ortom has warned Nigerians, especially those in positions of authority, to prepare for the work of reconstructing the nation following the founding fathers' intentions. When he welcomed a group from the Solomon Lar Foundation for a courtesy visit on Monday, August 1, 2022, at the Benue State Governor's Lodge in Asokoro, Abuja, the governor delivered the invocation.

The Governor bemoaned the fact that because the leaders deviated from the ideals established by the founding fathers, Nigeria was no longer the behemoth of Africa but instead was at the bottom, looking up to smaller nations.

He pointed out that leaders who came after people like Solomon Lar and JS Tarka missed possibilities in agriculture, solid minerals, culture, tourism, and population growth that could have helped Nigeria reach an admirable height.

As a beneficiary of Solomon Lar's political network, Governor Ortom emphasized that he would personally attend the event being planned to honor the founding father. He described Solomon Lar as a significant figure in Nigeria's political history.

The visit, according to Dr. Mike Omeri, Chairman of the Solomon Lar Foundation and Former Director General of the National Orientation Agency, was to inform Governor Ortom of their plans to honor Solomon Lar for his contributions to the establishment of democracy and the emancipation of the people.

The release of a book that the late nationalist personally penned to describe a lot of things he and others did to improve Nigeria will be among the events planned during an event honoring the late Solomon Lar, according to Dr. Omeri.

According to him, the Foundation also plans to build an Institute of Good Governance, Democracy, and Diplomacy to mentor the next generation and assist the populace in putting aside unimportant concerns when choosing leaders.

To ensure that the high standards he has established are upheld, the former NOA helmsman praised Governor Ortom for using the limited resources at his disposal to fulfill the promises he made to the Benue people. He also urged him to guide his successor.

Beni Lar, a member of the House of Representatives and the daughter of Solomon Lar, Princess Bolanle Ado, Hon. Hanatu Bugama, Alhaji Muhammed Sidi Abani, and Mr. Samaila Kaigama were among those who accompanied Dr. Omeri on the visit.

Let us know your thoughts in the comment section below.