By SportsBible (self media writer) | 11 days ago

The status quo is about change in the Premier League following the takeover of Newcastle United by a Saudi Arabian-backed consortium. It is a breath of fresh air as there is finally a club that can challenge the dominance of the Premier League's big six. 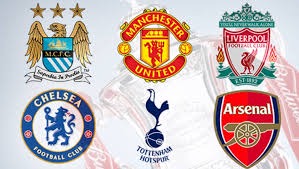 Different logos of the Premier League clubs that are regarded as the 'big six' (Photo credit: Vbet News)

Following the takeover, all that is expected to change in the coming years as the new owner of Newcastle United, Mohammed bin Salman, the Crown Prince of Saudi Arabia is reportedly about 13 times richer than the owner of Manchester City Sheikh Mansour.

With that being the case, it is expected that the Magpies will overtake some of the clubs that are currently regarded as the 'big six'. The club that drops out depends on the performance of their counterparts. For different reasons, it could be one of the following 3 clubs.

Liverpool's position among the top 6 is currently secured but it may not be in the coming years due to the club's desire not to spend more than they earn. While that is good, its disadvantage is they have not been able to replace their aging players. If they maintain the same policy while Newcastle spends as expected, the Magpies will overtake the Reds in a few years as the likes of Mohamed Salah and Sadio Mane would have passed their prime.

Arsenal's status as one of the 'big six' is currently under threat even without Newcastle spending a dime. The Gunners did not qualify for any European club competition this season and have not made the top 4 in several seasons. Like Liverpool, the major problem is the strict transfer policy which has seen them spend less than their 'big six' counterparts. It may not be long before Newcastle overtakes them.

Tottenham is the most likely to drop out even though they appear to be willing to spend. The problem is they are not as rich as the likes of Manchester City and Chelsea. Unless it will be called big seven in a couple of years I don't envisage Tottenham retaining its current status.

Which of the Premier League 'big six' do you think it will affect the most?