Knowing the end is near 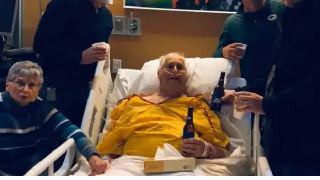 Even when in the hospital fighting sickness, there’s no way to know exactly when an individual will die. That was the case for 87-year-old Norbert Schemm from Appleton, Wisconsin. He knew he had terminal colon cancer but now, it was a waiting game.

Norbert didn’t want people coming to his hospital bed crying and upset. Instead, he wanted to do something special with his sons, something they could do together that they would remember. So, he invited them to his hospital room for beer. This man had a close relationship with his boys. So, they all enjoyed a cold bottle of beer. What better send-off than to do what they liked? What they didn’t expect was for the story to go viral.

Adam, Norbert’s grandson, took a photo of “all the guys” standing around the hospital bed with a cold beer in their hands. Rather than feeling sad, even at what could be a devastating time, they’re smiling and having fun. That’s when Adam uploaded the photo and the story on Twitter.

Seen by people near and far

Adam was amazed at just how quickly the photo circulated. As a result, he was contacted by several media outlets. As he explained to them, “That moment meant so much to my grandfather.”

A time to treasure

He continued on by saying, “You can tell they all know what’s gonna happen, and they just want to enjoy being together. They all have this look of closure.” That acceptance would make Norbert’s passing easier to deal with.

The time had come What’s ironic is that just one day after taking the photo, his grandfather died. But in his final moment, he knew he was surrounded by people he loved and who loved him. For this grandpa, dying was easier.

Norbert’s wife, whom he was married to for 65 years, was still alive. So, he didn’t have to worry as much about the grandkids. She’d still be around to shower them with love and affection.

“It was the last 90 minutes that they really had him. They drank beer and talked about family and he made everyone promise to take care of my grandmother. They were married 65 years.” Norbert wasn’t concerned about himself…just his wife and family. At first, Adam was hesitant to share the story but now, he’s glad he did. Since posting the photo, people have retweeted it over 30,000 times. Along with that, quite a few individuals shared their stories of losing a grandpa, too.

One tweet, in particular, stood out to Adam. It was from a man who said when he lost his dad this past May, the two of them watched a Yankee game while downing cold beer. Life is too short and precious. Always remember to tell your family how much you love them while they’re still alive.