By ChungleeWrites | self meida writer
Published 21 days ago - 76849 views 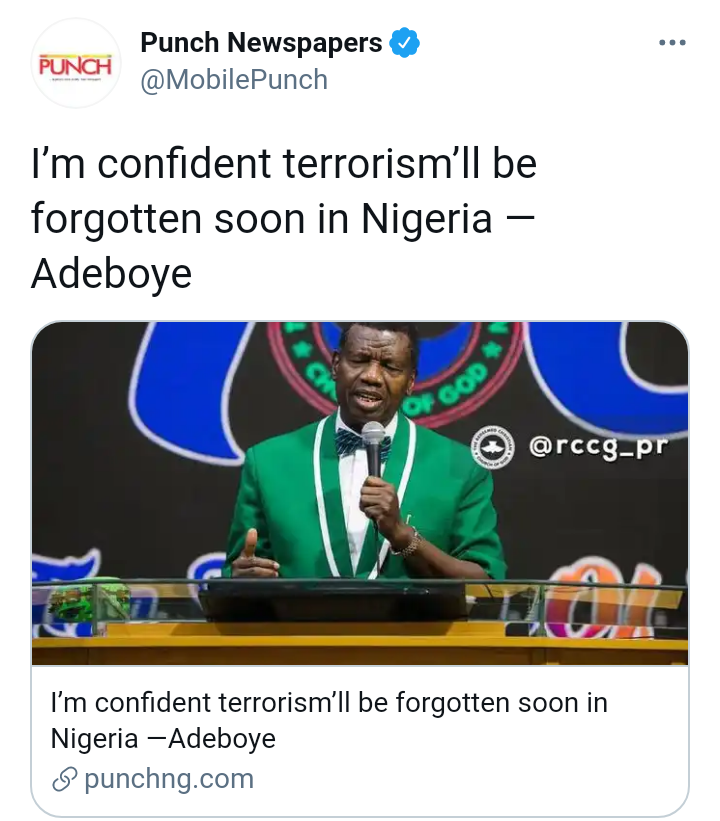 The General Overseer of the Redeemed Christian Church of God, Pastor Enoch Adeboye, on Friday, expressed confidence that terrorism will soon be forgotten in Nigeria.

He spoke at the virtual February 2021 Holy Ghost Service of the church with the theme, ‘God Bless You (2)’.

According to him, whatever has a beginning must have an ending, adding that every force laying siege on Nigeria would be disappointed.

For over 10 years, the Boko Haram terror group had killed hundreds of Nigerian civilians and soldiers in the North-East. The sect had also burnt down and bombed scores of villages as well as churches.

The Nigerian Army and the Presidency had at several times claimed the group had been ‘technically defeated’ and ‘weakened’ but the Abubakar Shekau’s bloodthirsty faction continues to strike with daring effrontery and crude savagery. 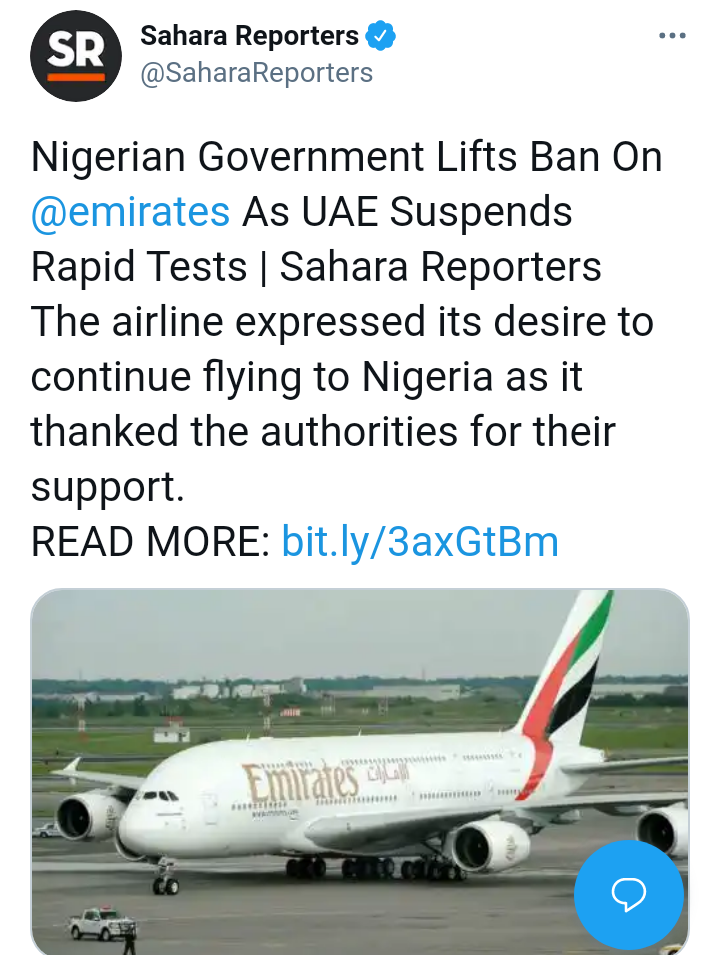 The Nigerian government has lifted the ban it earlier placed on Emirates Airlines.

This is coming after the United Arab Emirates granted the carrier permission to withdraw the Rapid Antigen Testing done prior to the departure of Emirates flights from Nigeria, according to a letter by the Nigerian Civil Aviation Authority.

Due to the development, the Presidential Task Force on COVID-19 directed the immediate lifting of the suspension placed on the operations of Emirates Airlines in Nigeria.

The letter signed by the Director-General of NCAA, Capt. Musa Nuhu expected the airline to comply with the directives by the PTF on COVID-19 and other protocols of the Nigerian government of Nigeria.

Similarly, the airline expressed its desire to continue flying to Nigeria as it thanked the authorities for their support. 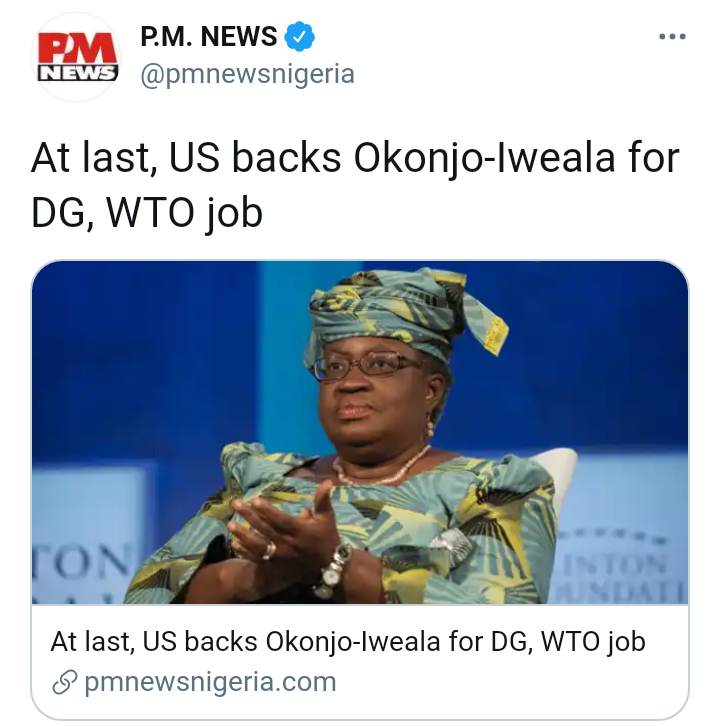 The United States has at last backed Nigeria’s former Minister of Finance, Dr. Ngozi Okonjo-Iweala for the Director General position at the World Trade Organisation, WTO.

This followed the stepping down of South Korea’s Yoo Myung-hee from the contest on Friday.

The US had blocked Okonjo-Iweala’s candidacy for the DG WTO job back in October after all member countries endorsed her candidacy.

A statement from the Office of the US Trade Representative on Friday said “The United States takes note of today’s decision by the Republic of Korea’s Trade Minister Yoo Myung-hee to withdraw her candidacy for Director-General of the World Trade Organization (WTO).”

The statement said the The Biden-Harris Administration was pleased to express its strong support for the candidacy of Dr. Ngozi Okonjo-Iweala as the next Director-General of the WTO.

It added that Dr. Okonjo-Iweala brings a wealth of knowledge in economics and international diplomacy from her 25 years with the World Bank and two terms as Nigerian Finance Minister. 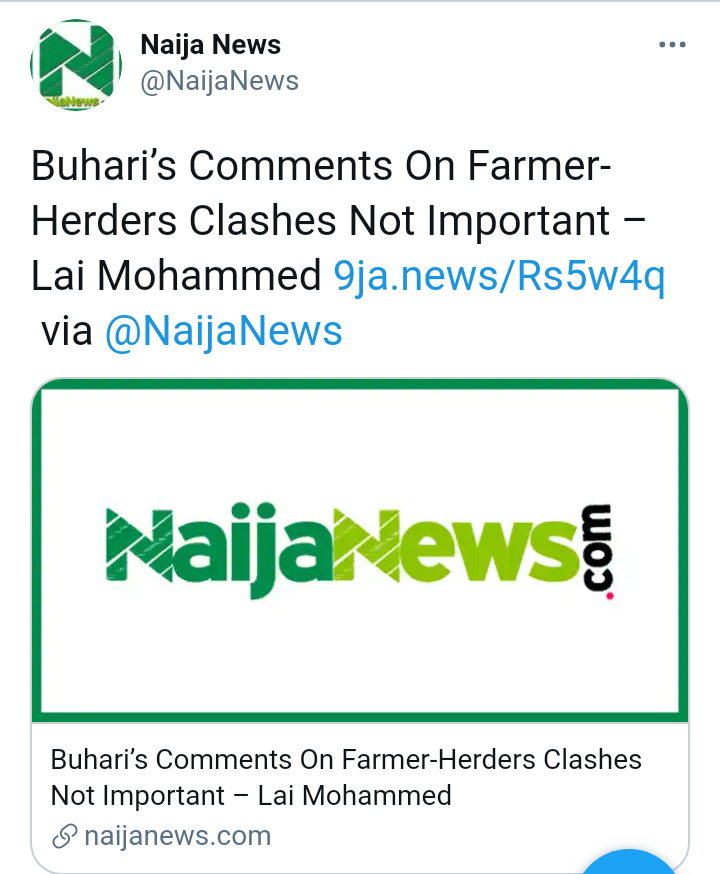 The Minister of Information, Lai Mohammed, has said the comments of President Muhammadu Buhari on the farmer-herder crisis is not important.

Mohammed made this known during a programme on Television Continental on Friday.

The minister noted that the steps the government is taking to resolve the conflicts are more crucial than President Buhari’s comments on the crises.

Mohammed advised all leaders and stakeholders not to fan the embers of disunity and reduce the tension in finding a solution to the farmer-herder crises. 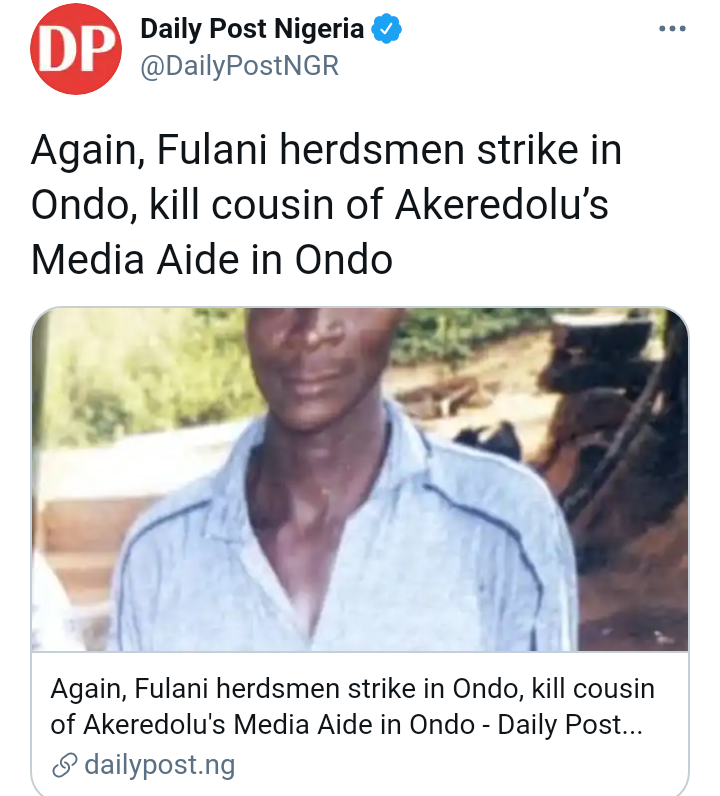 The cousin to one of the Media Aides to Governor Oluwarotimi Akeredolu was on Friday killed by suspected Fulani herdsmen in Ajowa Community in Akoko North West Local Area of Ondo State.

The deceased identified as Dayo Ibiye, who was a farmer and cousin to the Senior Special Assistant to Akeredolu on New Media, Gani Muhammed-Ajowa, was killed in his farm in Ajowa community.

The death of Ibiye was coming barely 24 hours after a member of the Oodua Peoples Congress, OPC, was also killed by bandits suspected to be herdsmen in Iju Community in Akure North Local Government Area of the state.

Ibiye was said to have been killed following an altercation with the herdsmen who had earlier made attempts to encroach on his farm with their herds of cattle.

According to Ajowa, his cousin was attacked by four Fulani herdsmen 24 hours after he was trailed to the farm by his assailants over his late cousin’s refusal to allow the Fulani herdsmen have access to his farm in order to feed their cows.

While disclosing that the herders after attacking Ibiye with machete which failed to penetrate his body, Ajowa stated that they overpowered him and twisted his neck backward to ensure that they completely snuffed life out of him.

When contacted, the Police Spokesperson in the state, ASP Tee-Leo Ikoro, who confirmed the incident stated that investigation had begun into the development. 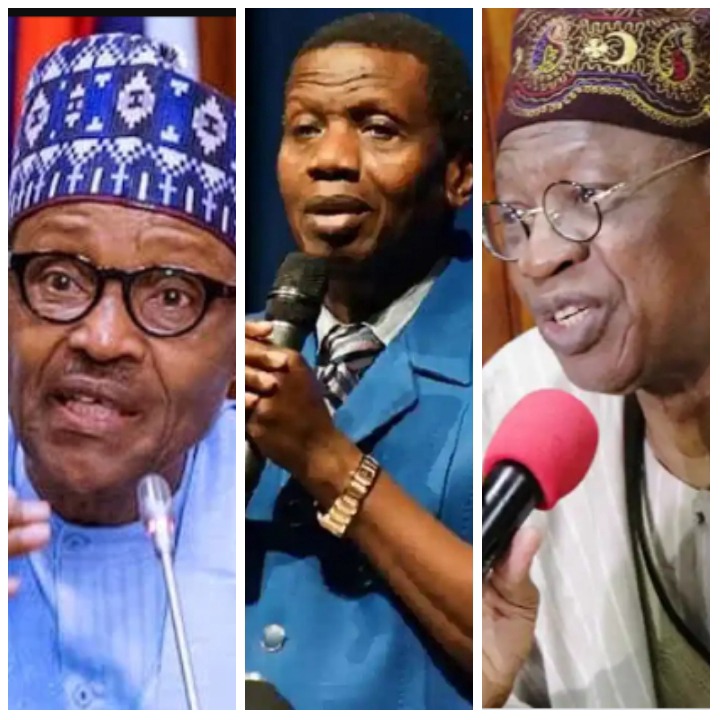 Do you think Muhammadu Buhari's comment is necessary in the ongoing crisis between farmers and Fulani?

As a faithful Nigerian, drop your comments in the comment section below and also share this article to all social media.

aliko dangote children bayelsa governorship election how to cook catfish pepper soup igberetv imsu cut off mark
Opera News is a free to use platform and the views and opinions expressed herein are solely those of the author and do not represent, reflect or express the views of Opera News. Any/all written content and images displayed are provided by the blogger/author, appear herein as submitted by the blogger/author and are unedited by Opera News. Opera News does not consent to nor does it condone the posting of any content that violates the rights (including the copyrights) of any third party, nor content that may malign, inter alia, any religion, ethnic group, organization, gender, company, or individual. Opera News furthermore does not condone the use of our platform for the purposes encouraging/endorsing hate speech, violation of human rights and/or utterances of a defamatory nature. If the content contained herein violates any of your rights, including those of copyright, and/or violates any the above mentioned factors, you are requested to immediately notify us using via the following email address operanews-external(at)opera.com and/or report the article using the available reporting functionality built into our Platform