Arsenal have lost 3-0 twice when they faced Manchester city in premier league and now would face them today at FA cup semi final round. Mikel Arteta would seek revenge at thands of city and make sure that they don't lost for the third time against a team with the second best attack this season. Arteta would have to make a good selection that would make him achieve that, any wrong move might likely result in exit. Granit Xhaka and Nicolas pepe are all standing the possible risk of being suspended for the next match if they get booked against Manchester city. 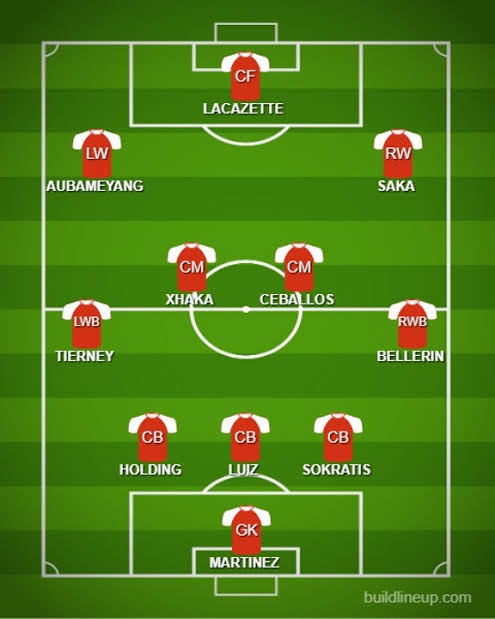 Arsenal would lineup strongly starting with Martinez who would still replace their injured First choice goal keeper Bernd Leno. The defensive back three would consist of Rob Holding, Sokratis and David Luiz, while Tierney and Bellerin would play an advance role but would be quick to return to defense during Manchester city counter attack.

At the Midfield, we shall see Granit Xhaka partner with Dani Ceballos. While Saka would replace Nicolas pepe at the right wing and Pierre-Emerick Aubameyang would be at the left wing, he have proven to be more effective from the right wing rather than as a top 9. Alexandre Lacazette who scored in their last match would probably lead the attack lines for arsenal.